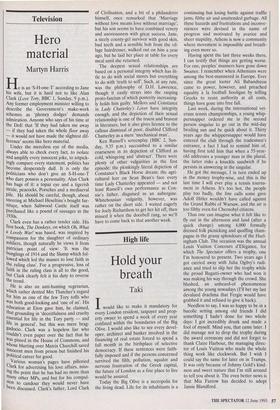 He is an `S-H-one-T' according to Jane his wife, but it is hard not to like Alan Clark (Love Tory, BBC 1, Sunday, 9 p.m.). Any former employment minister willing to describe the Government's make-work schemes as 'phoney dodges' demands admiration. Anyone who says of his time at the DoE that 'If they had taken me away — if they had taken the whole floor away — it would not have made the slightest dif- ference' seems like hero material.

Under the merciless eye of the media, always able to check every fact, to isolate and amplify every innocent joke, to nitpick- ingly compare every statement, politics has become desperately dull. It is only the politicians who don't give an S-H-one-T who dare possess a personality. Alan Clark has bags of it: a topaz eye and a tigerish stride; peacocks, Porsches and a mediaeval pile. He should be careful, though, about sneering at Michael Heseltine's bought fur- niture, when Saltwood Castle itself was Purchased like a pound of sausages in the 1930s.

Clark even has a rather tender side. His first book, The Donkeys, on which Oh, What a Lovely War! was based, was inspired by Compassion for the slaughter of ordinary soldiers, though naturally he views it from patrician point of view: 'It was the bunglings of 1914 and the Slump which fol- lowed which led the masses to lose faith in the ruling class'. For a progressive, loss of faith in the ruling class is all to the good, but Clark clearly felt it his duty to reverse the trend.

He is also an anti-hunting vegetarian, Which rather dented Mrs Thatcher's regard for him as one of the few Tory toffs who was both good-looking and 'one of us'. His education at Eton gave him, he claimed, that grounding in 'deceitfulness and cruelty essential for life in the Tory party — and life in general', but this was mere brag- gadocio. Clark was a hopeless liar who Couldn't even paper over the fact that he was pissed in the House of Commons, and "'hose blurting over Matrix Churchill saved Innocent men from prison but finished his Political career for good. Various woman's pages have pilloried Clark for advertising his love affairs, miss- ing the point that he has had no more than many other MPs, and but for his compul- sion to candour they would never have been discussed. Clark's father, Lord Clark of Civilisation, and a bit of a philanderer himself, once remarked that 'Marriage without love means love without marriage', but his son seems to have combined venery and uxoriousness with great success. Jane, a steely county-gel survivor with good skin, bad teeth and a sensible bob from the vil- lage hairdresser, walked out on him a year ago, but he laid her place at table for every meal until she returned.

The deepest sexual relationships are based on a personal integrity which has lit- tle to do with social mores but everything to do with 'truth to self. Such, at any rate, was the philosophy of D.H. Lawrence, though it easily strays into the rasping proto-fascism of which posterity increasing- ly holds him guilty. Mellors and Constance in Lady Chatterley's Lover have integrity enough, and the depiction of their sexual relationship is one of the truest and bravest in literature, but it also gives licence to the callous dismissal of poor, disabled Clifford Chatterley as a mere 'mechanical man'.

Ken Russell's screenplay (BBC 2, Sun- day, 9.35 p.m.) succumbed to a similar coarseness in its depiction of Clifford as cold, whingeing and 'abstract'. There were plenty of other vulgarities in the first episode: the plonkingly literal depiction of Constance's Black Horse dream; the agri- cultural leer on Sean Bean's face every time Lady Chatterley appeared — and not least Russell's own performance as Con- nie's father, disguised as an aubergine. Whitehousian vulgarity, however, was rather on the short side. I waited eagerly for Joely Richardson to get her kit off, then missed it when the doorbell rang, so we'll have to come back to that another week.