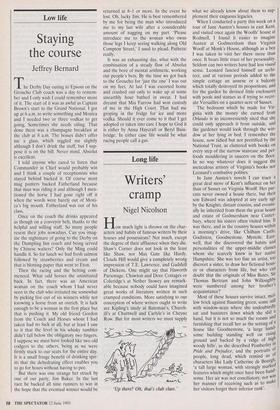 How much light is thrown on the char- acters and habits of famous writers by their houses and possessions? Not much, except the degree of their affluence when they die. Shaw's Corner does not look in the least like Shaw, nor Max Gate like Hardy. Clouds Hill would give a completely wrong impression of T.E. Lawrence, and Gadshill of Dickens. One might say that Haworth Parsonage, Chawton and Dove Cottages or Coleridge's at Nether Stowey are remark- able because nobody could have imagined great works of literature written in such cramped conditions. More satisfying to our conception of where writers ought to write are Kipling's study at Bateman's, Church- ill's at Chartwell and Carlyle's in Cheyne Row. But for most writers we must supply `Up there? Oh, that's club class.'

what we already know about them to sup- plement their exiguous legacies.

When I conducted a party this week on a tour of Jane Austen's houses in east Kent, and visited once again the Woolfs' house at Rodmell, I found it easier to imagine Austen at Godmersham than Virginia Woolf at Monk's House, although as a boy I was taken to visit her there more than once. It bears little trace of her personality. Seldom can two writers have had less visual sense. Leonard fancied himself an archi- tect, and at various periods added to the simple cottage an annexe or a balcony which totally destroyed its proportions, and for the garden he devised little enclosures with pools and statues as if trying to recre- ate Versailles on a quarter-acre of Sussex.

The bedroom which he made for Vir- ginia with the money she earned from Orlando is so inconveniently sited that she could only approach it from outside, and the gardener would look through the win- dow at her lying in bed. I remember the house, now tidied but not prettified by the National Trust, as cluttered with books on every step of the narrow staircase and pet- foods mouldering in saucers on the floor. In no way whatever does it suggest the meticulous artistry of Virginia's books nor Leonard's combative politics.

In Jane Austen's novels I can trace a great deal more of Kent's influence on her than of Sussex on Virginia Woolf. Her par- ents never owned a house there, but their son Edward was adopted at any early age by the Knights, distant cousins, and eventu- ally he inherited from them the great house and estate of Godmersham near Canter- bury, where his sisters often visited him. It was there, and in the country houses within a morning's drive, like Chilham Castle, Godinton, Goodnestone, Mystole, East- well, that she discovered the habits and personalities of the upper-middle classes whom she scarcely knew in her native Hampshire. She was too fine an artist, too discreet a sister, to draw her fictional hous- es or characters from life, but who can doubt that the originals of Miss Bates, Sir Thomas Bertram and John WilloughbY were numbered among her brother's acquaintance? Most of these houses survive intact, mel- low brick against flaunting green, some still with window-seats where she undoubtedly sat and banisters down which she slid a hand, but it is not so much the rooms and furnishing that recall her as the setting of a house like Goodnestone, 'a large hand- some building standing well on rising ground and backed by a ridge of high woody hills', as she described Pemberley in Pride and Prejudice, and the portraits of people, long dead, which remind us of characters like Lady Catherine de Bourga: `a tall large woman, with strongly marked features which might once have been hand- some. Her air was not conciliatory, nor was her manner of receiving such as to make her visitors forget their inferior rank'.