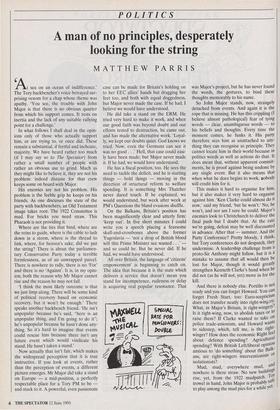 A man of no principles, desperately looking for the string

sea on an ocean of indifference.' The Tory backbencher's voice betrayed sur- prising venom for a chap whose theme was apathy. 'You see, the trouble with John Major is that there is no obvious quarter from which his support comes. It rests on inertia and the lack of any suitable rallying point for a challenge.'

In what follows I shall deal in the opin- ions only of those who actually support him, or are trying to, or once did. These remain a substantial, if fretful and inchoate, majority. We have heard rather too much (if I may say so to The Spectator) from rather a small number of people with rather an obvious axe to grind. Much as they might like to believe it, they are not his problem: indeed distaste for that crew keeps some on board with Major.

His enemies are not his problem. His problem is the feeble grip he keeps on his friends. As one discusses the state of the party with backbenchers, an Old Testament image takes root. The 1922 Committee is mud. For bricks you need straw. This Pharaoh is not providing it.

Where are the ties that bind, where are the reins to guide, where is the cable to lash down in a storm, where is the thread to link, where, for heaven's sake, did we put the string? There is about the parliamen- tary Conservative Party today a terrible formlessness, as of an unwrapped parcel. There is nowhere to rally, there is no `For' and there is no 'Against'. It is, in my opin- ion, both the reason why Mr Major cannot rise and the reason he may not fall.

`I think the most likely outcome is that we just limp along. There will be some kind of political recovery based on economic recovery, but it won't be enough.' There speaks another backbench friend. `He isn't unpopular because he's said, "here is an unpopular thing, and I'm going to do it"; he's unpopular because he hasn't done any- thing. So it's hard to imagine that events could rescue him because there isn't any future event which would vindicate his stand. He hasn't taken a stand.'

Now actually that isn't fair, which makes the widespread perception that it is true instructive. If you look at events, rather than the perception of events, a different picture emerges. Mr Major did take a stand on Europe — a mid-position, a perfectly respectable place for a Tory PM to be and stuck to it. A powerful, even passionate case can be made for Britain's holding on to her EEC allies' hands but dragging her feet too, and both with equal doggedness, but Major never made the case. If he had, I believe we would have understood.

He did take a stand on the ERM. He tried very hard to make it work, and when our good faith was beyond doubt and our efforts tested to destruction, he came out, and has made the alternative work. 'Loyal- ly, we kept our doubts quiet. God knows we tried. Now, even the Germans can see it was no good . . Hell, that case could easi- ly have been made; but Major never made it. If he had, we would have understood.

He has a fiscal position, too. He sees the need to tackle the deficit, and he is starting things — bold things — moving in the direction of structural reform to welfare spending. It is something Mrs Thatcher never dared touch. If he explained, we would understand, but week after week at PM's Questions the bland evasions shuffle.

On the Balkans, Britain's position has been magnificently clear and utterly firm: `keep out'. In five short minutes I could write you a speech placing a fearsome skull-and-crossbones above the former Yugoslavia — `not a drop of British blood will this Prime Minister see wasted . . .' and so could he. But he never did. If he had, we would have understood.

All over Britain, the language of `citizens' empowerment' is beginning to catch on. The idea that because it is the state which delivers a service that doesn't mean you stand for incompetence, rudeness or delay is acquiring real popular resonance. That was Major's project, but he has never found the words, the gestures, to bind these thoughts memorably to his name.

So John Major stands, now, strangely detached from events. And again it is the rope that is missing. He has this crippling (I believe almost pathological) fear of tying words — clear, unambiguous words — to his beliefs and thoughts. Every time the moment comes, he funks it. His party therefore sees him as unattached to any- thing they can recognise as principle. They cannot locate him in their world because in politics words as well as actions do that. It does mean that, without apparent commit- ments, he is proof against being undone by any single event. But it also means that when what he does begins to work, Gobody will credit him for it.

This makes it hard to organise for him, but it also makes it very hard to organise against him. `Ken Clarke could almost do it now,' said my friend, `but he won't.' No, he won't, and nor am I sure he could. Major's enemies look to Christchurch to deliver the final push but I doubt that. At the rate we're going, defeat may be well discounted in advance. After that — summer. And the Party Conference? Pretty bloody, I think, but Tory conferences do not despatch, they undermine. A leadership challenge from a proto-Sir Anthony might follow, but it is a mistake to assume that all would then be lost for Major, though it would greatly strengthen Kenneth Clarke's hand when he did not (as he will not, yet) move in for the kill.

And there is nobody else. Portillo is not ready and you can forget Howard. You can forget Fresh Start, too: Euro-scepticism does not transfer neatly into right-wingcrY What, in Major's Britain, is right-wingerY1 Is it right-wing, now, to abolish taxes or to raise them? If Clarke wanted to take on police trade-unionism, and Howard wants to sidestep, which, tell me, is the right' winger? How does the economic Right feel about defence spending? Agricultural spending? With British Left/liberal opitli°11 anxious to `do something' about the Balk' ans, are right-wingers interventionists or isolationists? Mud, mud, everywhere mud, and nowhere is there straw. No new buildings rise, yet, from the 1922 mudpatch. Toy trowel in hand, John Major is probably sat' to play among the mud pies for a while yet.