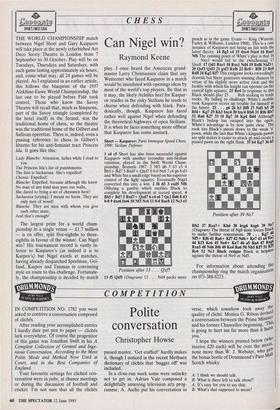 THE WORLD CHAMPIONSHIP match between Nigel Short and Gary Kasparov will take place at the newly refurbished Art Deco Savoy Theatre in London from 7 September to 30 October. Play will be on Tuesdays, Thursdays and Saturdays, with each game lasting approximately six hours, and, come what may, all 24 games will be played. As I explained in an earlier article, this follows the blueprint of the 1937 Alekhine-Euwe World Championship, the last one to be played before Fide took control. Those who know the Savoy Theatre will recall that, much as Simpsons, part of the Savoy triangle (completed by the hotel itself) in the Strand, was the traditional home of chess, so the theatre was the traditional home of the Gilbert and Sullivan operettas. There is, indeed, even a passing reference to chess in Gilbert's libretto for his anti-feminist tract Princess Ida. It goes like this:

Lady Blanche: Attention, ladies while I read to you The Princess Ida's list of punishments.

The first is Sacharissa. She's expelled!

Blanche: Expelled, because although she knew No man of any kind may pass our walls, She dared to bring a set of chessmen here!

Sacharissa (crying): I meant no harm. They are only men of wood!

Blanche: They are men with whom you give each other mate, And that's enough!

The largest prize for a world cham- pionship in a single venue — £1.7 million — is on offer, split five-eighths to three- eighths in favour of the winner. Can Nigel win? His tournament record is vastly in- ferior to Kasparov's (as indeed it is to Karpov's) but Nigel excels at matches, having already despatched Speelman, Gel- fand, Karpov and Timman in convincing style en route to this challenge. Fortunate- ly, the championship is decided by match play. I once heard the American grand- master Larry Christiansen claim that any Westerner who faced Kasparov in a match would be inundated with openings ideas by most of the world's top players. Be that as it may, the likely Achilles heel for Kaspar- ov resides in the risky Sicilians he tends to choose when defending with black. Para- doxically, though, Kasparov has fared rather well against Nigel when defending the theoretical highways of open Sicilians. It is when he faces something more offbeat that Kasparov has come unstuck.

For information about attending the championship ring the match organisation on 071-388-8223.