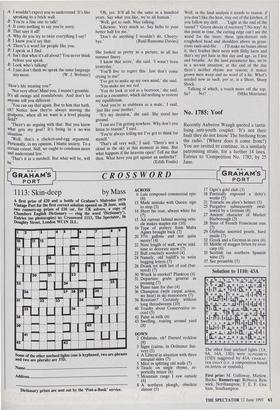 A first prize of £20 and a bottle of Graham's Malvedos 1979 Vintage Port for the first correct solution opened on 28 June, with two runners-up prizes of £10 (or, for UK solvers, a copy of Chambers English Dictionary — ring the word 'Dictionary'). Entries (no photocopies) to: Crossword 1113, The Spectator, 56 Doughty Street, London WC1N 2LL.

Some of the other unclued lights (one is hyphened, two are phrases and two are plurals) are 37D.