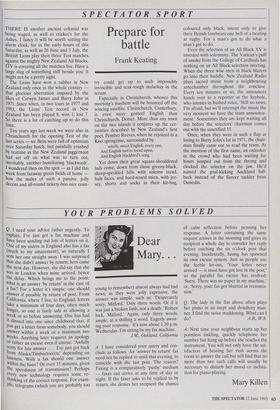 THERE IS another ancient colonial war being waged, as well as cricket's for the Ashes. I fancy it will be worth setting the alarm clock, for in the early hours of this Saturday, as well as 26 June and 3 July, the British Lions play their three Test matches against the mighty New Zealand All Blacks. ITV is covering all the matches live. Have a large slug of something stiff beside you: it might not be a pretty sight.

The Lions have won a rubber in New Zealand only once in the whole century that glorious aberration inspired by the likes of Carwyn James and Barry John in 1971. Since when, in two tours in 1977 and 1983, the Lions' Test record in New Zealand has been played 8, won 1, lost 7. So there is a lot of catching up to do this time.

Ten years ago last week we were also in Christchurch for the opening Test of the last series — we Brits were full of optimism over Saturday lunch, but painfully crushed by teatime as the New Zealand juggernaut had set off on what was to turn out, inevitably, another humiliating `blackwash'. I wondered then on the spot — as I did this week from faraway green fields of home how the males of such a passive, jolly decent and all-round tickety-boo nice coun-

try could get up to such impossibly invincible and teak-tough malarkey in the Krum.

Especially in Christchurch, whence this morning's mayhem will be bounced off the wincing satellite. Christchurch, Canterbury, is even more genteel English than Christchurch, Dorset. More than any town on the two islands it conjures up the cer- tainties described by New Zealand's first poet, Pember Reeves, when he rejoiced in a Kiwi springtime, surrounded by

Yet down their great square-shouldered lads come, down from those greeny-black, sheep-speckled hills with solemn tread, hale faces, and hard-nosed mien, with jer- sey, shorts and socks in their kit-bag, coloured only black, intent only to give their British forebears one hell of a beating at rugby. For a man's got to do what a man's got to do.

Even the selection of an All Black XV is invested with solemnity. The Vatican's puff of smoke from the College of Cardinals has nothing on an All Black selection meeting. When the three wise men in black blazers go into their huddle, New Zealand Radio plays sacred music from a neighbouring antechamber throughout the conclave. Every ten minutes or so, the announcer hands over to a reporter at the keyhole, who intones in hushed voice, 'Still no news, I'm afraid, but we'll interrupt the music the very moment we have the team announce- ment.' Sometimes they are kept waiting all day before the selectors' chairman comes out with the sanctified 15.

Once, when they were in such a flap at losing to Barry John's lot in 1971, the chair- man finally came out to read the team. At the mention of the first name, an onlooker in the crowd who had been waiting for hours jumped out from the throng and clocked the selector on the jaw. He'd named the goal-kicking Auckland full- back instead of the fiercer tackler from Dunedin.