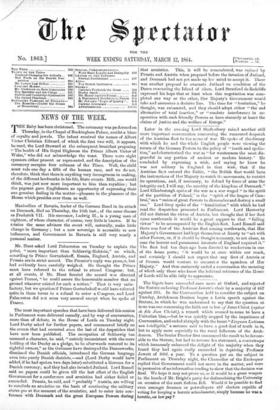 Mr. Hunt asked Lord Palmerston on Tuesday to explain the

point, "more important than Schleswig-Holstein," on which, according to Prince Gortschakoff, Russia, England, Austria, and Prussia are in strict accord. The Premier's reply was prompt, but had evidently been carefully weighed. He thought the Prince must have referred to the refusal to attend Congress; but, at all events, if Mr. Hunt fancied the accord was directed, against France, " he could assure the honourable member that no ground whatever existed for such a notion." That is very satis- factory, but we question if Prince Gortschakoff would have referred quite in those terms to a refusal to enter a Congress, and Lord Palmerston did not seem very assured except when he spoke of France.