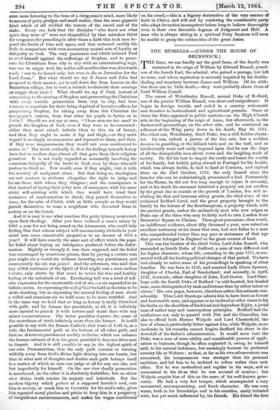 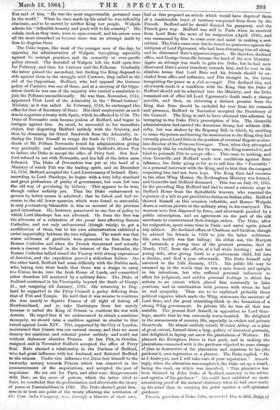 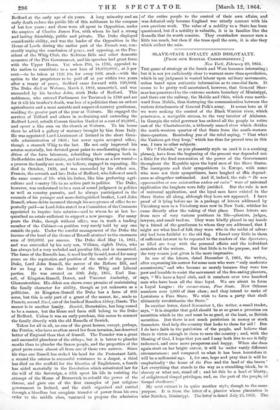 THE RUSSELLS.—(UNDER THE HOUSE OF BRUNSWICK.) MIIE fame, we can

hardly say the good fame, of the family was sustained in the reign of William by Edward Russell, grand- son of the fourth Earl, the admiral, who gained a peerage, but left no issue, and whose reputation is seriously impaired by his double- dealing and treachery between James and William. Of his abili- ties there can be little doubt,—they were probably above those of Lord William Russell.

The career of Wriothesley Russell, second Duke of Bedford, son of the patriot William Russell, was short and insignificant. It began in foreign travels, and ended in a country retirement and devotion to horticultural and agricultural pursuits. Once or twice the Duke appeared in public matters—on the High-Church side in the beginning of the reign of Anne, but afterwards, in the Sacheverell proceedings, on the other side, and he continued an, adherent of the Whig party down to his death, May 26, 1711.

His eldest son, Wriothesley, third Duke, was a still feebler. charac- ter. He was, indeed, a patron of the fine arts, but a reckless devotee to gambling at the billiard table and on the turf, and so intellectually weak and easily imposed upon that he was the dupe of all the disreputable men about town and the laughing-stock of society. He did his best to impair the credit and lessen the wealth of his family, but luckily going abroad to Portugal for his health; which was always feeble, he had to land at Corunna, and expired there on the 23rd October, 1732, the only Russell since the founder who can be unhesitatingly pronounced a fool. Fortunately for the House, he did not live long enough to injure it seriously, and at his death his successor inherited a property not yet swollen by the great rise in rentals or the growth of I.ondou, but still in-. eluding the first and immense abbey grants, the chief share of the reclaimed Bedford Level, and the great property brought to the family by the heiress of the Southamptons, a property which, with the ancient grants, makes the melancholy man who now reigns as. Duke one of the three who may be fairly said toown London from Brunswick Square to Chelsea. These great possessions, then worth, on indifferent evidence, about fifty thousand a year, now valued on excellent testimony at six times that sum, had now fallen to a man who comprehended better than any peer or statesman of that age that power belonged in England to the great owners of land.

This was the brother of the third Duke, Lord John Russell, who

succeeded as fourth Duke of Bedford, a man of very different and far higher character, whose life, extending to the year 1771, is con- nected with all the leading political changes of that period. We have had already to notice some of his proceedings in speaking of other families. He was born in 1710, 'and married Lady Diana Spencer, daughter of Charle-s, Earl of Sunderland; and secondly, in April, 1737, Gertrude, eldest daughter of John, Earl Gower. Lord Stan- hope calls the fourth Duke of Bedford "a cold-hearted, hot-headed man, more distinguished by rank and fortune than by either talent or virtue." His own pages, however, elsewhere soften this estimate con:- siderably. Thus Lord Stanhope adinits him to have been an honeSt and honourable man, and appears to be inclined at other times to lay his faults on the shoulders of his friend and dependent Rigby, a jovial man of rather easy and unscrupulous principles. Bedford had the misfortune not only to quarrel with Pitt and the Grenvilles, bat also to offend both Horace Walpole and Lord Chesterfield, the last of whom is particularly bitter against him, while Walpole, more moderate in his remarks, cannot forgive Bedford his share in the downfall of his father's administration. It would seem tnat the Duke was a man of some-ability and considerable powers of appli- cation to business, though he often neglected it, owing, he himself said, to his natural indolence, but seemingly because he preferred country life at Woburn ; so that, as far as his own advancement was concerned, his temperament was stronger than his personal ambition, and led him to be inclined to refuse rather than seek office. Yet he was methodical and regular in his ways, and sa economical in his ideas that he was accused of avarice ; but- Walpole acquits him of this on the score of his well-known gene- rosity. He had a very hot temper, which accompanied a very unreserved, uncompromising, and frank character. He was very warm, both in his friendships and in his enmities, easily irritated with, but yet much influenced by, his friends. His friend the first Fox said of him, " He was the most ungovernable governed man In the world." When he once made up his mind he was inflexibly -obstinate, and to be moved by neither King nor people. Walpole admits his "inflexible honesty and good-will to his country." His cabals, such as they were, were in open council, and his errors were all the more remarked on because there was no attempt made by bim to disguise them.

Bedford at the early age of six years. A long minority and an early death reduce the public life of this nobleman to the compass of but few years ; and these were all spent in Opposition, under the auspices of Charles James Fox, with whom he had a strong and lasting friendship, public and private. The Duke displayed considerable ability, and was the leader of the Opposition in the House of Lords during the earlier part of the French war, con- stantly urging the conclusion of peace, and opposing, as the Pre- sident of the Whig Club, the Sedition Bills and other domestic measures of the Pitt Government, and his speeches had great force with the Upper House. Yet when Pitt, in 1796, appealed to the nation to contribute to a new loan of 18,000,0001., at 5 per cent.—to be taken at 1121. 10s. for every 1001. stock—with the option to the proprietors to be paid off at par within two years after a treaty of peace, Bedford came forward with 100,0001. The Duke died at Woburn, March 2, 1802, unmarried, and was succeeded by his brother John, sixth Duke of Bedford. This nobleman, who entered Parliament for Tavistock in 1788 and sat for it till his brother's death, was less of a politician than an ardent agriculturist and a most amiable and respected country gentleman, residing the greater part of the year at Woburn. He engaged the services of Telford and others in re-draining and extending the Bedford Level, rebuilt Covent Garden Market at a cost of 40,0001., and spent a' like sum on the church at Woburn. To his house there he added a gallery of statuary brought by him from Italy. He was appointed Lord-Lieutenant of Ireland in the short Gren- ville administration of 1806 ; but never - again accepted office, though a staunch Whig to the last. He not only improved his estates materially, but devoted great pains to ameliorating the con- dition of the farm labourers, rebuilding their cottages both in Bedfordshire and Devonshire, and re-letting them at a low rental— a process the familyare now, we believe, engaged in repeating. He died in October, 1839, and was succeeded by his eldest son, Francis, the seventh and late Duke of Bedford, who followed much the same course of life with his father, like him preferring agri- culture and country life to an active part in politics. The Duke, however, was understood to be a man of sound judgment in politics as well as country- pursuits, and he always participated in the counsels of his younger and more distinguished brother, Lord John Russell, whose debts incurred through his acceptance of office he re- peatedly paid—as Lord John stated to a Committee of the Commons appointed to inquire into salaries—and to whom he at last be- queathed an estate sufficient to support a new peerage. For many years the Duke, though without office, was in truth a leading member of the Cabinet—a position very rarely held by any one outside its pale. Under the careful management of the Duke the income of the head of the House of Russell attained to the enormous sum of 300,0001. per annum. The Duke died May 14, 1861, and was 'succeeded by his only son, William, eighth Duke, who has always led a very secluded and peculiar life, and is unmarried. The fame of the Russells has, it need hardly be said, rested for many years on the reputation and position of the uncle of the present Duke, Lord John Russell, the mover of the Reform Bill, and for so long a time the leader of the Whig and Liberal parties. He was created on 30th July, 1861, Earl Rus- sell, of Kingston-Russell, Dorset, and Viscount Amberley, of Gloucestershire. His eldest son shows some promise of maintaining the family character for ability, though as yet unknown as a politician. At Kingston-Russell the Duke has a farm of 800 acres, but this is only part of a grant of the manor, &c , made to Francis, second Earl, out of the lands of Beaulieu Abbey, Hants. The manor is in another family. Bewick, Dorset/shire, has long ceased to be a manor, but the liouse and farm still belong to the Duke of Bedford. Unless it was an early purchase, this seems to connect the family directly with the old Russells of Bewick.

Taken for all in all, no one of the great houses, except, perhaps, the Percies, who have so often saved her from invasion, has deserved better of England than that of Russell. The Founder was a great and successful plunderer of the abbeys, but it is better to plunder monks than to plunder the Saxon people, and the properties of the great peers came almost all from one of those two sources. Since his time one Russell has staked his head for the Protestant faith, a second the estates in successful resistance to a despot, a third has died' on the scaffold for the liberties of Englishmen, a fourth has aided materially in the Revolution which substituted law for the will of the Sovereign, a fifth spent his life in resisting the attempt of the House of Brunswick to rebuild the power of the throne, and gave one of the first examples of just religious government in Ireland, and the sixth organized 'and carried through a bloodless but complete transfer of power from his own order to the middle class, ventured to propose the admission

of the entire people to the control of their own affairs, and was defeated only because England was utterly content with his own previous work. The value of a nobility to a State has been questioned, but if a nobility is valuable, it is in families like the Russells that its worth consists. They overshadow meaner men a little too much, but then if the trees spoil the corn, it is also they which collect the rain.