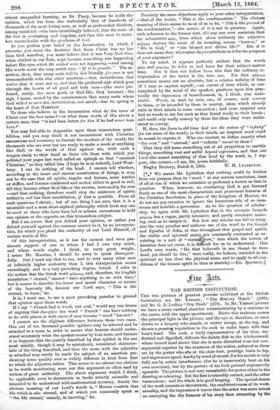 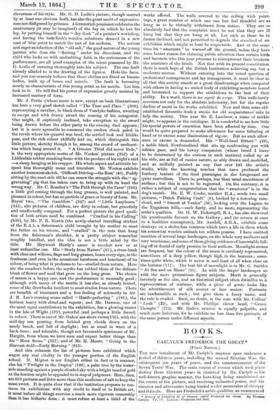 THE two pictures of greatest promise exhibited at the British institution are Mr. Yeames', "The Buttery Hatch" (499), and Mr. G. D. Leslie's "Dry Dock" (376). In Mr. Yeames' picture we have a stone vaulted chamber communicating by a staircase in the centre with the upper apartments. Down this staircase comes the principal light in the picture, and the eye is, therefore, at once drawn to a lacquey who stands, or rather stoops, at the top, and shouts a pressing requisition to the cook to make haste with that boar's head. The cook, a burly representative of his class, un- flurried and dignified, delivers the dainty dish to the kitchenmaid, whose turned head shows that she is more disturbed than her con- sequential superior by the summons of the waiter, enforced as these are by the porter who sits at the stair-foot, porridge basin in lap, and urges more speed, hardly byword of mouth (for his mouth is very full) nor by active interference (for he is immoveably bent on his own concerns), but by the gesture of his fork pointed expressively upwards. The picture is not very remarkable for power either in the drawing or colouring. But the first is tolerably correct, and the other harmonious ; and the whole is in good keeping. The special charm of the work consists in its restraint, the unobtrusiveness of its work- manship, and the impression it leaves that the artist was more intent on conveying the dry humour of his story than attracting by the

cleverness of his style. Mr. G. D. Leslie's picture, though marred by at least one obvious fault, has also the great merit of expressive- ness not disfigured by grimace. A Greenwich pensioner celebrates the anniversary (it may be imagined) of the day on which he lost his leg, by putting himself in the " dry dock " of a painter's workshop, and having the losta limb's wooden substitute dressed in a new coat of blue paint to match the rest of his uniform. The serious and eager satisfaction of the " old salt," the good nature of the young painter who does the " flatting " under his directions, and the child who looks on with undoubting faith in the seriousness of the performance, are all good examples of the talent possessed by Mr. G. Leslie of entering thoroughly into his subject. The one fault already alluded to is the drawing of the figures. Hide the faces, and you can scarcely believe that those clothes are fitted on human bodies, built up of bones and muscle. The fault is becoming nearly as characteristic of this young artist as his merits. Let him look to it. He will find his power of expression greatly assisted by increased mastery of form.

Mr. J. Pettie (whose name is new, except on book illustrations) has here a eery good sketch called "The Time and Place " (308), representing a cavalier, in black dress of Vandyke fashion, awaiting in cuerpo and with drawn sword the coming of his antagonist. One might, if captiously inclined, take exception to the sword being drawn before the other party to the corning duel appears ; but it is more agreeable to commend the sunken cheek paled in the revels where his quarrel was bred, the settled look and lifelike pose, and the rich colour skilfully laid on, which distinguish this little picture, sketchy though it be, among the crowd of mediocri- ties which hang around it. "A Greater Thief did never Ride," is the very appropriate motto of Mr. Weekes' picture (352) of a Liddesdale robber sneaking home with the produce of his night's raid —a sheep hanging at his crupper. His whole aspect and attitude be- speak him thoroughly mean and truculent. Mr. Weekes exhibits another humorous sketch, "Difficult Driving—the Rest" (40), Paddy sitting by the road-side till he can renew the struggle with the " ag- gravating" pig that has taken care to bring up with its head the wrong way. Mr. C. Rossiter's " The Path through the Tares" (346), a little girl coming through the long grasses, is well painted, and pleasant in colour, but has no particle of grace or beauty of form. Mr. Bayes' two, "The Gamblers" (347) and "Little Lazybones '' (445), also pictures of children, are dirty in colour, but gracefully and unaffectedly compesed. For a perfect picture the good quali- ties of both artists need be combined. "Cradled in his Calling" (620), by Mr. P. R. Morris (the newly-elected travelling student of the R.A.), a fisherman's child brought by his mother to meet the father on his return, and " cradled" in the nets that hang from the fisherman's shoulder, is a pretty subject somewhat roughly handled, and the idea is not a little aided by the title. Mr. Heywood Hardy's name is another new or at least unfamiliar one. His " Study from Nature" (67), a river-bank with elms and willows, flags and long grasses, bears every sign, in the freshness (and even in the occasional harshness and heaviness) of its colour, of being what it professes to be—studied from nature. Here are the meadows before the scythe has robbed them of the delicate blush of flower and seed that grow on the long grass. The choice of season is a happy one, and the performance is unusually good ; although with many of the merits it has also, as already hinted, some of the drawbacks incident to most studies from nature. There are breadth of treatment and a fine feeling of solemnity in Mr. J. R. Lee's evening scene called " Heath-gathering " (181), the horizon heavy with cloud and vapour; and Mr. Dawson, one of the most equal contributors to the exhibition, has a glowing sunset in the Isle of Wight (179), powerful (and perhaps a little forced) in colour. There is one of Mr. Oakes' sea-shore views(156), with the mid-day sun pouring from behind grey clouds down on the sandy beach, and full of daylight; but as usual in want of a back-bone : and tolerable, though not favourable specimens of Mr. Hargitt, from whom we have seen and expect better things than his " Moor Scene" (327), and of Mr. H. Moore, " Going to the Harvest-field—Early Morning" (613).

And this exhausts the list of pictures here exhibited which augur any real vitality in the younger portion of the English school. M. Mignot is not English either in fact or in manner, else his "Twilight in the Tropics" (109), a palm tree by the water- side standing against a purple clouded sky with a bright band of gold at the horizon might be appealed to in stayof judgment. Here, then, are 633 pictures and little more than this modicum of salt to keep the mass sweet. It is quite clear that if the institution proposes to con- tinue its exhibitions with any credit to itself or to British art, it must before all things exercise a much more vigorous censorship than it has hitherto done : it must refuse at least a third of the

works offered. The walls covered to the ceiling with paint- ings, a great number or which one can but feel thankful are so hung as to be virtually withdrawn from notice. They are so absolutely bad that the complaint must be not that they are ill hung but that they are hung at all. Let such as these be in future declined, and not permitted to degrade the standard of an exhibition which might at least be respectable. And at the same time let " amateurs " be warned off the ground, unless they have some better reason for claiming public attention than certain lords and baronets who this year presume to misrepresent their brethren the amateurs of the brush. Not that with its present constitution there is much hope of the British Institution achieving any but a moderate success. Without entering into the vexed question of professional management and lay management, it must be clear to all that this society stands at a great disadvantage when compared with others in having no united body of exhibiting members bound and interested to support the exhibitions to the best of their ability. In a word, there is no esprit de corps. This sufficiently accounts not only for the absolute inferiority, but for the regular decline of merit in the works exhibited. Now and then some old- established favourite deals a stroke for old acquaintance' sake to help the society. This year Sir E. Landseer, a name of mickle might, re-appears in the catalogue. It is wonderful to see how little his special powers of execution have been affected by time. One would be quite prepared to make allowance for some faltering of hand or to excuse some diminution of vigour. But no such allow- ance or excuse is demanded. His " Well-bred Sitters" (68), a noble black Newfoundland that sits up confronting you with solemn gaze, and his tawny companion (whose breed I leave to be determined by the curious in such matters) coiled up at his side, are as full of canine nature, as ably drawn and modelled, and as skilfully painted as any that ever left the artist's studio, while the knowing touches that have produced the feathery texture of the dead ptarmigan in the foreground are quite marvellous. There is, perhaps, less than usual smoothness of surface ; but this is not to be regretted. On, the contrary, it is rather a subject of congratulation that the ",sweetener" is in the dog's mouth. Mr. E. W. Cooke, another R.A., sends two small pictures, "Dutch Fishing Craft" (8), backed by a towering rain- cloud, and " Sunset at Venice" (36), looking over the Lagune to the Euganean hills,--each fairly, and no more, representing the artist's qualities. Mr. H. W. Pickersgill, R.A., has also showered his questionable favours on the Gallery , and (to return at once to a healthier atmosphere), Mr. Ansdell, A.R.A., exhibits some donkeys on a shelterless common which have a life in them which his somewhat wooden animals too seldom possess. I have omitted mention of several large landscapes, on the whole very mediocre and very wearisome, and some of them giving evidence of lamentable fall- ing off or denial of early promise in their authors. Moonlight scenes are frequent, but the colour of the moon is carelessly represented, sometimes of a deep yellow, though high in the heavens ; some- times quite white, which it never is, and least of all when close on the horizon (117). The beat bit of moonlight is in Mr. G. Smith's " At Sea and on Shore" (85). As with the larger landscapes so with the more pretentious figure subjects. Merit is generally inversely as the size, and an historical subject often dwindles to a representation of costume, while a piece of genre looks like the advertisement of silk mercer or lace maker. Portraits are inadmissible as such ; but give them a fancy name, and the rule is evaded. Such, no doubt, is the case with Mr. Collins' " Leah " (22), and with Mr. Phillips clever head, " Grave Thought" (173). Mr. Halle's evasion is equally palpable, and much more ludicrous, for he exhibits no less than five portraits of