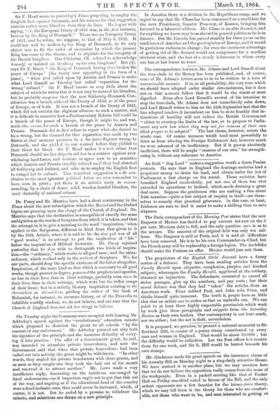 Page 2, 12 March 1864 — The correspondence between Mr. Adams and Lord Russell about the
Close

The correspondence between Mr. Adams and Lord Russell about the

iron-clads in the Mersey has been published, and, of course, some of Mr. Adams's letters seem to us to be written in a tone of unreasonable menace. It is, in all probability, the very tone which we should have adopted under similar circumstances, but it does not on that account follow that it would be the wisest or most dignified. Even after Lord Russell's avowal of his intention to stop the iron-clads, Mr. Adams does not immediately calm down, and Lord Russell writes to him on the 25th September last that the line adopted renders it incumbent on him to state frankly that in- timations of hostility will not induce the British Governor ent " either to overstep the limits of the law, or to propose to Parlia- ment any new law which they may not for reasons of their own think proper to be adopted." The last clause, however, covers the whole case. Of course menaces would tend most powerfully to deter us from altering the Foreign Enlistment Act, however much we were ashamed of its inefficiency. But if it proves absolutely inefficient, there will be ample "reasons of our own" for strength- ening it, without any reference to America.