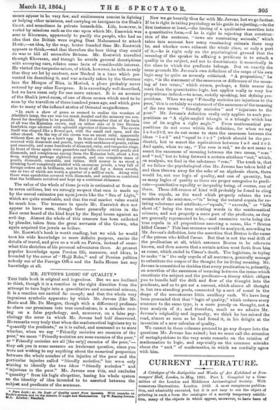 THIS little book is original and ingenious. But we are inclined to think, though it is a reaction in the right direction from the attempt to turn logic into a quantitative and numerical science, it is a reaction not carried far enough; and that the whole very ingenious symbolic apparatus by which Mr. Jevons (like Mr. Boole and Mr. De Morgan, though with a difference) professes to churn our premissea into true conclusions, is a mistake rest- ing on a false psychology, and, moreover, on a false psy- chology the error in which Mr. Jevons had half discovered. He remarks very truly that when the mathematical logicians try to "quantify the predicate," as it is called, and command us to state whether, when we say "Friendly societies are enemies of the poor," we mean "Friendly societies are some enemies of the poor," or " Friendly societies are all [the only] enemies of the poor,"— they ask you in some measure an irrelevant question, since you were not wishing to say anything about the numerical proportion between the whole number of the injuries of the poor and the particular injuries called " friendly societies," but were only wishing to identify the two ideas " friendly societies " and " injurious to the poor." Mr. Jevons sees this, and excludes "quantity" from his logic altogether, basing his whole system on the identity of idea intended to be asserted between the subject and predicate of the sentence.

* Pure Logic; Sr, the Logic of Quality apart from Quantity. With remarks on Boole's system and on the relation of Logic and Mathematics. liy W. Stanley Jevons, ILA. London : Stanford. Now we go heartily thus far with Mr. Jevons, but we go further. If he is right in taking psychology as his guide in rejecting,—in the first instance at least,—the forcing of a qualitative assertion into a quantitative form,—if he is right in rejecting that construe tion of the sentence, "cows are ruminating animals," which takes into account how many ruminating animals there may be, and whether cows exhaust the whole class, or only a part of it,—he is right only on the psychological ground that the meaning of the speaker in affixing a predicate is to attach a quality to the subject, and not to discriminate it numerically in the class to which the predicate belongs. But on exactly the same grounds Mr. Jecons's own definition of the scope of his own logic may be quite as severely criticized. " A proposition," he says, "is the statement of the sameness or difference of the mean- ing of two terms," which comes, perhaps, a little nearer the mark than the quantitative logic, but applies really to very few propositions indeed,—to none, strictly speaking, but defining pro- positions. When we say "Friendly societies are injurious to tho poor," this is certainly no statement of the sameness of the meaning of the two terms " friendly societies " and " injurious to the poor." Mr. Jevons's definition really only applies to such pro- positions as "A right-angled triangle is a triangle which has one of its angles a right angle." Even mathematical pro- positions do not come within his definition, for when we say 1+3=2+2, we do not mean to state the sameness between the ideas " 1+3" and " equal to 2+2 " (which should be the pre- dicate), but to assert the equivalence between 1+3 and 2+2. And again, when we say, " The rose is red," we do not mean to assert the sameness of meaning between the two terms, " rose " and " red," but to bring forward a certain attribute "red," which, on analysis, we find in the substance "rose." The truth is, that if we follow the psychological clue Mr. Jevons has taken hold of and then thrown away for the sake of an algebraic churn, there would be, not one logic of quality, and one of quantity, but as many logics of quality as there are proper categories to predi- cate—quantitative equality or inequality being, of course, one of them. These differences of kind will probably be found to cling to the copula, as the word which properly relates the two members of the sentence,—" is" being the natural copula for re- lating substance and attribute,—"equals," " exceeds," or "falls short of," being the true relating words in the mathematical sciences, and not properly a mere part of the predicate, as they are generally represented to be,—and causative verbs being the true copula in all propositions asserting a cause, like " Brutus killed Cmsar." This last sentence would be analyzed, according to Mr. Jevons's definition, into the assertion that Brutus is the name of the person who killed Cmsar. But that is not the real drift of the predication at all, which assumes Brutus to be otherwise known, and then asserts that a certain action went forth from him as cause, which ended in Cmsar's death. The logicians, in trying to make " is " the only copula of all sentences, generally manage to substitute the corpse of the thought for its living meaning. Mr. Jevons is committed to the idea that every predication is, primarily, an assertion of the sameness of meaning between the terms which constitute the subject and the predicate—a theory which obliges you to bundle half the drift and flow of the thought into the predicate, and so to get not a current, which almost all thought is, but two standing pools, connected by a sort of canal in the shape of the monotonous little auxiliary verb. We have long been persuaded that that " logic of quality," which reduces every sentence to the same type, is a mere parody on thought, not a true analysis of it ; and therefore, much as we admire Mr. Jevons's originality and ingenuity, we think he has missed the road, almost as soon as he had found it, in his delight at the invention of a new calculus of quality.

We cannot in these columns pretend to go any deeper into the questions Mr. Jevons has raised ; but we must call the attention of metaphysicians to the very acute remarks on the relation of mathematics to logic, and especially on the common mistake about the " unit " of mathematics, in which we cordially agree with him.