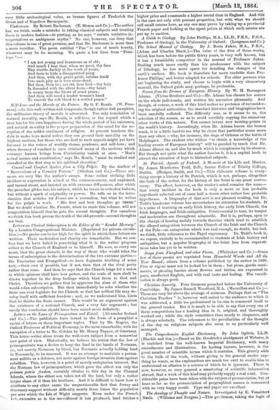 Page 24, 12 March 1864 — Letters on the Laws of Prbnogeniture and Entail. (Alexander Ireland
Close

Letters on the Laws of Prbnogeniture and Entail. (Alexander Ireland

and Co.)—The publishers have issued in the form of a pamphlet a series of letters on these important topics. That by Mr. Rogers, the Oxford Professor of Political Economy, is the most remarkable, with the exception of a letter to Mr. Cobden by Mr. Henry Tupper, of Guernsey. This letter-writer alone treats the well-worn subject from a somewhat new point of view. Historically, we believe his notion that the law of primogeniture was a device to keep the land in the hands of Normans, i.e., not merely Normans by blood, but Normans actually holding land in Normandy, to be unsound. It was an attempt to maintain a perma- nent militia as a defence, not more against foreign invasion than against rebellion. This, however, is a point of merely antiquarian interest. But the Norman law of primogeniture, which gave the eldest son only the prinut.m patris _leathern, certainly obtains to this day in the Channel Islands, where the eldest son takes not all the land, but only a rather larger share of it than his brothers. And it is difficult to know how to attribute to any other cause the unquestionable fact that Jersey and Guernsey support without difficulty nearly three times the population per acre which the Isle of Wight supports. Even under the French law, excessive as is the morcellement it has produced, land fetches a

higher price and commands a higher rental than in England. And this is the case not only with peasant properties, but with what we should.

call small estates here, as any one may prove by taking up a provincial French paper and looking at the upset prices at which such estates are put up to auction.