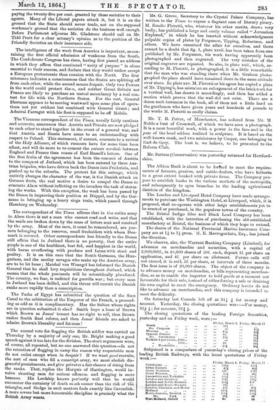 The Albion Bank is about to be forfiied to meet

the require- ments of farmers, graziers, and cattle-dealers, who have hitherto to a great extent banked with private firms. The Company pro- pose to establish banks in the various markets of the metropolis, and subsequently to open branches in the leading agricultural districts of the kingdom.

The London and Liverpool Hotel Company have made arrange- ments to purchase the Washington Hotel, at Liverpool, which, it is proposed, shall co-operate with other large establishments yet to be erected or purchased, in the populous towns of the country.

The Bristol Indigo Blue and Black Lead Company has been established, with the intention of purchasing the old-established manufactory at Bristol, the business of which they hope to extend.

The shares of the National Provincial Marine Insurance Com- pany are at 11 to lf prem. M. E. Mavrogordato, Esq., has joined the direction.

We observe, also, the Warrant Banking Company (Limited), for advances on merchandise and securities, with a capital of 2,000,0001., in 40,000 shares of 501. each, deposit lt. per share on application, and 41. per share on allotment. Future calls will not exceed, it is said, 5/. per share, at intervals of three months. The first issue is of 20,000 shares. The object of the company is to advance money on merchandise, or bills representing merchan- dise, so as to enable the importer to hold goods at a moment not favourable for their sale, instead of either forcing a sale or draining his own capital to meet the emergency. Ordinary banks do not like to advance on merchandise, and this company is intended to meet the difficulty.

Subjoined is a comparison of yesterday's closing prices of the leading British Railways, with the latest quotations of Friday week :—