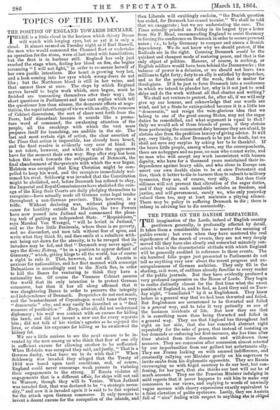 THE POSITION OF ENGLAND TOWARDS DENMARK.

We are a little curious to see the next excuse to be in- vented by the men among us who think that fear of one ally is sufficient excuse for allowing another to be suffocated. When Holstein was occupied they said, and justly, " That is a German duchy, what have we to do with that ?" When Schleswig was invaded they alleged that the Treaty of 1852 was based upon tacit conditions, and, of course, England could never encourage weak persons in 'violating their engagements to the strong. If Russia violates all engagements that is a different affair, for ships will not sail to Warsaw, though they will to Venice. When Jutland was invaded first, that was declared to be "a strategic neces- sity," and now it is invaded again it is said to be fair reprisal for the attack upon German commerce. It only remains to invent a decent excuse for the occupation of the islands, and then Liberals will exultingly exclaim, " the Danish question has ended, for Denmark has ceased to exist." We shall be told that we exaggerate ; but we are understating the case. The Times actually printed on Friday in its largest type a letter from Sir F. Head, recommending England to assist Germany in forcing the conference on Denmark in order to secure personal union ; i e., to help Germany to conquer and annex a Danish dependency. We do not know why we should protest, if the Radicals are in the right. Coercing Denmark would be the quickest and cheapest mode of restoring peace, and that is the only object of politics. Honour, of course, is nothing, or English soldiers would have been behind the Dannewerke ; the balance of power is a delusion, or we should not leave two millions to fight forty; duty to an ally is satisfied by despatches, and as for the protection of the weak, that is matter for theologians. If it be just to force Denmark into a conference in which we intend to plunder her, why is it not just to send ships and do the work without all that chatter and writing ? We shall not venture to protest, for, after all, if we will only give up our honour, and acknowledge that our words are wind, and let a State be extinguished because it is a little too " democratic," and resign the vain-glorious idea that we belong to one of the great among States, may not the sugar duties be remodelled, and what argument is equal to that ? Only we would ask of these friends of peace, if they abstain from performing the commonest duty because they are afraid, to abstain also from the profitless luxury of giving advice. It will pay, very likely, to allow Denmark to be put to death, but we shall not save any surplus by asking her to be thankful. If the brave little people, among whom, say the correspondents, there are no beggars and no poor, no man who cannot write, and no man who will accept any work inconsistent with human dignity, who have for a thousand years maintained their in- dependence against heavy odds, and who alone in Europe can assert our own double claim to be at once Protestant and free, think it better to die in harness than to submit to military tyrannies, they are, of course, very silly. But then their silliness will not prevent that alteration of the sugar duties, and if they value such unsaleable articles as freedom, and justice, and self-government, surely we, who only yesterday valued them too, may at least maintain a pitying silence. There may be policy in suffering Denmark to die ; there is infamy in advising her to die contentedly.