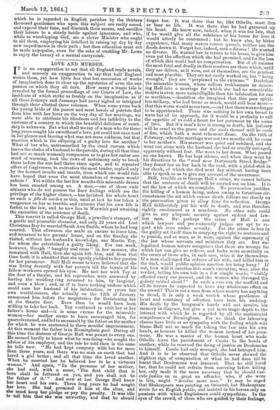 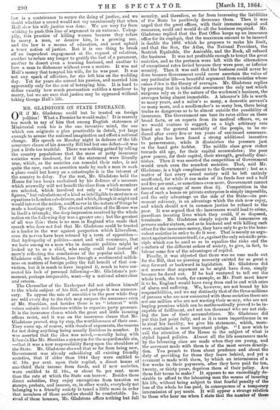 of imagination done to clear up the mysteries of even the one passion on which they all turn. How many a tragic tale is revealed by the formal proceedings of our Courts of Law, the incidents of which strike as freshly on the imagination as if all these Jemmys and Jessamys had never sighed or intrigued through their allotted three volumes. When some years back the young bride of the purest and most heroic of patriots fled from him with her lover on the very day of her marriage, we were able to attribute his blindness and her infidelity to the customs of a country to which the beautiful delirium of court- ship is unknown. But what shall we say of a man who for three long years sought his sweetheart's love, yet could not once read in her glance and bearing what was not mere coldness, but that aversion which is the offspring of a guilty love for another ? What of her who, untrammelled by the cruel custom which leaves the ohoice of a husband to the parents, during all that time had not so much womanly compassion as to give her suitor one word of warning, took the vows of matrimony only to break them before the sun had thrice risen again, and to repeated offers of forgiveness, to entreaties the most tender, replied only by the keenest insults and taunts, from which one would fain have hoped that even the most shameless of women would refrain ? Yet within the last few months this miserable drama has been enacted among us. A man,—one of those rude artisans who do not possess the finer feelings which are the privilege of the higher classes,—has lavished his whole heart on such a fine de marbre as this, until at last he has taken a vengeance on her so terrible and extreme that his own life is forfeit to the law, and he now lies in Warwick gaol awaiting the execution of the sentence of death.

This convict is called George Hall, a jeweller's stamper, of a gentle and peaceable character, and only 22 years old. Last Christmas Day he married Sarah Ann Smith, whom he had long courted. That afternoon she made an excuse to leave him, and returned to her parents' house, and on the Sunday she visited, without her husband's knowledge, one Martin Toy, for whom she entertained a guilty liking. For one week, however, though " haughty and cross " in her manner, she remained with Hall, then she again left him, and from that time forth it is admitted that she openly yielded to her passion for her paramour. Still Hall seems to have believed that she was living decently with her parents till the taunts of his fellow-workmen opened his eyes. He met her with Toy at the door of a theatre, and his reproaches were answered by having the wedding ring returned to him, by laughter, and even a blow ; and, as if to leave nothing undone which could cure her husband of his infatuation, or prove her own worthlessness, she actually on the 12th of January summoned him before the magistrates for threatening her at the theatre door. Even then he would have been willing to take her back. Toy continued to visit her at her father's house and—it is some excuse for the miserable woman—her mother seems to have encouraged him, for quarrels ensued, and led to an assault by the father on the mother for which he was sentenced to three months' imprisonment. At this moment the father is in Birmingham gaol. During all this time the distress of George Hall was patent to every one. He seemed hardly to know what he was doing—he sought the advice of his employer, and the tale he told then is the same he tells now. "He had kept company with her for more than three years, and there was no man on earth that had loved a girl better; and all that time she loved another. When he married her he believed her to be a virtuous woman." And again, "In the presence of her mother, she had said, with a sneer, The first child that is born shall be fathered on you, and you shall not be the father of it.'" And now at last George Hall knew her heart and his own. Three long years he had sought her love. She had promised it him at the altar, and she must keep her pledge or pay the penalty. It was idle to tell him that she was unworthy, and that he should

forget her. It was there that he, like Othello, must live or bear no life. It was there that he had garnered up his heart. He knew now, indeed, when it was too late, that if he would give all the substance of his house for love it would utterly be contemned ; but he knew also, by bitter experience, that many waters cannot quench, neither can the floods drown it. Forget her, indeed, seek a divorce ! He wanted no divorce. He wanted her to return to his house, to give him even yet the affection which she had promised, and for the loss of which this world had no compensation. But of all natures the most fatal and deadly in their resolves are those which, until they are driven, as it were, out of themselves, are the gentlest and most placable. They are not easily worked on, but " being wrought," they are " perplexed in the extreme." Doubtless the miserable woman, whose callous recklessness in deceiv- ing Hall into a marriage for which she had no conceivable motive is even more unintelligible than his infatuation for one so worthless, —doubtless she imagined that this poor spirit. less milksop, who had borne so much, would still bear more— that this worm would neverturn,—and that there was no danger to be apprehended. There was nothing in her own breast to warn her of its approach, for it would be a profanity to call the appetite of so cold a heart for her paramour by the name of love. But if a man's love is strong as death, his jealousy will be cruel as the grave and the coals thereof will be coals of fire, which hath a most vehement flame. On the 16th of February, whenthe marriage was not two months old, ho came to her mother's. His manner was quiet andsubdued, and she went out alone with the husband she had so cruelly outraged, apparently without fear. She went to her doom. What passed no one knows. He has kept silence, and when they went by his directions to the "road near Dartmouth Street Bridge" they found her on her back in the road, with a pistol-shot in her cheek, of which she died next day without having been able to speak so as to give any account of the occurrence. Still, terrible as is George Hall's crime, we cannot believe that the sentence of death will be carried out on him. It is not the law of which we complain. No provocation justifies the killing of a human being, unless owing to fortuitous cir- cumstances the act which causes death follows too closely on the provocation given to allow time for reflection. George Hall deliberately put his wife to death, and was therefore rightly condemned as a murderer. No other rule could give us any adequate security against violent and law- less men. But perhaps the crime of Hall is one which lawyers and pre-eminently judges are apt to re- gard with even undue severity. For the crime is less in the guilty act itself than in usurping the right to sentence and to punish, and so wars, as it were, against the supremacy of the law whose servants and ministers they are. But un- legalized human nature recognizes that there are wrongs for which law can give no redress, and looks more mercifully on the errors of those who, in such case, seize it for themselves. If a man challenged the seducer of his wife, and killed him in the duel, would public opinion sanction his being hung ? If not, how will it sanction this man's execution, who, after the verdict, telling his own tale in a few simple words, "visibly affected every one present, and the women who thronged the gallery sobbed aloud ?" In such a case can the scaffold and all its terrors be expected to have any wholesome effect on the crowd? This is not a man from whom society has anything to dread, it is only a weak wretch whose gentleness of heart and constancy of affection have been his undoing. His death by the hangman's hands will not involve his memory in disgrace, but give a yet more tragic depth to the interest with which he is regarded by all the sentimental sempstresses of Birmingham. For we think the labouring classes have little or no sympathy with the feeling which will blame Hall not so much for taking the law into his own hands, as because he killed the woman instead of her para- mour. He was a master of the human heart who made Othello leave the punishment of Cassio to the hands of another, while he reserved the doing of justice on Desdemona to himself. Cassio had only wronged, she had betrayed him. And it is to be observed that Othello never showed the slightest sign of compunction at what he had done till he learnt that Desdemona was innocent. That he still loved her, that he could not refrain from caressing before killing her, only made it the more necessary that he i should exe- cute justice on so great an offender, who, f she were to live, might " deceive more men." It may be urged that Shakespeare was painting an Oriental, but Shakespeare wrote for an English public, and insisted in his heroes only on passions with which Englishmen could sympathize. In. the eyes of the crowd, of those who are guided by their feelings,