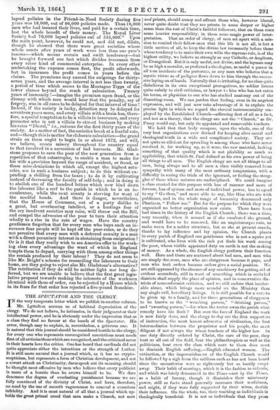 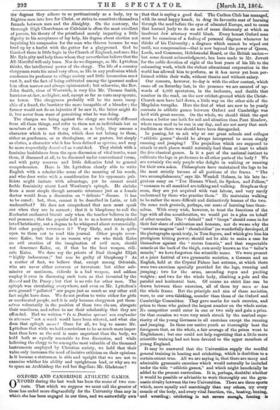 ME SPECTATOR AND THE CLERGY.

IN the very temperate letter which we publish in another column, Mr. Lyttelton accuses us of habitual depreciation of the clergy. We do not believe, he intimates, in their judgment or their intellectual power, and he is obviously under the impression that as a class they find no favour at the hands of the Spectator. His error, though easy to explain, is, nevertheless, a grievous one. It is natural that this journal should be considered hostile to the clergy, for every one who represents unrecognized convictions must needs first of all criticize those which are recognized, and the criticized never in their hearts love the critics. One has heard that cardinals did not quite appreciate either the intentions or the strength of Luther. It is still more natural that a journal which, as it has no crypto- scepticism, but represents a form of Christian development, and not a covert attack on Christianity, dares speak out its meaning, should be thought most offensive by men who believe that every publicist is more of a heretic than he avows himself to be. We dare denounce the dogma of everlasting punishment because we are fully convinced of the divinity of Christ, and have, therefore, no need by the use of smooth vagueneesse to conceal a conscious infidelity. And it is most natural of all that a journal which up- holds the great primal creed that men make a Church, not men and priests, should annoy and affront those who, however liberal, never quite doubt that they are priests in some deeper or higher sense than the rest of Christ's faithful followers, that on them rests some heavier responsibility, in them some magic power of inter- pretation. That an order of clergy, of men set apart with a mis, sion to remind their fellow-men that this life is not all, is but a little section of all, to keep the divine law incessantly before those whose tendency is to make their own wills the supreme rule, is of the highest utility, we believe as strongly as any Catholic, or Anglican, or Evangelical. But it is only useful, not divine, and the layman may be as high a moralist, as profound a theologian, as useful a pastor in all true incidents of the pastorate, as any man who believes that a mystic virtue as of pedigree flows down to him through the succes- sive laying on of hands. Naturally that is irritating, for no class quite disbelieves in its own exceptional prerogatives, no soldier listens quite calmly to civil criticism, or lawyer to him who has not eaten his terms, or physician to one who has studied anatomy out of the dissecting-room. We can pardon that feeling, even in its angriest expression, and will just now take advantage of it to explain the precise light in which we regard the clerical instrumentality em- ployed by the Established Church—affirming first of all as a fact, and not as a theory, that the clergy are not the " Church," as Dr. Pusey would say, but only its appointed and removeable teachers. the -dogmas they adhere- to- so pertinaciously as a body, try to frighten men into love for Christ, or strive to constitute themselves

funnels between men and the Almighty. On the contrary, the thorough High Churchman or Calvinist is often the most excellent of pastors, his theory of the priesthood merely imparting a little dignity to his acceptance of lay help, his dogma about election not impairing his compassion for the man who thieves because he was bred up by a harlot with the gutter for a playground. God be thanked there is little logic in the Church of England, and men like

Mr. Ryle pity and help those whom they nevertheless believe that the All-Merciful will only burn. Nor do we disparage, as Mr. Lyttelton thinks, the intellectual power of the clergy. The life of a country clergyman rusts his mind very often, as life in any profession which condemns its professor to village society and little locomotion must rust it, and the fact of being cultivated among the ignorant makes him often narrow and always opinionated ; but otherwise, the Rev. John Smith, vicar of Westwick, is very like Mr. Thomas Smith, barrister-at-law, no higher, and, except so far as caste may operate, no lower. The clergyman probably will be the more incap- able of a fraud, the barrister the more incapable of a blunder ; the former would not do an injustice if he saw it, the latter might do it, but never from want of perceiving what he was doing.

The charges we bring against the clergy are totally different from all these things, and refer to them not as individuals but as members of a caste. We say that, as a body, they assume a character which is not theirs, which does not belong to them, either as gentlemen, or as theologians, or as pastors, but simply as clerics, a character which has been defined as epicene, and may be more respectfully described as varnished. They shrink with M feminine bashfulness from the open discussion of vital truths, want them, if discussed at all, to be discuised under conventional terms, and with petty reserves and little delicacies fatal to general Comprehension. Here is Mr. Lyttelton clearly able to write English with a scholar-like sense of the meaning of his words, and who does write with a consideration for his opponents pub- licists might imitate with advantage, yet he cannot avoid feeble femininity about Lord Westbury's epitaph. He shrinks from a most simple though sarcastic utterance just as a female doctor would from a discussion on " delicate " disease. It has to be cured ; but, then, cannot it be described in Latin, or left undescribed ? He does not comprehend that men must speak out when they are in earnest ; that it is blasphemy to call the Eucharist enchanted biscuit only when the teacher believes in the real presence ; that the popular hell is to us a horror interpolated Into Christianity, not a dogma to be whispered about reverentially. But other people reverence it? Very likely, and it is quite open to them not to read this journal. Other people rever- ence Kalee, but that is no reason why we who think Kalee an evil creation of the imagination of evil men, should not denounce Kalee, or, if that be the best weapon, ridi- cule Kalee. We dare say the priests of Baal thought Elijah " highly indecorous ;" but was he guilty of blasphemy ? As a matter of fact, we believe that, except among Orientals, who are never either reverent or irreverent, but either sub- missive or mutinous, ridicule is a bad weapon, and seldom employ it even in discussing such tests as that invented by the Record and Dr. Pusey ; but that is no rule for other men. The epitaph was circulating everywhere, and even on Mr. Lyttelton's own ground " polluted " our pages just as much as any other evil fact might have done. We do not profess to write either for girls or uneducated people, and it is only because clergymen put them- selves voluntarily in the position of those two classes, abrogate their manliness, and refuse to use their scholarship that they are offended. Had we written "In to Domine speravi non confundar in teternum" not a word would have been uttered, and what else does that epitaph mean? Once for all, we beg to assure Mr. Lyttelton that while we hold convictions to be as much more impor- tant than laws as the soul is more important than the body, we hold both as equally amenable to free discussion, and while believing the clergy to be among the most valuable of the thousand instruments employed by Christian society, we hold that their value only increases the need of incisive criticism on their opinions. Is it because a statesman is able and upright that we are not to examine whither his ability and uprightness lead, or why are we to spare an Archbishop the rod but flagellate Mr. Gladstone?