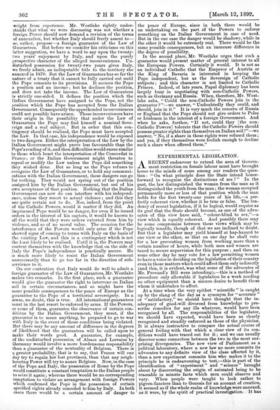 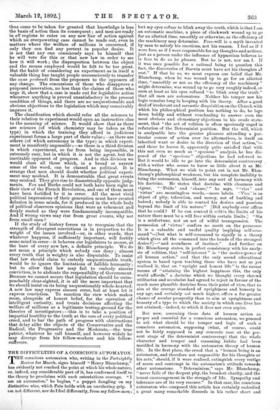 itRECENT endeavour to extend the area of Govern- ment restriction on female labour must have brought home to the minds of some among our readers the ques- tion: "On what principle does the State intend hence- forward to recognise the distinctions of sex ? " In the past, the law distinguished the woman from the man as it distinguished the youth from the man; the woman occupied permanently more or less of that position which the man holds for the first twenty-one years of his life,—a per- fectly coherent view, whether it be true or false. The ten- dency of recent legislation, if it be logical, would require as its goal that the State should become, as one of the advo- cates of this view have said, "colour-blind to sex,"—a view which is equally coherent. And possibly there may be some compromise between these views which may be logically tenable, though of that we are inclined to doubt. But that a legislator may yield himself at hap-hazard to one view or the other, so that on one day he shall vote for a law preventing women from working more than a certain number of hours, while both men and women are taxed to secure supervision for this purpose ; and then on some other day he may vote for a law permitting women to have a voice in deciding on the legislation of their country even in those matters which could affect them only indirectly (and this, it is evident, was what some of the advocates of Mr. Provand's Bill were intending),—this is a method of procedure only allowable if legislation be a work needing no other equipment than a sincere desire to benefit those whom it undertakes to affect.

At a time when the very epithet " scientific " is caught up by the slang of the day as a synonym for " accurate " or "satisfactory," we should have thought that the in- adequacy of good-will divorced from knowledge to pre- scribe remedies for any ills whatever, would have been recognised by all. The responsibilities of the legislator, we should have expected, would have been as clearly recognised and steadily enforced as those of the physician. It is always instructive to compare the actual course of general feeling with that which a clear view of its con- ditions would have traced out for it ; and we can usually discover some connection between the two in the most sur- prising divergencies. The new view of Parliament as a political laboratory, where a new law no more commits its advocates to any definite view of the class affected by it, than a new experiment commits him who makes it to the principle he is endeavouring to test,—this is part of the identification of " experiment " and " science " brought about by discovering the origin of animated being to be traceable in minute facts which men could observe and vary. When people were taught to look rather to pigeon-fanciers than to Genesis for an account of creation, it seemed as if the whole realm of knowledge were annexed, as it were, by the spirit of practical investigation. It has thus come to be taken for granted that knowledge is less the basis of action than its consequent ; and men are ready in all regions to enter on any new line of action against which an overpowering case cannot be made out, even in matters where the welfare of millions is concerned, if only they can find any pretext in popular desire. It is not that any one consciously says to himself that he will vote for this or that new law in order to see how it will work ; the disproportion between the object and the means employed would be felt to be too great. But the habit of considering an experiment as in itself a valuable thing has taught people unconsciously to transfer the onus probancli from the proposers to the opposers of any change. The concessions of those who disapprove a proposed innovation, no less than the claims of those who urge it, show that a case is made out for legislative action whenever anything is proved unsatisfactory in the present condition of things, and there are no unquestionable and obvious objections to the legislation which may conceivably improve it.

The classification which should refer all the sciences to their relation to experiment would open an instructive clue to the meaning of science. It would show that as there are sciences (of which chemistry may be taken as the type) in which the training they afford in judicious experiment forms a large part of their value ;—as there are others (of which astronomy is the type) in which experi- ment is manifestly impossible ;—so there is a third division in which experiment, so far from being impossible, is extremely easy, but in which it is not the agent, but the inevitable opponent of progress. And in this division we would class all those which, in a broad or narrow sense of the word, can be classed as political. It is strange that men should doubt whether political experi- ment may mislead. It is demonstrable that great events may mislead. They give rise to diametrically opposite judg- ments. Fox and Burke could not both have been right in their view of the French Revolution, and one of them must have been fortified by it in error. All the most vivid political impressions of their generation must have created delusion in some minds, for it produced in the whole body of political observers opinions that were as vehement and deeply rooted as they were fundamentally incompatible. And if wrong views may rise from great events, why not from small ones ?

If the study of history forces us to recognise that the strength of divergent convictions is in proportion to the weight of the issues involved—or, in other words, that whatever happens, if sufficiently important, will fortify some mind in error—it behoves our legislators to secure, at the base of every new law, a definite principle. We do not mean a principle which nobody can deny ; almost every truth that is weighty is also disputable. To insist that law should claim to embody unquestionable truth, would be to ignore the limitations of fallible humanity ; but to allow that law may fail to embody sincere conviction, is to abdicate the responsibility of Government. Because we cannot secure that legislation should be unim- peachably clear-sighted, it is all the more important that we should insist' on its being unquestionably whole-hearted. A new law may express sincere error, but at least let it express conviction. To sanction the view which makes room, alongside of honest belief, for the operation of intelligent curiosity, and treats decisions affecting the welfare of millions as a legitimate testing-ground for the theories of investigators ;—this is to take a position of impartial hostility to the truth at the core of every political creed, and to bar the path of progress with obstructions that delay alike the objects of the Conservative and the Radical, the Promssive and the Moderate,—the true patriot, whatever he call himself, and however widely he may diverge from his fellow-workers and his fellow- sufferers.