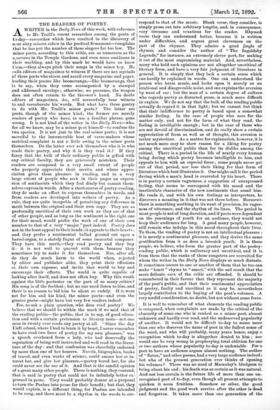 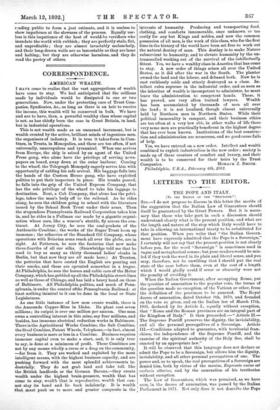 THE READERS OF POETRY.

AWRITER in the Daily News of this week, with reference to Mr. Trail's recent researches among the poets of to-day—researches which have resulted in the discovery of 0 Ter sixty minora siclera in the poetical firmament—complains that he has put the number of these singers far too low. The minor poets, according to this critic, are as numerous as the s2arrows in the Temple Gardens, and even more assiduous in their warbling, and by this mark he would have us know nem,—they always pitch their songs in the minor key. He calls editors of magazines to witness if there are not myriads of these poets who storm and assail every magazine and paper, hurling their poems like boomerangs,—like boomerangs, that h to say, when they come accompanied by a stamped and addressed envelope ; otherwise, we presume, the weapon does not often return to the thrower's hand. No doubt editors of magazines, &c., will sorrowfully bear witness to and corroborate his:words. But what have these gentry to do with Mr. Train's minor poets ? The latter are poets, though of the minor kind; the former are merely readers of poetry who have, to use a familiar phrase, gone wrong. It is not kind of the writer in the Daily News—who, for all we know, may be a minor poet himself—to confuse the two species. It is not just to the real minor poets ; it is not merciful to the innumerable host of verse-makers whose metrical complaint is not a little owing to the minor poets themselves. Do the latter ever ask themselves who it is who reads their poetry, and why it is they read it ? If they fancy that the bulk of their ordinary public is gifted with any critical faculty, they are grievously mistaken. Their readers are composed to a very small extent of people who properly appreciate their merits, and whose appre- ciation gives them pleasure in reading, and to a very large extent of people who seek in their pages an expres- sion of sentiments which they feel dimly but cannot them- selves express in words. After a short course of poetry-reading, they do make an effort to express themselves in words, and from readers are developed into writers of poetry. As a rule, they are quite incapable of perceiving any difference in merit between the original and their own copy. They are as profoundly uncritical of their own work as they are of that of other people, and as long as the sentiment is the right one for their mood, would prefer the work of one of their own number to that of a very "major "poet indeed. Poetry does not in the least appeal to their heads ; it appeals to their hearts; and they prefer a sentimental ballad ground out upon a barrel-organ, to a stately fugue of some immortal composer. They have this merit,—they read poetry and they buy it : it is not well to quarrel with them because they sometimes try to make it for themselves. Nor, after all, do they do much harm to the world when, rejected by editor and publisher alike, they print their effusions at their own expense, and invite that world to buy and encourage their efforts. The world is quite capable of looking after itself, and does not often buy. Why this wrath against the little poetaster on the part of so many critics ? His song is of the feeblest ; but no one need listen to him, and there is no reason to bid him be silent so rudely. If it were not for him and his kind, the minor poets—and even the greater poets—might have but very few readers indeed.

For, to ask a plain question, who does read poetry ? We believe that we should be within the mark if we said that- of the reading public—the public, that is to say, of good educa- tion and with a certain pretension to literary taste—not one man in twenty ever reads any poetry at all. "Since the day I left school, where I had to learn it by heart, I never remember to have read two lines of poetry for my own pleasure," was a speech overheard from a lady, who had deservedly the reputation of being well instructed and well read in the litera- ture of the day : and that confession was cheerfully endorsed by more than one of her bearers. Novels, biographies, books of travel, and even works of science, could amuse her or in- terest her, and give her pleasure,—poetry bored her, for she could never see the use of it. And that is the candid opinion of a great many other people. There is nothing, they contend, that is said in poetry that could not be infinitely better ex- pressed in prose. They would probably demur at a proposal to turn the Psalms into prose for their benefit; but that, they would explain, is a different thing, for Psalms are intended to be sung, and there must be a_rbythm in the words to cor- respond to that of the music. Blank verse, they consider, is simply prose cut into arbitrary lengths, and, in consequence, very tiresome and vexatious for the reader. Rhymed verse they can understand better, because it is written under difficulties, and argues great cleverness on the part of the rhymer. They admire a good jingle of rhymes, and consider the author of "The Ingoldsby Legends," for instance, an extremely clever poet, for making- it out of the most unpromising material. And, nevertheless,. many who hold such opinions are not altogether uncritical of literary form, and have a very fair judgment of literature in. general. It is simply that they lack a certain sense which can hardly be explained in words. One can understand the person who hates music, and looks upon it merely as an irrational and disagreeable noise, and one explains the aversion by want of ear ; but the man of a certain degree of culture- who regards poetry as distorted prose, is much more difficult to explain. We do not say that the bulk of the reading public- actually do regard it in that light; but we cannot but think that their indifference to poetry is based upon a somewhat similar feeling. In the case of people who care for the matter only, and not for the form of what they read, the- feeling is intelligible enough ; but in the case of those who- are not devoid of discrimination, and do really show a certain appreciation of form as well as of thought, this aversion is rather mysterious. As a matter for explanation, however, it is. not much more easy to show reason for a liking for poetry among the uncritical public than for its dislike among the- critical. There is a period in the life of nearly every human being during which poetry becomes intelligible to him, and appeals to him with an especial force ; some people never get out of that period, nor lose their liking for that form of literature which best illustrates it. One might call it the period during which a man's head is overruled by his heart. There is in poetry a certain vagueness, a suggestion of unexpressed feeling, that seems to correspond with his mood and the- inarticulate character of the new sentiments that assail him. He reads it, and with his own feelings as interpreters, he discovers a meaning in it that was not there before. Moreover,- there is something soothing in its want of precision, its vague- ness of utterance, and the rhythm of its lines. The period in most people is not of long duration, and if poets were dependent on the yearnings of youth for an audience, they would not keep their audiences for long. A good many people, however, still remain who indulge in this mood throughout their lives_ To them, the reading of poetry is not an intellectual pleasure it is merely a sentimental pleasure, and they derive the same gratification from it as does a lovesick youth. It is these people, we believe, who form the greater part of the poetry- reading public, which is unliterary and uncritical, and it is- from them that the ranks of those songsters are recruited for- whom the writer in the Daily News displays so much distaste. It sometimes occurs to one or another of them that he too can make " heart " rhyme to "smart," with the sad result that the more delicate ears of the critic are offended. It should be- remembered in their favour that they represent the majority of the poet's public, and that their sentimental appreciation of poetry, faulty and uncritical as it may be, nevertheless- largely contributes to the buying of the poet's volumes. A very sordid consideration, no doubt, but not without some force.

It is well to remember of what elements the reading public- is composed, when complaints are made by the critical of the obscurity of some one who is ranked as a minor poet, almost unknown and hardly ever read, and the undeserved popularity of another. It would not be difficult to-day to name more than one who deserves the name of poet in the fullest sense of the word, and who will probably, many years hence, enjoy a. recognition which to-day is altogether denied to him ; nor- would one be very wrong in prophesying total oblivion for one or two authors whose popularity to-day is undeniable. For a poet to have an audience argues almost nothing. The author of "Satan," and other poems, had a very large audience indeed; but who of the present generation ever thinks of opening his volumes ? There was no need of Macaulay's bludgeon to. bring about his end ; his death was as certain as it was natural. And not less certain is the future life of more than one un- recognised poet of to-day, even though all present attempts to. quicken it seem fruitless. Somehow or other, the good judgment and the good work survive after the other is dead and forgotten. It takes more than one generation of the r.mcling public to form a just estimate, and it is useless to show impatience at the slowness of the process. Equally use- less is this impatience of the host of would-be versifiers who . inundate the world with rubbish; they are perfectly stale, flat, and unprofitable ; they are almost invariably melancholy, and their long-drawn wails are as lamentable as they are lame and halting; but they are otherwise harmless, and they do read the poetry of others.