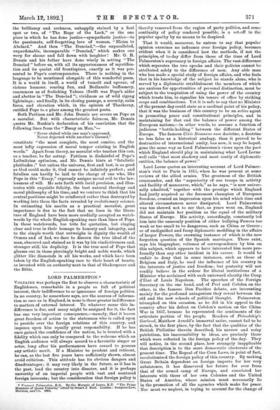 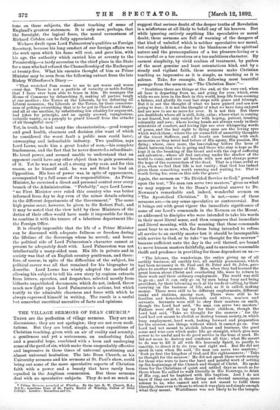 VOLTAIRE was perhaps the first to observe a characteristic of Englishmen. remarkable in a people so full of 'political interest, their indifference to or ignorance of foreign politics. In no country, he somewhere says, are the sources of informa- tion so rare as in England, in none is there greater indifference to matters of external interest. To whatever cause this in- difference is due, and many might be assigned for it, the fact has one very important consequence,—namely, that it leaves great freedom of action to the statesman who is called upon to preside over the foreign relations of this country, and imposes upon him equally great responsibility. If he has once gained the confidence of the nation, he is trusted with a fidelity which can only be compared to the welcome which an English audience will always accord to a favourite singer or actor, long after his performances have ceased to possess any artistic merit. If a Minister be prudent and reticent, he can, as the last five years have sufficiently shown, almost avoid criticism. This attitude has its obvious dangers and disadvantages ; it may very likely in the future, as it has in the past, lead the country into disaster, and it is perhaps unworthy of an imperial people with vast and scattered foreign interests; but the consideration that foreign policy is • Viscount Palmerston, K.G. By the Marquis of Lorne, K.T. "The Prime Ministers of Queen Victoria," edited by Stuart J. Reid. London : Sampson Low, .Marston, and CO. 1892.

thereby removed from the region of party politics, and some continuity of policy rendered possible, is a set-off to the popular apathy by no means to be despised.

That it would, moreover, be untrue to say that popular opinion exercises no influence over foreign policy, becomes. evident when it is considered how the methods, if not the principles, of to-day differ from those of the time of Lord Palmerston's supremacy in foreign affairs. The vast difference which separates the two epochs and their policies cannot be attributed solely to the difference of men. Any able man who has made a special study of foreign affairs, and who feels that in his knowledge of the subject he stands alone, who is served by a, diplomatic establishment the members of which are anxious for opportunities of personal distinction, must be subject to the temptation of using the power of the country which trusts him, to signalise his tenure of office by striking coups and combinations. Yet it is safe to say that no Minister- of the present day could state as a cardinal point of his policy, that it was the business of this country to be an active agent in promoting peace and constitutional principles, and in maintaining for that end the balance of power among the European nations,—in other words, to assume a function of judicious " bottle-holding " between the different States of Europe. The famous Civis Romanus sum doctrine, a doctrine no less false as a historical analogy, than it proved to be destructive of international amity, has now, it may be hoped,. gone the same way as Lord Palmerston's views upon the part which England should play in maintaining what Lord Lorne well calls "that most shadowy and most costly of diplomatic entities, the balance of power."

Lord Lorne quotes an interesting account of Lord Palmer- ston's visit to Paris in 1815, when he was present at some reviews of the allied armies. The greatness of the British commander, and the "superiority of our troops in activity and facility of mancenvre, which," as he says, "is now univer- sally admitted," together with the prestige which England had justly acquired as the foremost champion of European freedom, created an impression upon his mind which time and altered circumstances never dissipated. Lord Palmerston was too shrewd not to see that, as years went on, England did not maintain her position as the equal of the military States of Europe. His activity, accordingly, constantly led him into the unseemly position of either bullying Powers too weak or too small to be dangerous, such as China or Greece ; or of undignified and fussy diplomatic meddling in the affairs of larger Powers, the crowning instance of which is the now forgotten question of the Spanish marriages. There exist, says his biographer, volumes of correspondence by him on this subject, which appears to have interested him more pro. foundly than any other incident in his career. It would be unfair to deny that in some instances, such as those of Belgium and Italy, he used the influence of his country in the interests of justice and freedom ; but posterity will not readily believe in the ardour for liberal institutions of a Minister who acclaimed with such untoward alacrity the Coup d'Btat of Louis Napoleon. The speeches of the Foreign Secretary on the one hand, and of Peel and Cobden on the other, in the famous Don Pacifico debate, are interesting mainly for the profound antagonism they reveal between the old and the new schools of political thought. Palmerston triumphed on this occasion, as he did in his appeal to the country after his defeat on Cobden's motion on the China War in 1857, because he represented the sentiments of the articulate portion of the people. Readers of Friendship's Garland, Matthew Arnold's immortal satire, cannot fail to be struck, in the first place, by the fact that the qualities of the British Philistine therein described, his narrow and noisy patriotism, his inaccessibility to ideas, are precisely those which were reflected in the foreign policy of the day. They will notice, in the second place, how strangely inapplicable that description is to the more democratic electorate of the present time. The Repeal of the Corn Laws, in point of fact, revcdutionised the foreign policy of this country. By making Great Britain dependent on foreign imports for her very subsistence, it has dissevered her future for ever from that of the armed camp of Europe, and associated her interests with those of her own Colonies and the United States of America, whose mission must necessarily lie in the promotion of all the agencies which make for peace. Nor must we neglect, in trying to account for the change of tone on these subjects, the direct teaching of some of England's greatest statesmen. It is only now, perhaps, that the foresight, the logical force, the moral earnestness of

Richard Cobden can be fully appreciated.

We have dwelt upon Lord Palmerston's qualities as Foreign Secretary, because his long conduct of our foreign affairs was the work upon which his fame will rest, and gave him, with his age, the authority which carried him at seventy to the Premiership,—a tardy accession to the chief place in the State for a man who had refused the Chancellorship of the Exchequer

at twenty-five. What his enemies thought of him as Prime Minister may be seen from the following extract from the late Bishop Wilberforce's Diary :—

" That wretched Pam seems to me to get worse and worse every day. There is not a particle of veracity or noble feeling that I have ever been able to trace in him. He manages the House of Commons by debauching it, making all parties laugh at one another ; the Tories at the Liberals, by his defeating all Liberal measures ; the Liberals at the Tories, by their conscious- ness of getting everything that is to be got in Church and State ; and all at one another, by substituting low ribaldry for argunisnt, bad jokes for principle, and an openly avowed, vainglorious, imbecile vanity, as a panoply to guard himself from the attacks of all thoughtful men !"

Yet, in truth, he had many fine characteristics,—good temper and good health, clearness and decision (the want of which

he considered the worst fault a public man could have), unwearying and indomitable industry. Two qualities, says Lord Lorne, made him a great leader of men,—his complete fearlessness, and the fact that he never deserted a subordinate. He loved power, and seemed unable to understand that an opponent could have any other object than to gain possession of it. Yet he was not at all a strong party man, and for this reason, as he himself said, he was not fitted to lead an Opposition. His love of power was, in spite of appearances,

accompanied by a full sense of its responsibilities. As Prime Minister, he exercised a direct and personal control over every branch of the Administration. "Probably," says Lord Lorne,

"no First Minister ever ruled this country who was better informed from day to day even of the minor details relating to the different departments of the Government." The same high praise must, however, be given to Sir Robert Peel ; and it may be noted that the view held by these Ministers of the duties of their office would have made it impossible for them to combine it with the tenure of a laborious department like the Foreign Office.

It is clearly impossible that the life of a Prime Minister can be discussed with adequate fullness or freedom during the lifetime of the Sovereign whom he served; and hence the political side of Lord Palmerston's character cannot at present be adequately dealt with. Lord Palmerston was not intellectually a many-sided man. His life in private and in society was that of an English country gentleman, and there- fore, of course, in spite of the difficulties of the subject, his political career was all that remained for his biographer to describe. Lord Lorne has wisely adopted the method of allowing his subject to tell his own story by copious extracts from letters, speeches, and despatches, selected mostly from hitherto unpublished documents, which do not, indeed, throw much new light upon Lord Palmerston's actions, but which testify to the admirable clearness and force with which he always expressed himself in writing. The result is a useful but somewhat uncritical narrative of facts and opinions.