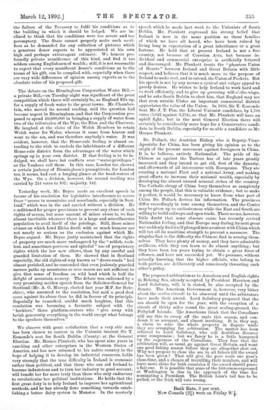 Page 3, 12 March 1892 — We observe with great satisfaction that a very able man
Close

We observe with great satisfaction that a very able man

has been chosen to contest in the Unionist interest Sir T. Esmonde's seat for South Dublin (County) at the General Election. Mr. Horace Plunkett, who has spent nine years in ranching and other enterprises in the Western States of America, and has now returned to his native country in the hope of helping it to develop its industrial resources, holds very strongly that the true difficulty in Ireland is economic rather than political, and that those who can aid Ireland to become industrious and to turn her industry to good account, will benefit her far more truly than those who only endeavour to revolutionise her political institutions. He holds that the first great duty is to help Ireland to improve her agricultural methods, and he has already done something towards estab- lishing a better dairy system in Munster, Intile masterly

speech which he made last week to the Unionists of South Dublin, Mr. Plunkett expressed his strong belief that Ireland is now in the same position as those families of which we have all heard, who have been ruined by living long in expectation of a great inheritance or a great fortune. He held that at present Ireland is not a free country, not because of Coercion Acts, but because in- dividual and commercial enterprise is artificially fettered and discouraged. Mr. Plunkett treats the "phantom Union of Hearts" between Ireland and Great Britain with little respect, and believes that it is much more to the purpose of Ireland to make real, and to extend, the Union of Pockets. But his speech is not by any means a cynical and vulgar appeal to greedy desires. He wishes to help Ireland to work hard and to work efficiently, and to give up -pursuing will-o'-the-wisps, and he asks South Dublin to elect him, that England may see that even outside Ulster an important commercial district appreciates the value of the Union. In 1886, Sir T. Esmonde beat Mr. J. T. Pim, the Liberal Unionist candidate, by 1,768 votes (5,022 against 3,254), so that Mr. Plunkett will have an uphill fight ; but in the next General Election there will certainly be considerably more hope for a Conservative candi- date in South Dublin, especially for so able a candidate as Mr. Horace Plunkett.