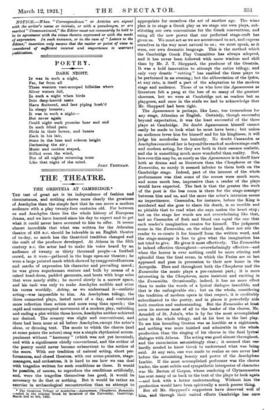 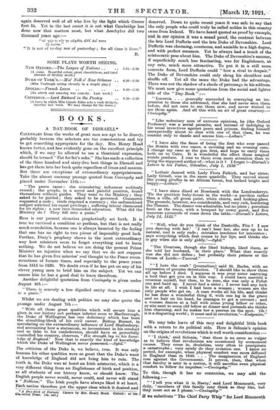 THE ORESTEIA AT CAMBRIDGE.*

Tax test of great art is its independence of fashion and circumstance, and nothing shows more clearly the greatness of Aeschylus than the simple fact that he can move a modern audience with a play twenty-four centuries old. For between us and Aeschylus there lies the whole history of European drama, and we have learned since his day to expect and to get what it could never have occurred to him to offer. It seems almost incredible that what was written for the Athenian theatre of 458 B.C. should be tolerable in an English theatre of to-day, so much has the theatrical tradition changed and the craft of the producer developed. At Athens in the fifth century B.c. the actor had to make his voice heard by an audience of twenty or thirty thousand people—a football crowd, as it were—gathered in the huge open-air theatre ; he wore a large painted mask which showed by exaggeratedfeatures and marks of expression his character and prevailing mood ; he was given superhuman stature and bulk by means of a raised head-dress, padded garments, and boots with huge soles that were nearly stilts ; he moved slowly in a narrow space, and his task was only to make Aeschylus audible and utter his verses worthily. Acting, as we understand it—realistic acting—was impossible to him. An Aeschylean trilogy, the three connected plays, lasted most of a day, and contained more reflection than action and more song than speech ; the rapid and uninterrupted movement of a modern play, unfolding and ending a plot within three hours, Aeschylus neither achieved nor desired. The scenery was slight and conventional, and there had been none at all before Aeschylus, except the actor's slant, or dressing tent. The music to which the chorus (and at some points the actors) sang was a simple rhythmical accom- paniment without " harmony " (which was not yet invented), and with a significance chiefly conventional, and the author of the poetry could never become subservient to the author of the score. With our tradition of natural acting, short per. formancee, and closed theatres, with our scene-painters, stage. managers, and orchestras, it is hard to see how we can deal with tragedies written for suoh conditions as these. It would be possible, of course, to reproduce the conditions artificially, and, were the tragedies themselves less good, it would be necessary to do that or nothing. But it would be rather an exercise in archaeological reconstruction than an attempt to • The Oresteian Trilogy of Aeschylus—Agamemnon. Choephoroe, Eumenides —acted In the original Greek by members of the University. Cambridge, March 2nd to 9th, 1921. appropriate for ourselves the art of another age. The wiser plan is to stage a Greek play as we stage our own plays, sub-

stituting our own conventions for the Greek conventions, and using all the new power that our perfected stage-craft has

given us. We must act as we are accustomed to act, and express ourselves in the way most natural to us ; we must speak, as it were, our own dramatic language. This is the method which the Cambridge Greek Play Committee has always adopted, and it has never been followed with more wisdom and skill

than by Mr. J. T. Sheppard, the producer of the Oresteia. It was a bold innovation to attempt the entire trilogy, and only very drastic " cutting " has enabled the three plays to be performed in an evening ; but the abbreviation of the lyrics, at any rate, is itself a part of the adaptation to the modern stage and audience. Those of us who love the Agamemnon as literature felt a pang at the loss of so many of the greatest choruses, but we were at Cambridge not as readers but as playgoers, and once in the stalls we had to acknowledge that Mr. Sheppard had been right.

The Agamemnon is perhaps, like Lear, too tremendous for any stage, Athenian or English. Certainly, though successful beyond expectation, it was the least successful of the three

plays at Cambridge. No doubt Agamemnon himself cannot easily be made to look what he must have been ; but unless an audience loves him for himself and for his kingliness, it will judge his murderess too leniently. No doubt Cassandra as Aeschylus conceived her is beyond the reach of modem stage-oraft and modern acting, for they are both in their essence realistic,

and she is something much more wonderful than reality. But, however this may be, as surely as the Agamemnon is in itself finer both as drama and as literature than the Choephoroe or the Eumenides, so surely it seemed inferior to them both on the Cambridge stage. Indeed, part of the interest of the whole

performance was that some of the scenes were much more, and some much lees, impressive than a reader of the plays would have expected. The fact is that the greater the work of the poet is the less room is there for the stage-manager between him and us, and the more the actor's intrusion seems an impertinence. Cassandra, for instance, before the King is murdered and she goes to share his death, is so terrible and so pitiable that to read what she says makes the heart stop; but on the stage her words are not overwhelming like that, and no Cassandra of flesh and blood can equal the one that

each reader's imagination creates for himself. The judgment scene in the Eumenides, on the other band, does not stir the

reader to re-create it for himself from the written word, and

the stage-manager is free to give what the imagination has not tried to give. He gives it most effectively. The Eumenides

is indeed effective throughout—overwhelmingly effective—and when the horror is over nothing could be more stirring and splendid than the final scene, in which the Furies are at last appeased and pass in procession to their new home in the

Acropolis. Here and throughout both the Choephoroe and the Eumenides the music plays a pre-eminent part ; it is more interesting in the Choephoroe, more insistent and exciting in the Eumenides. Occasionally, indeed, it has no more effect than to make the words of a lyrical dialogue inaudible, and that is the unforgivable sin ; but on the whole, considering the tradition of modern opera in that respect, it is creditably subordinated to the poetry, and in places it powerfully aids both emotion and understanding. But the Eumenides at least owes its success most of all to the leader of the chorus, Mr. Arundell of St. John's, who is by far the most accomplished actor in the whole trilogy, and at his best in the last play. To see him hounding Orestes was as horrible as a nightmare, and nothing was more finished and admirable in the whole production than the singing of his chorus in the final lyrical dialogue with Athena. The acting was good almost throughout, and the enunciation astonishingly clear ; it seemed that one hardly needed to know Greek to understand what was being said. At any rate, one was made to realize as one never had before the astonishing beauty and power of the Aeschylean Iambic. If the most accomplished performer was the chorus

leader, the most subtle and sympathetic interpreter of character was Mr. Barton of Corpus, whose rendering of Clytaemnestra has sent many of us back to the text of the plays to look again —and look with a better understanding. Without him the production would have been spiritually a much poorer thing. But all Mr. Sheppard's supporters have deserved well of him, and through their united efforts Cambridge has once again deserved well of all who live by the light which Greece first lit. Yet in the last resort it is not what Cambridge has done now that matters most, but what Aeschylus did two

"It is not of to-day nor of yesterday ; for all time it lives."