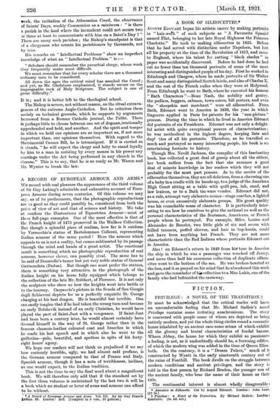 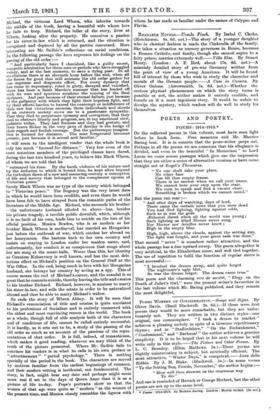 PRIVILEGE: A NOVEL OF THE TRANSITION.t IT must be acknowledged that the critical reader will have an uncomfortable feeling that Mr. Michael Sadleir's novel Privilege contains some irritating anachronisms. The story is concerned with people some of whom are depicted as being entirely modern, and yet the whole thing circles round a romantic house inhabited by an ancient race some scions of which exhibit all the gloomy and brutal characteristics of feudal barons. Whern Abbey, the house for which they exhibit so passionate a feeling, is not, as it undoubtedly should be, a frowning edifice, of which the modern wing was added in the time of Queen Eliza- beth. On the contrary, it is a " Dream Palace," much of it constructed by Wyatt in the early nineteenth century out of the ruins of Fonthill. The book dwells on the struggle between modern conditions and ancient privileges, and the story is told in the first person by Richard Braden, the younger son of the ancient family, who bear the name of their house as their title.

Aflame', the virtuous Lord Whom, who inherits towards the middle of the book, having a beautiful wife whose love he fails to keep. Richard, the teller of the story, lives at Whern, looking after the property. He conceives a passion for his sister-in-law which is returned, and the situation is recognized and deplored by all the parties concerned. More interesting are Mr. Sadleir's reflections on social conditions. In the following passage the hero expresses his feelings on the passing of the old order :-

" And particularly have I cherished, like a guilty secret, romantic admiration for those men or periods who have struggled vainly, and at the last moment, to save a dying past. In all revolutions there is an eleventh hour before the end, when all the forces for good that still animate the old order gather for one supreme and desperate effort. For every dynasty that has come to supremacy, ruled in glory, decayed and vanished, there has been a Saint Martin's summer that has fended off with its wan and spurious sunshine the coming of the final darkness. And just because of their eternal failure, just because of the gallantry with which they fight their hopeless fight, and by their efforts harden to hatred the contempt or indifference of their raw but victorious enemies, these individuals and shreds of an outworn society move me to a passionate sympathy. That they died to perpetuate tyranny and corruption, that they died to obstruct liberty and progress, are, in my emotional view, pedantic trifles. They had fineness and they had gesture, and their brave flicker in the very jaws of destiny is the badge of their superb and foolish courage. But the picturesque imagina- tion is focused for distance. The near foreground becomes prosaic, just because it is actual and familiar."

It will seem to the intelligent reader that the whole book is only too much " focused for distance." Very few even of the most notorious members of the privileged classes have dared,

during the last two hundred years, to behave like Black Whern, of whom we are told that he

" outstayed his time. By the harsh violence of his nature and by the seclusion to which it bound him, he kept alive beyond the turbulent dawn of a new and menacing century a conception of life and society that belonged to the complacent egoism of Victorian peace."

Surely Black Whern was no type of the society which belonged to " Victorian peace." The Regency was the very latest date

in which he would have been credible, and even there he would have been felt to have strayed from the romantic paths of the literature of the Middle Age. Michael, who succeeds his brother —the unfortunate husband alluded to above—has, besides his private tragedy, a terrible public downfall, which, although it is no fault of his own, leads him to suicide on the loss of his official position. Monica Braden, who is as modern as her brother Black Whern is mediaeval, has married an Hungarian just before the outbreak of war, which catches her abroad on her honeymoon. She hastens back to her own country and insists on staying in London under her maiden name, and, unfortunately, her conduct is so conspicuous that songs about her are sung at the music-halls. Worse than this, her identity as Countess Koloszvary is well known, and has the most dele- terious effect on Michael's position on the General Staff at the War Office. In the end, being much in love with her Hungarian husband, she betrays her country by acting as a spy. This of course means the end of Michael's .career, and the scandal is so great that he commits suicide, thereby leaving the title and estates to his brother Richard. Richard, however, is anxious to marry his sister-in-law, and sells the estate in order to be naturalized abroad and thus be able to marry Michael's widow.

So ends the story of Whern Abbey. It will be seen that Richard's renunciation of title and estates is quite unrelated to his professions of Socialism and is entirely connected with the oldest and most convincing reason in the world. The book as a whole, though full of able analysis both of the characters and of conditions of life, cannot be called entirely successful.

It is hardly, as it sets out to be, a study of the passing of the old order so much as an account of the passions of the repre-

sentatives of that order. It is full, indeed, of romanticism, which makes it good reading, whatever we may think of the

truth of the picture presented. Where Mr. Sadleir fails to Convince his readers is in what he calls in his own preface or " advertisement " " period psychology." There is nothing specially of the period in the book. The characters are moved

by motives familiar from the earliest beginnings of romance,

and their modern setting is incidental, not fundamental. The Story, in fact, might bear any date and perhaps might seem more real if set in the days of Queen Anne than it is as a Picture of life to-day. Pope's portraits show us that the women of that age were quite as " modern " as the women of the present time, and Monica closely resembles the figures with

whom lie his made us familiar under the names of CalypeO and Flavia.