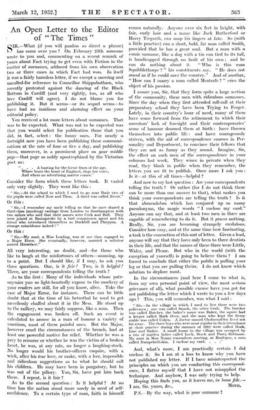 What (if you will pardon so direct a phrase) has come over you ? On February 25th someone wrote to you and, commenting on a recent remark of yours about Fact trying to get even with Fiction in the matter of surnames, adduced from his own observation two or three cases in which Fact had won. In itself it was a fairly harmless letter, if we except a sneering and uncalled-for reference to Councillor Shippobotham, who recently protested against the dancing of the Black Bottom in Cardiff (and very rightly, too, as all who love Cardiff will agree). I do not blame you for publishing it. But it seems—or its sequel seems—to have had an insidious and alarming effect on. - your editorial policy:

You received a lot more letters about surnames. That was to be expected: What was not to be expected was that you would select for publication those that you did, in fact, select : the funny ones. For nearly a fortnight now you have been publishing these communi- cations at the rate of four or five a day, and publishing them, moreover, in a prominent • place on your middle page—that page so nobly apostrophized by the Victorian poet as : . •`. . . A.husting for the {'treat Ones of the age,

Where beats the heart of England, sings her voice, And where) no advertising matter comes."

Consider the form which these letters took. It varied only very slightly. They went like this :

" Sir,—At the school to which I used to go near Buds two of the pupils were called Now and Then. A third was called Never."

" Sir, —I remember my uncle telling ns that he once shared a third-class (smoking) carriage from London to Southampton with two sailors who said that their names were Cock and Bull. They were joined at Basingstoke by a turf commission agent and his friend who introduced themselves as Duckbill and Platypus. A strange coincidence indeed !"

" Sir,—My aunt, a Miss Leading, was at one time engaged to a Major Error. She eventually, however, married a solicitor named Horseface."

All very interesting, no doubt, and—for those who like to laugh at the misfortunes of others—amusing, up to a point.- But I. should like, if I may, to ask you three questions. One, is it fair ? Two, is it helpful ? Three, are your correspondents telling the truth ?

As to the first : Many of the individuals whose patr- onymics you so light-heartedly expose to the mockery of your readers are still, for all you know, alive. Take the case of Major Error, for instance. There can be little doubt that at the time of his betrothal he used to get mercilessly_ chaffed about it in the Mess. He stood up to the raillery, we may fairly suppose, like a man. Then the engagement was broken off. Such an event is calculated to arouse in a man of honour a variety of emotions, most of them painful ones. But the Major, however .cruel the circumstances of the breach, had at least one powerful motive for relief. Whether lie was a prey to remorse or whether he was the victim of a broken heart, he was, at any rate, no longer a laughing-stock. No longer would his brother-officers enquire, with a wink, after his true love, or make, with a leer, impossible and ridiculous suggestions as to what he should call his children. He may have been in purgatory, but he was out of the pillory. You, Sir, have put him back there. I repeat, is it fair ?

As to the second question : Is it helpful ? At no time has the nation stood more sorely in need of self- confidence. To a certain type of man, faith in himself

comes naturally. - Anyone over six feet in height, with fair, curly hair and a name like Jack Rutherford or Harry Tregarth, can snap his fingers at fate. So (with a little practice) can a short, bald, fat man called Smith, provided that he has a great soul. But a man with a comic surname, like a dog with a tin can tied to its tail, is handicapped through no fault of his own ; and he can do nothing about it. " Who is this man Squibblethorpe ? " his constituents say. " He does not sound as if he could save the country." And of another, " How can I marry a man called Meatsafc ? " cries the object of his passion.

I assure you, Sir, that they form quite a large section of the community, these men with ridiculous surnames. Since the day when they first attended roll-call at their preparatory school they have been Trying to Forget. Lately, in their country's hour of need, many of them have come forWard from the retirement to which their ancestors' lack of foresight and their contemporaries' sense of humour doomed them at birth : have thrown themselves into public life : and have courageously striven, with the aid of correspondence courses in Per- sonality and Deportment, to convince their fellows that they are not as funny as they sound. Imagine, Sir, the effect on such men of the correspondence in your columns last week. They wince in private when they read, they blush in public when they remember, the letters you see fit to publish. Once more I ask you : Is it—at this of all time's—helpful ?

. And now to my last question : Arc your correspondents telling the truth ? Or rather (for I do not think there can be more than one answer to that), what makes you think your correspondents are telling the truth ? Is it that abracadabra which has conjured up so many pseudonyms, the magic words " I enclose my card." Anyone can say that, and at least two men in three are capable of remembering to do it. But it proves nothing. Really, Sir, you are becoming strangely credulous. Consider how easy, and at the same time how fascinating, a task is the concoction of this sort of letter. Given a lead, anyone will say that they have only been to three dentists in their life, and that the names of these three were Little, Wider, and Please. But who in the world (with the exception of yourself) is going to believe them ? I am forced to conclude that either the public is pulling your leg or that you are, pulling theirs. I do not know which solution to deplore most.

In the circumstances (and here I come to what is, from my own personal point of view, the most serious grievance of all), -what possible excuse have you got for not publishing the letter which I wrote to you a few days ago ? This, sou will remember, was what I said : " Sir,—In the village in which I used to live there were two policemen ; one was called Smash, the other Grab. The butcher was called Butcher, the baker's name was Baker, the squire had a keeper- called Mark Over, and the man who kept the livery stable was called Cohen. A doctor named Chohnondeley lived not far away. The three boys who were most regular in their attendance at choir practice during the summer of l902. were called look, Line and Sinker. A small house in the village was occupied by a trio of maiden ladies called Lock, Stock and Pusey-Robinson. My aunt (a Miss Noun) remembers meeting, at Boulogne, a man called Rumpelstiltskin. I enclose my card. . . ."

And, what's more, am practically certain I did enclose it: So I am at a loss to know why you have not published my letter. If I have misinterpreted the principles on which you are conducting this correspond- ence, I flatter myself that I have not misapplied the technique. And anyhow, I was only trying to help.