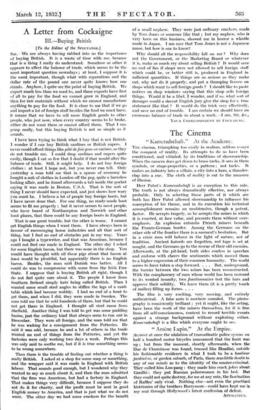 " Kameradschaft." At the Academy.

TILE cinema, triumphing too easily in realism, seldom essays the conquest of reality. Its attempts to do so have been conditioned, and vitiated, by its traditions of showmanship. When the camera does get down to brass tacks, it sees in them symbols, or stage-properties, or a pattern ; not tacks. It makes an industry into a villain, a city into a hero, a thunder- clap into a cue. The cloth of reality is cut to the measure of illusion.

Herr Pabst's Kameradsehaft is an exception to this rule. The truth is not always dramatically effective, nor always probable. Only in selecting those parts of it which are both has Herr Pabst allowed showmanship to influence his conception of his theme, and in its execution his technical accomplishment remains an unobtrusive, though a potent. factor. He accepts tragedy, as he accepts the mines in which it is enacted, at face value, and presents them without over- emphasis. An explosion entombs French miners beneath the Franeo-German border. Among the Germans on the other side of the frontier there is a moment's hesitation. But in a crisis men will behave in the light of nature, not of tradition. Ancient hatreds are forgotten, red tape is set at nought, and the Germans go to the rescue of their old enemies. Afterwards, at the pit-head, both sides confess in speeches and endorse with cheers the sentiments which moved them to a higher expression of their common humanity. The world seems to have taken a step forward. . . . But, underground, the barrier between the two mines has been reconstructed. With the complacency of men whose world has been restored to its wonted insanity, two fonctionnaires test the bars and approve their solidity. We leave them (it is a pretty touch of malice) filling up forms. . . .

The film is very exciting, very moving, and entirely untheatrical. A false note is nowhere sounded. The photo- graphy is consistently brilliant ; vet it might, like the acting, have been the work of the miners themselves, for it is free from all self-consciousness, content to record terrible events against a strange background without exploiting either. Kaiueradschaft is a film which everyone ought to see.