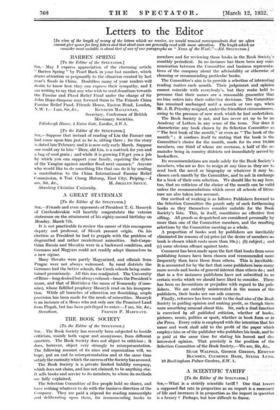 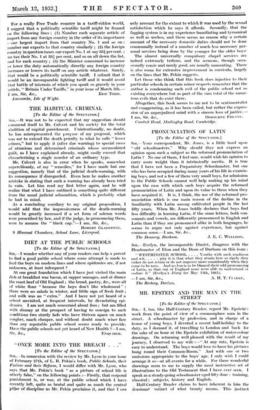 [To the Editor of the SPECTATOR.] Sin,—What is a strictly_ scientific tariff ? One that lowers a supposed flat rate in proportion as an import is a necessary of life and increases it in.proportion AS the import in questio,n is a luxury ? Perhaps, but how difficult to frame. For a really Free Trade country in a tariff-ridden world, I suggest that a politically scientific tariff might be framed on the following lines : (1) Number each separate article of import from any foreign country. in the order of its importance —our largest import from that country No. 1 and so on : number our exports to that country similarly ; (2) the foreign country in question taxes our export No. 1 at say 331 per cent. ; we tax their No. 1 at 331 per cent, and so on all down the list, and for each country ; (3) the Minister concerned to increase or lower the. duty automatically directly any foreign country increases or lowers its tariff on any article whatever. Surely, that would be a politically scientific tariff. I submit that it would be 'an incomparable fighting tariff and it would avoid that battle of interests of which you speak so gravely in your article, " Britain Under Tariffs," in your issue of March 5th.—