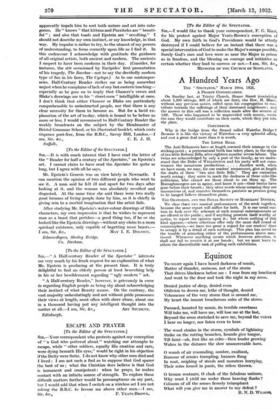 [To the Editor of the SPECTATOR.] SITC,—It is with much

Mr. Epstein's Genesis was on view lately in Newcastle. I can mention the opinion of two different people who went to see it. A man said he felt ill and upset for two days after looking at it, and the woman was absolutely revolted and disgusted. At the same time she said there were two really good bronzes of living people done by him, so it is chiefly in giving rein to a morbid imagination that the artist fails.

After studying Mr. Epstein's water-colour drawings of Bible characters, my own impression is that he wishes to represent man as a beast that perishes—a good thing too, if he or she looked like the Epstein drawings—without any claim to a more spiritual existence, only capable of begetting more beasts.—