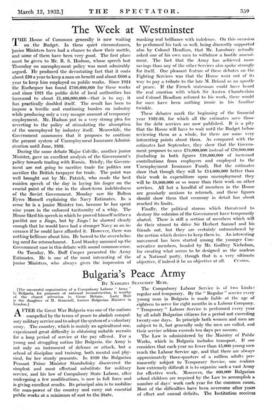 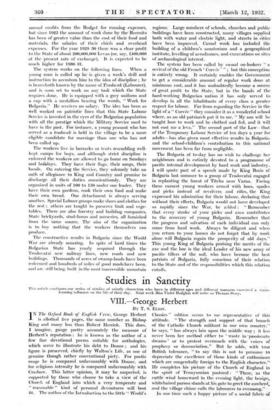 [The successful organization of a Compulsory Labour " Army" in Bulgaria, for purposes of national reconstruction, is worthy of the closest attention in Great Britain. Lady Muir is the daughter of M. Standoff, former Bulgarian Minister in London.] AFTER the Great War Bulgaria was one of the nations • compelled by the terms of peace to abolish compul- sory military service and to adopt the system of a voluntary army. The country, which is mainly an agricultural one, experienced great difficulty in obtaining suitable recruits for a long period of service at the pay offered. For a young and struggling nation like Bulgaria. the Army is not only an instrument of defence or attack, but a school of discipline and training, both mental and phy- sical, for her sturdy peasants. In 1920 the Bulgarian Peasant Prime Minister Stambolisky discovered the simplest and most effectual substitute for military service; and his law of Compulsory State Labour, after undergoing a few modifications, is now in full force and is giving excellent results. Its principal aim is to'mobilize the man-power of the country and carry out essential public works at a minimum of cost to the State. The Compulsory Labour Service is of two kinds regular and temporary. By the " Regular." service every young man in Bulgaria is made liable at the age of eighteen to serve for eight months in a Labour Company. " Temporary " Labour Service is performed every year by all adult Bulgarian citizens for a period not exceeding twenty-one days. In principle both women and men arc subject to it, but generally only the men are called, and their service seldom exceeds ten days per annum.

The Law is administered by the Ministry of Public Works, which in Bulgaria includes transport. If one considers that each year no fewer than 45,000 young men reach the Labour Service age, and that there are always approximately three-quarters of a million adults per- manently subject to Temporary Service, one realizes how extremely difficult it is to organize such a vast Army for effective work. Moreover, the 800,000 Bulgarian school children are required by the Law to accomplish a number of days' work each year for the common cause. Most of the difficulties have been overcome after years of effort and annual deficits. The Institution receive annual credits from the Budget .for running . expenseS, but since 1925 the amount of work done by the Recruits has been of greater value than the cost of their food-and materials, the salaries of their chiefs and overhead expenses. For the year 1929-30 there was a clear profit to the State of about 200,000,000 Levas (or, say, £400,000 at the present rate of exchange). It is expected to be much higher for 1980-31.

The system works on the following lines. When a young man is called up he is given a week's drill and instruction to accustom him to the idea of discipline ; he is henceforth known by the name of Trudovak (Labourer), and is soon set to work on any task which the State requires done. lie is equipped with a grey uniform and a rap with a medallion bearing the words, " Work for Bulgaria." He receives no salary. The idea has been so well worked on patriotic lines that this State Labour Service is invested in the eyes of the Bulgarian population with all the prestige which the Military Service used to have in the past. For instance, a young peasant who has served as a frudovak is held in the village to be a more eligible candidate for marriage than one who has not been called up.

The workers live in barracks or tents resembling well- kept camps for boys, and although strict discipline is enforced the workers arc allowed to go home on Sundays and holidays. They have their flags, their songs, their hands. On entering the Service, they solemnly take au oath of allegiance to King and Country and promise to discharge all their duties conscientiously. They are organized in units of 100 to 150 under one leader. They have their own gardens, cook their own food and make their own bread. One detachment is always serving another. Special Labour groups make shoes and clothes for the rest ; others are taught to preserve fruit and vege- tables. There arc also forestry and building companies, State brickyards, stud-farms and nurseries, all furnished from the same source. The aim of the organization is to buy nothing that the workers themselves can produce.

The constructive results in Bulgaria since the World War are already amazing. In spite of hard times the Bulgarian State has yearly acquired through the Trudovatzi new railway lines, new roads and new buildings. Thousands of acres of swamp-lands have been redeemed and hundreds of miles of good roads have been, and arc still being, built in the most inaccessible mountain

regions: Large numbers of schools, churches and public buildings have been -constructed, many villages supplied both with water and electric light, and streets in cities have been improved. Casual work has included the building of a children's sanatorium and a geographical institute, levelling of aerodromes, and excavations on sites of archaeological interest.

The system has been called by casual on-lookers " revival of the old French Cory& ' " ; but this conception is entirely wrong. It certainly enables the Government to get a considerable amount of regular work done at minimum cost, and it has undoubtedly become- a source of great profit to the State, but in the hands of the hard-working Bulgarian nation it has only served to develop in all the inhabitants of every class a greater respect for labour. Far from regarding the Service in the light of a " Corvde " they consider it as a wonderful school where, as an old patriarch put it tome, " My son will be taught how to work and be clothed and fed, and it will not cost me a les-a." The second part of the Law—that. of the Temporary Labour Service of ten days a year for adults—has also given most effective results iu Bulgaria; and the school-children's contribution to this national movement has been far from negligible.

The Bulgaria of to-day has no wish to challenge- her neighbours and is entirely devoted to a programme of pacific internal development by hard work and industry. I will quote part of, a speech made by King Boris of Bulgaria last summer to a group of Trudovatzi engaged in replanting the forest of Titcha near Varna. Facing these earnest young workers armed with hoes, spades and picks instead of revolvers and rifles, the King expressed his admiration for their labour, declaring that without their efforts, Bulgaria would not have developed so rapidly since the War, he added : "Remember that every stroke of your picks and axes contributes to the recovery of young Bulgaria. Remember that the progress and salvation of each individual can only conic from hard work. Always be diligent and when you return to your homes do not forget that by work alone will Bulgaria regain the prosperity of old days." This young King of Bulgaria praising the merits of the axe -and the hoe is the ideal Leader of his new army of pacific tillers of the soil, who have become the best patriots of Bulgaria, fully conscious of their relation to the State and of the responsibilities which this relation entails.