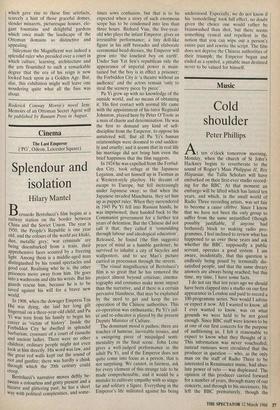 Bernardo Bertolucci's film begins at a railway station on the border between China and the Soviet Union. The year is 1950, the People's Republic is one year old, and the colours of the world are khaki, dun, metallic grey; 'war criminals' are being disembarked from a train, their apprehensive faces scoured by a freezing light. Among them is a middle-aged man distinguished by his round spectacles and good coat. Realising whci he is, the other prisoners move away from him. He goes into a washroom and slits his wrists. But his guards rescue him, because he is to be saved against his will for a brave new world.

In 1908, when the dowager Empress Tzu Hsi was dying, she laid her long gilt fingernail on a three-year-old child; and Pu Yi was torn from his family to begin his career as 'victim of history'. Inside the Forbidden City he dwelled in splendid barbarism, cynosure of a court of eunuchs and ancient ladies. There were no other children; ordinary people might not even look at him directly. His word was law, and the great red walls kept out the sound of riot and gunfire; there was hardly a chink through which the 20th century could creep. Bertolucci's narrative moves deftly be- tween a colourless and gritty present and a bizarre and glittering past; he has a short way with political complexities, and some- times sows confusion, but that is to be expected when a story of such enormous scope has to be condensed into less than three hours. Richard Vuu, the five-year- old who plays the infant Emperor, gives an irresistible performance; a tiny doll-like figure in his stiff brocades and elaborate ceremonial head-dresses, the Emperor will giow into 'the loneliest boy on earth'.

Under Sun Yat Sen's republican rule the appearance of imperial power is main- tained but the boy is in effect a prisoner; the Forbidden City is 'a theatre without an audience' and the actors remain 'only to steal the scenery piece by piece'.

Pu Yi grew up with no knowledge of the outside world, and no means of obtaining it. His first contact with normal life came with the appointment of his tutor Reginald Johnston, played here by Peter O'Toole as a man of charm and determination. He was the first to demand any kind of self- discipline from the Emperor, to oppose his untutored will. But all Pu Yi's human relationships were doomed to end sudden- ly and cruelly; and it seems that in real life his marriage did not bring him even the brief happiness that the film suggests.

In 1924 he was expelled from the Forbid- den City, took refuge at the Japanese Legation, and set himself up in Tientsin as a Western-style playboy. He dreamt of escape to Europe, but fell increasingly under Japanese sway; so that when the Japanese invaded 'Manchuria, they set him up as puppet ruler. When they surrendered in 1945 Pu Yi fell into Russian hands; he was imprisoned, then handed back to the Communist government for a further ten years of detention. But the Chinese did not call it that; they called it 'remoulding through labour and ideological education'.

Released, he found (the film suggests) peace of mind as a humble gardener; he survived to inhabit a city of bicycles and wallposters, and to see Mao's picture carried in procession through the streets.

The visual magnificence of Bertolucci's film is so great that he has removed the project almost beyond criticism; cinema- tography and costumes make more impact than the narrative, and if there is a certain pervasive blandness, that may be explained by the need to get and keep the co- operation of the Chinese authorities. This co-operation was enthusiastic; Pu Yi's jail- er and re-educator is played by the present Deputy Minister of Culture.

The dominant mood is pathos; there are touches of humour, inevitable ironies, and a swingeing piece of misjudged senti- mentality in the final scene. John Lone gives a well-judged performance as the adult Pu Yi, and if the Emperor does not quite come into focus as a person, that is not surprising. We cannot, in fairness, ask for every element of this strange tale to be made comprehensible, and it would be a mistake to cultivate empathy with so singu- lar and solitary a figure. Everything in the Emperor's life militated against his being understood. Especially, we do not know if his 'remodelling' took full effect, no doubt given the choice one would rather be brainwashed than shot, but there seems something cynical and repellent in the notion that you can wipe out a person's entire past and rewrite the script. The film does not deprive the Chinese authorities of their triumph; the Emperor began and ended as a symbol, a pitiable man destined never to be valued for himself.