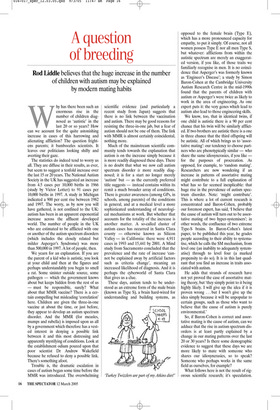 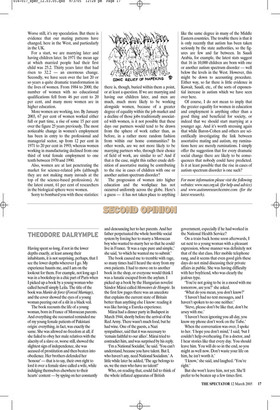 A question of breeding

Rod Liddle believes that the huge increase in the number of children with autism may be explained by modern mating habits Why has there been such an enormous rise in the number of children diagnosed as ‘autistic’ in the last 20 or so years? How can we account for the quite astonishing increase in cases of this harrowing and alienating affliction? The question frightens parents; it bamboozles scientists. It leaves our politicians looking shifty and averting their gaze.

The statistics do indeed tend to worry us all. They are diffuse in their results, as ever, but seem to suggest a tenfold increase over the last 15 or 20 years. The National Autism Society in the UK has suggested an increase from 4.5 cases per 10,000 births in 1966 (study by Victor Lotter) to 91 cases per 10,000 births in 1997. A study in Michigan indicated a 900 per cent rise between 1982 and 1997. The worry, as by now you will have gathered, is not confined to the UK: autism has been in an apparent exponential increase across the affluent developed world. The number of people in the UK who are estimated to be afflicted with one or another of the autism spectrum disorders (which includes the closely related but milder Asperger’s Syndrome) was more than 500,000 in 1997. A lot of people, then.

We yearn for an explanation. If you are the parent of a kid who is autistic, you look at your child and then at the figures and perhaps understandably you begin to smell a rat. Some sinister outside source, some pathogen — which the government knows about but keeps hidden from the rest of us — must be responsible, surely? What about that MMR vaccine? There is a certain compelling but misleading ‘correlation’ here. Children are given the three-in-one vaccine at about the time, or just before, they appear to develop an autism spectrum disorder. And the MMR (for measles, mumps and rubella) is imposed upon us all by a government which therefore has a vested interest in denying a possible link between it and this most distressing and apparently mystifying of conditions. Look at the establishment odium poured upon that poor scientist Dr Andrew Wakefield because he refused to deny a possible link. There’s something afoot.

Trouble is, the dramatic escalation in cases of autism began some time before the MMR was introduced. The overwhelming scientific evidence (and particularly a recent study from Japan) suggests that there is no link between the vaccination and autism. There may be good reasons for resisting the three-in-one jab, but a fear of autism should not be one of them. The link with MMR is almost certainly coincidental, nothing more.

Much of the mainstream scientific community tends towards the explanation that autism is on the increase simply because it is more readily diagnosed these days. There is no doubt that what we now call autism spectrum disorder is more readily diagnosed; it is for a start no longer merely ‘autism’ but — as the currently preferred title suggests — instead contains within its remit a much broader array of conditions. There is greater awareness (among GPs, in schools, among parents) of the conditions in general, and at a medical level a more sophisticated understanding of neurological mechanisms at work. But whether that accounts for the totality of the increase is another matter. A so-called cluster of autism cases has occurred in Santa Clara county — otherwise known as Silicon Valley — in California: there were 4,911 cases in 1993 and 15,441 by 2001. A Mind study from Sacramento concluded that the prevalence and the rate of increase ‘cannot be explained away by artificial factors such as criteria change’, meaning an increased likelihood of diagnosis. And it is perhaps the cyberworld of Santa Clara that gives us a clue.

These days, autism tends to be understood as an extreme form of the male brain (known as Type S), a brain hard-wired for understanding and building systems, as opposed to the female brain (Type E), which has a more pronounced capacity for empathy, to put it simply. Of course, not all women possess Type E nor all men Type S, but whatever: afflictions from within the autistic spectrum are merely an exaggerated version, if you like, of those traits we familiarly recognise in men. It is no coincidence that Asperger’s was formerly known as ‘Engineer’s Disease’; a study by Simon Baron-Cohen at the Cambridge University Autism Research Centre in the mid-1990s found that the parents of children with autism or Asperger’s were twice as likely to work in the area of engineering. As one expert puts it: the very genes which lead to autism also lead to those engineering skills.

We know, too, that in identical twins, if one child is autistic there is a 90 per cent chance that his twin will be similarly afflicted. If two brothers are autistic there is a one in three chance that the third offspring will be autistic. All of which brings us to ‘assortative mating’: our tendency to choose partners who are phenotypically similar — who share the same idiosyncrasies, if you like for the purposes of procreation. As opposed, for example, to ‘random mating’. Researchers are now wondering if an increase in patterns of assortative mating might contribute to a full explanation of what has so far seemed inexplicable: that huge rise in the prevalence of autism spectrum disorder. Note: ‘might contribute’. This is where a lot of current research is concentrated and Baron-Cohen, probably our foremost expert, has said, ‘I believe that the cause of autism will turn out to be assortative mating of two hyper-systemisers’; in other words, the confluence of two extreme Type-S brains. In Baron-Cohen’s latest paper, to be published this year, he grades people according to their ability to systematise, which he calls the SM mechanism, from level one (an inability to adequately systematise) through to level four (a marked propensity to do so). It is in this last quadrant that you find an increase in traits associated with autism.

He adds that strands of research have not yet proved the case of assortative mating theory, but ‘they simply point to it being highly likely. I will give up the idea if it is proven wrong ... but I won’t give up the idea simply because it will be unpopular to certain groups, such as those who want to believe that the cause of autism is purely environmental.’ So, if Baron-Cohen is correct and assortative mating is the cause of autism, can we adduce that the rise in autism spectrum disorders is at least partly explained by a change in our mating patterns over the last 20 or 30 years? Is there some demographic evidence to suggest that these days we are more likely to mate with someone who shares our idiosyncrasies, so to speak? Someone who perhaps works in the same field as ourselves, for example?

What follows here is not the result of rigorous scientific research; it’s speculation. Worse still, it’s my speculation. But there is evidence that our mating patterns have changed, here in the West, and particularly in the UK.

For a start, we are marrying later and having children later. In 1971 the mean age at which married people had their first child was 25.2. Thirty years later that had risen to 32.2 — an enormous change. Secondly, we have seen over the last 20 or so years a quite dramatic transformation in the lives of women. From 1984 to 2000, the number of women with no educational qualifications fell from 46 per cent to 20 per cent, and many more women are in higher education.

More women are working, too. By January 2003, 67 per cent of women worked either full or part time, a rise of some 15 per cent over the figure 25 years previously. The most noticeable change in women’s employment has been in entry to the professional and managerial sector, up from 12 per cent in 1971 to 20 per cent in 1993; whereas women working in manufacturing declined from one third of total female employment to one tenth between 1970 and 1990.

Also, women are at last penetrating the market for science-related jobs (although they are not making many inroads at the top of the science-based professions). At the latest count, 61 per cent of researchers in the biological sphere were women.

Sorry to bombard you with these statistics: there is, though, buried within them a point, or at least a question. If we are marrying and having our children later, and men are much, much more likely to be working alongside women, because of a greater degree of equality within the job market and a decline of those jobs traditionally associated with women, is it not possible that these days our partners would tend to be drawn from the sphere of work rather than, as before, in a rather more random fashion from within our home communities? In other words, are we not more likely to be marrying partners who, through their choice of field of work, are similar to us? And if that is the case, might this rather crude definition of assortative mating be contributing to the rise in cases of children with one or another autism spectrum disorder?

The progression of women into higher education and the workplace has not occurred uniformly across the globe. Here’s a guess — it has not taken place to anything like the same degree in many of the Middle Eastern countries. The trouble there is that it is only recently that autism has been taken seriously by the state authorities, so the figures are few and far between. In Saudi Arabia, for example, the latest stats suggest that 16 in 10,000 children are born with one or another autism spectrum disorder — well below the levels in the West. However, this might be down to accounting procedure. Either way, so far there is little evidence in Kuwait, Saudi, etc., of the sorts of exponential increase in autism which we have seen over here.

Of course, I do not mean to imply that the greater equality for women in education and employment is anything other than a good thing and beneficial for society, or indeed that we should start marrying at a younger age. And it’s worth stressing again that while Baron-Cohen and others are scientifically investigating the link between assortative mating and autism, my ruminations here are merely ruminations. I simply offer the suggestion that for every dramatic social change there are likely to be consequences that nobody could have predicted. Is it at least possible that the rise in cases of autism spectrum disorder is one such?

For more information please visit the following websites: www.nas.org.uk (for help and advice) and www.autismresearchcentre.com (for the latest research).