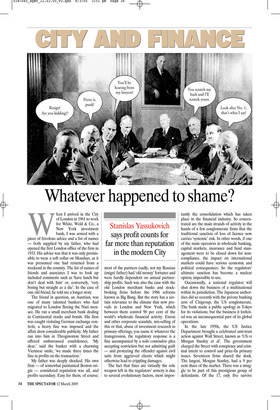 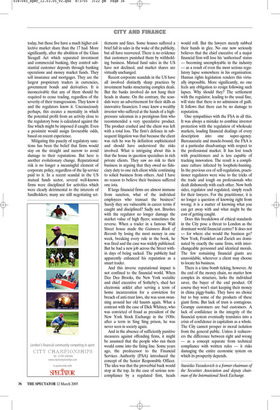 Whatever happened to shame?

When I arrived in the City of London in 1961 to work for White, Weld & Co., a New York investment bank, I was armed with a piece of frivolous advice and a list of names — both supplied by my father, who had opened the first London office of the firm in 1933. His advice was that it was only permissible to wear a soft collar on Mondays, as it was presumed one had returned from a weekend in the country. The list of names of friends and associates I was to look up included comments such as ‘have lunch but don’t deal with him’ or, conversely, ‘very boring but straight as a die’. In the case of one old friend, he told me a longer story.

The friend in question, an Austrian, was one of many talented bankers who had migrated to London fleeing the Nazi menace. He ran a small merchant bank dealing in Continental stocks and bonds. His firm was caught violating German exchange controls; a heavy fine was imposed and the affair drew considerable publicity. My father ran into him in Throgmorton Street and offered embarrassed condolences. ‘My dear,’ said the banker with a charming Viennese smile, ‘we made three times the fine in profits on the transaction.’ My father was deeply shocked. His own firm — of somewhat puritanical Boston origin — considered reputation was all, and profits secondary. Easy for them, of course; most of the partners (sadly, not my Russian émigré father) had ‘old money’ fortunes and were hardly dependent on annual partnership profits. Such was also the case with the old London merchant banks and stockbroking firms before the 1986 reforms known as Big Bang. But the story has a certain relevance to the climate that now prevails in London and New York, which between them control 90 per cent of the world’s wholesale financial activity. Enron and other corporate scandals, mis-selling of this or that, abuse of investment research in primary offerings, you name it: whatever the transgression, the regulatory response is a fine accompanied by a nolo contendere plea accepting conviction but not admitting guilt — and protecting the offender against civil suits from aggrieved clients which might otherwise lead to crippling damages.

The fact that fines are virtually the sole weapon left in the regulators’ armory is due to several evolutionary factors, most impor tantly the consolidation which has taken place in the financial industry. So concentrated are the main strands of activity in the hands of a few conglomerate firms that the traditional sanction of loss of licence now carries ‘systemic’ risk. In other words, if one of the main operators in wholesale banking, capital markets, insurance and fund management were to be closed down for noncompliance, the impact on international markets could have serious economic and political consequences. So the regulators’ ultimate sanction has become a nuclear option, impossible to use.

Occasionally, a national regulator will shut down the business of a multinational within its jurisdiction. The Japanese authorities did so recently with the private banking arm of Citigroup, the US conglomerate. The bank made a public apology in Tokyo for its violations; but the business it forfeited was an inconsequential part of its global operations.

In the late 1950s, the US Justice Department brought a celebrated anti-trust action against Wall Street, known as ‘US vs Morgan Stanley et al’. The government charged the Street with conspiracy and criminal intent to control and price-fix primary issues. Seventeen firms shared the dock. The largest, Morgan Stanley, had a 9 per cent share of the market. There was a struggle to be part of this prestigious group of defendants. Of the 17, only five survive today, but those five have a much higher collective market share than the 17 had. More significantly, after the abolition of the Glass Steagall Act which separated investment and commercial banking, they control substantial customer deposits through banking operations and money market funds. They sell insurance and mortgages. They are the largest proprietary traders in currencies, government bonds and derivatives. It is inconceivable that any of them should be required to cease trading, regardless of the severity of their transgressions. They know it and the regulators know it. Unconsciously perhaps, this creates a mentality in which the potential profit from an activity close to the regulatory bone is calculated against the fine which might be imposed if caught. Even a pessimist would assign favourable odds, based on recent experience.

Mitigating this paucity of regulatory sanctions has been the belief that firms would stay on the straight and narrow to avoid damage to their reputations. But here is another evolutionary change. Reputational risk is no longer a meaningful element of corporate policy, regardless of the lip service paid to it. In a recent scandal in the US mutual funds sector, several well-known firms were disciplined for activities which were clearly detrimental to the interests of fundholders; many are still negotiating set tlements and fines. Some houses suffered a brief fall in sales in the wake of the publicity, but all have recovered. There is no evidence that customers punished them by withholding business. Mutual fund sales in the US have not declined, and market shares are virtually unchanged.

Recent corporate scandals in the US have all involved distinctly sharp practices by investment banks structuring complex deals. But the banks involved do not hang their heads in shame. On the contrary, the scandals were an advertisement for their skills as innovative financiers. I once knew a wealthy investor who suffered at the hands of a highpressure salesman in a prestigious firm who recommended a very speculative product. The product crashed and the client was left with a total loss. The firm’s defence in subsequent litigation was that because the client was rich he was by definition sophisticated and should have understood the risks involved. What is intriguing about this is that the house in question specialises in rich private clients. They saw no risk to their business in arguing that they owed no fiduciary duty to one rich client while continuing to solicit business from others. And I have no reason to believe their business suffered one iota.

If large financial firms are almost immune from sanction, what of the individual employees who transact the business? Surely they are vulnerable in career terms if caught and disciplined? Sadly not. Brushes with the regulator no longer damage the market value of high flyers; sometimes the reverse. When a trader in a famous Wall Street house made the Guinness Book of Records by losing the most money in one week, breaking every rule in the book, he was fired and the case was widely publicised. But he had a new job across the Street within days of being sacked. The publicity had apparently enhanced his reputation as a smart trader.

And this inverse reputational impact is not confined to the financial world. When Dee Dee Brooks, the New York socialite and chief executive of Sotheby’s, shed her electronic anklet after serving a term of home incarceration for a conviction for breach of anti-trust laws, she was soon swanning around her old haunts again. What a contrast with the case of Dick Whitney, who was convicted of fraud as president of the New York Stock Exchange in the 1930s: after a term in Sing Sing prison, he was never seen in society again.

And in the absence of sufficiently punitive measures against offending firms, it might be assumed that the people who run them would come into the firing line. Some years ago, the predecessor to the Financial Services Authority (FSA) introduced the concept of the Senior Responsible Officer. The idea was that the proverbial buck would stop at the top. In the case of serious noncompliance by a regulated firm, heads would roll. But the lawyers merely rubbed their hands in glee. No one now seriously believes that the chief executive of a major financial firm will lose his ‘authorised’ status — becoming unemployable in the industry — as a result of even the most serious regulatory lapse somewhere in his organisation. Human rights legislation renders this virtually impossible. More significantly, no one feels any obligation to resign following such lapses. Why should they? The settlement with the regulator, leading to the usual fine, will state that there is no admission of guilt. It follows that there can be no damage to reputation.

One sympathises with the FSA in all this. It was always a mistake to combine investor protection with the regulation of wholesale markets, loading financial dealings of every description into one super-agency. Bureaucratic and muscle-bound, the FSA is at a particular disadvantage with respect to the professional market. It has lost touch with practitioners and is less capable of tracking innovation. The result is a compliance culture infected by loophole-hunting. In the previous era of self-regulation, practitioner regulators were wise to the tricks of the trade and tough on professionals who dealt dishonestly with each other. Now both sides, regulator and regulated, simply reach for their lawyers. For the practitioner, it is no longer a question of knowing right from wrong; it is a matter of knowing what you can get away with and what might be the cost of getting caught.

Does this breakdown of ethical standards in the City pose a threat to London as the dominant world financial centre? It does not — for where else would the business go? New York, Frankfurt and Zurich are dominated by exactly the same firms, with interchangeable personnel and identical morals. The few remaining financial giants are unavoidable, wherever a client may choose to locate his business.

There is a time bomb ticking, however. At the end of the money chain, no matter how complex its structure, lurks the individual saver, the buyer of the end product. Of course they won’t start keeping their money in china piggy-banks. They have no choice but to buy some of the products of these giant firms. But lack of trust is contagious. Grumpy customers are bad customers. A lack of confidence in the integrity of the financial system eventually translates into a crisis of confidence in capitalism as a whole. The City cannot prosper in moral isolation from the general public. Unless it rediscovers the difference between right and wrong — as a concept separate from technical compliance with written rules — it risks damaging the entire economic system on which its prosperity depends.