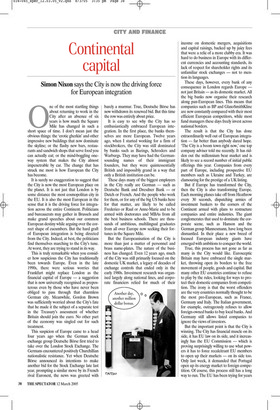 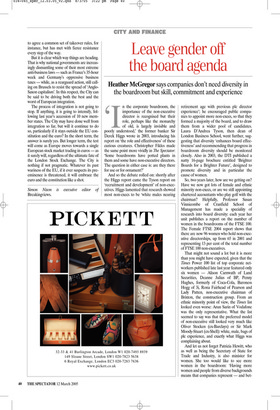 Simon Nixon says the City is now the driving force for European integration One of the most startling things about returning to work in the City after an absence of six years is how much the Square Mile has changed in such a short space of time. I don’t mean just the obvious things: the ‘erotic gherkin’ and other impressive new buildings that now dominate the skyline; or the flashy new bars, restaurants and sandwich shops that serve food you can actually eat; or the mind-boggling oneway system that makes the City almost impenetrable by car. The change that has struck me most is how European the City has become.

It is surely no exaggeration to suggest that the City is now the most European place on the planet. It is not just that London is by some distance the most cosmopolitan city in the EU. It is also the most European in the sense that it is the driving force for integration across the entire Continent. Politicians and bureaucrats may gather in Brussels and make grand speeches about our common European destiny while arguing over the correct shape of cucumbers. But the hard graft of European integration is being directed from the City. Indeed, at best, the politicians find themselves marching to the City’s tune. At worst, they are trying to stand in its way.

This is truly remarkable when you consider how suspicious the City has traditionally been towards Europe. Even in the late 1990s, there were serious worries that Frankfurt might replace London as the financial capital of Europe — a suggestion that is now universally recognised as preposterous even by those who have never been obliged to pass through that charmless German city. Meanwhile, Gordon Brown was sufficiently worried about the City’s fate that he made it the subject of a separate test in the Treasury’s assessment of whether Britain should join the euro. No other part of the economy was singled out for such treatment.

This suspicion of Europe came to a head four years ago when the German stock exchange group Deutsche B6rse first tried to take over the London Stock Exchange. The Germans encountered positively Churchillian nationalistic resistance. Yet when Deutsche B6rse announced its intentions to make another bid for the Stock Exchange late last year, prompting a similar move by its French rival Euronext, the news was greeted with barely a murmur. True, Deutsche B6rse has now withdrawn its renewed bid. But this time the row was entirely about price.

It is easy to see why the City has so enthusiastically embraced European integration. In the first place, the banks themselves are more European. Twelve years ago, when I started working for a firm of stockbrokers, the City was still dominated by banks such as Barings, Schroders and Warburgs. They may have had the Germansounding names of their immigrant founders, but they were quintessentially British and impossibly grand in a way that only a British institution can be.

These days many of the biggest employers in the City really are German — such as Deutsche Bank and Dresdner Bank — or Dutch or French. And the people who work for them, or for any of the big US banks here for that matter, are likely to be called Frederico or Raul or Anne-Marie and to be armed with doctorates and MBAs from all the best business schools. There are thousands of ambitious, multilingual graduates from all over Europe now seeking their fortunes in the Square Mile.

But the Europeanisation of the City is more than just a matter of personnel and brass name-plates. The nature of the business has changed. Even 12 years ago, much of the City was still primarily focused on the domestic UK market, a legacy of decades of exchange controls that ended only in the early 1980s. Investment research was organised largely along national lines, and corporate financiers relied for much of their income on domestic mergers, acquisitions and capital raisings, backed up by juicy fees that were a relic of a more clubby era. It was hard to do business in Europe with its different currencies and accounting standards, its lack of respect for shareholder rights and its unfamiliar stock exchanges — not to mention its languages.

These days, however, every bank of any consequence in London regards Europe not just Britain — as its domestic market. All the big banks now organise their research along pan-European lines. This means that companies such as BP and GlaxoSmithKline are now constantly compared with their most efficient European competitors, while most fund managers these days freely invest across national borders.

The result is that the City has done extraordinarily well out of European integration — far better than anybody dared hope. ‘The City is a boom town right now,’ one top company adviser told me recently. It has ridden out the millennium bear market and is likely to see a record number of initial public offerings this year. Companies from every part of Europe, including prospective EU members such as Ukraine and Turkey, are clamouring for the prestige of a UK listing.

But if Europe has transformed the City, then the City is also transforming Europe. Each morning planes take off from Heathrow every 30 seconds, dispatching armies of investment bankers to the corners of the Continent armed with plans to restructure companies and entire industries. The giant conglomerates that used to dominate the corporate scene, such as Hanson and the German group Mannesmann, have long been dismantled. In their place a new breed of focused European industry giants have emerged with ambitions to conquer the world.

True, this process has not gone as far as many in the City would like. Eurosceptic Britain may have embraced the single market, throwing open its borders to the free movement of people, goods and capital. But many other EU countries continue to refuse to play by the rules, looking for ways to protect their domestic companies from competition. The irony is that the worst offenders are the very countries normally thought to be the most pro-European, such as France, Germany and Italy. The Italian government, for example, outrageously refuses to allow foreign-owned banks to buy local banks. And Germany still allows listed companies to ignore the views of investors.

But the important point is that the City is winning. The City has financial muscle on its side, it has EU law on its side, and it increasingly has the EU Commission — which is proving surprisingly willing to use what powers it has to force recalcitrant EU members to open up their markets — on its side too. Only last week, it demanded that Portugal open up its energy market to foreign competition. Of course, this process still has a long way to run. The EU has been trying for years to agree a common set of takeover rules, for instance, but has met with fierce resistance every step of the way.

But it is clear which way things are heading. That is why national governments are increasingly dismantling some of their most extreme anti-business laws — such as France’s 35-hour week and Germany’s oppressive business taxes — while, as a rearguard action, still calling on Brussels to resist the spread of ‘AngloSaxon capitalism’. In this respect, the City can be said to be driving both the best and the worst of European integration.

The process of integration is not going to stop. If anything, it is going to intensify, following last year’s accession of 10 new member states. The City may have done well from integration so far, but will it continue to do so, particularly if it stays outside the EU constitution and the euro? In the short term, the answer is surely yes. But longer term, the test will come as Europe moves towards a single European stock market trading in euros — as it surely will, regardless of the ultimate fate of the London Stock Exchange. The City is nothing if not pragmatic. Whatever its past wariness of the EU, if it ever suspects its preeminence is threatened, it will embrace the euro and the constitution like a shot.