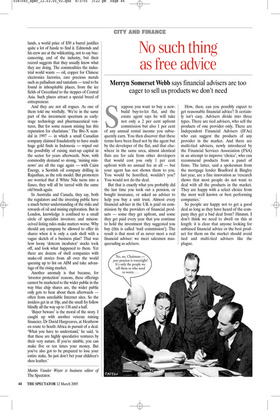 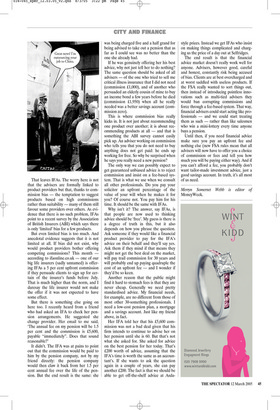 No such thing as free advice

Merryn Somerset Webb says financial advisers are too eager to sell us products we don’t need Suppose you want to buy a newbuild buy-to-let flat, and the estate agent says he will take not only a 2 per cent upfront commission but also 1 per cent of any annual rental income you subsequently earn. You then discover that these terms have been fixed not by the agent but by the developer of the flat, and that elsewhere in the same area, almost identical flats are for sale from other developers that would cost you only 1 per cent upfront with no annual fee at all — but your agent has not shown them to you. You would be horrified, wouldn’t you? You would not do the deal.

But that is exactly what you probably did the last time you took out a pension, or bought insurance, or asked an adviser to help you buy a unit trust. Almost every financial adviser in the UK is paid on commission by the providers of financial products — some they get upfront, and some they get paid every year that you continue to hold the investment they suggested you buy (this is called ‘trail commission’). The result is that most of us never meet a real financial adviser: we meet salesmen masquerading as advisers. How, then, can you possibly expect to get reasonable financial advice? It certainly isn’t easy. Advisers divide into three types. There are tied advisers, who sell the products of one provider only. There are Independent Financial Advisers (IFAs) who can suggest the products of any provider in the market. And there are multi-tied advisers, newly introduced by the Financial Services Association (FSA) in an attempt to improve ‘choice’, who can recommend products from a panel of firms. The latter, said a spokesman from the mortgage lender Bradford & Bingley last year, are a fine innovation as ‘research shows that most people do not want to deal with all the products in the market. They are happy with a select choice from the most well known or best performing companies.’ So people are happy not to get a good deal as long as they have heard of the company they get a bad deal from? Hmmm. I don’t think we need to dwell on this at length: it is clear that anyone looking for unbiased financial advice or the best product for them on the market should avoid tied and multi-tied advisers like the plague. That leaves IFAs. The worry here is not that the advisers are formally linked to product providers but that, thanks to commission bias — the temptation to suggest products based on high commissions rather than suitability — many of them still favour some providers over others. As evidence that there is no such problem, IFAs point to a recent survey by the Association of British Insurers (ABI) which says there is only ‘limited’ bias for a few products.

But even limited bias is too much. And anecdotal evidence suggests that it is not limited at all. If bias did not exist, why would product providers bother offering competing commissions? This month according to ifaonline.co.uk — one of our big life insurers (sadly unnamed) is offering IFAs a 5 per cent upfront commission if they persuade clients to sign up for certain of the insurer’s funds before July. That is much higher than the norm, and I daresay the life insurer would not make the offer if it was not expected to have some effect.

But there is something else going on here too. I recently heard from a friend who had asked an IFA to check her pension arrangements. He suggested she change provider. Her email to me said, ‘The annual fee on my pension will be 1.5 per cent and the commission is £5,600, payable “immediately”. Does that sound reasonable?’ It didn’t. The IFA was at pains to point out that the commission would be paid to him by the pension company, not by my friend directly: the pension company would then claw it back from her 1.5 per cent annual fee over the life of the pension. But the end result is the same: she was being charged five and a half grand for being advised to take out a pension that as far as I could see was no better than the one she already had.

If he was genuinely offering her his best advice, why not just tell her to do nothing? The same question should be asked of all advisers — of the one who tried to sell me critical illness insurance that I did not need (commission £1,000), and of another who persuaded an elderly cousin of mine to buy an income bond a few years before he died (commission £1,950) when all he really needed was a better savings account (commission zero).

This is where commission bias really kicks in. It is not just about recommending one product over another; it is about recommending products at all — and that is something the ABI survey cannot easily pick up. An adviser working on commission who tells you that you do not need to buy anything does not get paid: he ends up working for free. So why be surprised when he says you really need a new pension?

The only way we can possibly expect to get guaranteed unbiased advice is to reject commission and insist on a fee-based system. That is what we use when we consult all other professionals. Do you pay your solicitor an upfront percentage of the value of your will when he makes it for you? Of course not. You pay him for his time. It should be the same with IFAs.

Why isn’t it? The answer, say IFAs, is that people are now used to thinking advice should be ‘free’. My guess is there is a degree of truth in this, but it also depends on how you phrase the question. Ask someone if they would like a financial product provider to pay for the IFA’s advice on their behalf and they’ll say yes. Ask them if they mind if that means they might not get the best deal on the market, will pay trail commission for 30 years and will probably end up paying quadruple the cost of an upfront fee — and I wonder if they’d be so keen.

Another reason that the public might find it hard to stomach fees is that they are never cheap. Generally we need pretty standardised advice. My financial needs, for example, are no different from those of most other 30-something professionals. I need a low-cost pension plan, a mortgage and a savings account. Just like my friend above, in fact.

Her IFA told her that his £5,600 commission was not a bad deal given that his firm intends to continue to advise her on her pension until she is 60. But that’s not what she asked for. She asked for advice on the best pension for her today. That’s £200 worth of advice, assuming that the IFA’s time is worth the same as an accountant’s. If she wants to ask the question again in a couple of years, she can pay another £200. The fact is that we should be able to get off-the-shelf advice at Asda style prices. Instead we get IFAs who insist on making things complicated and charging us the price of a day out at Selfridges.

The end result is that the financial advice market doesn’t really work well for anyone. Advisers, however good, careful and honest, constantly risk being accused of bias. Clients are at best overcharged and at worst saddled with useless products. If the FSA really wanted to sort things out, then instead of introducing pointless innovations such as multi-tied advisers they would ban corrupting commissions and force through a fee-based system. That way, financial advisers could start acting like professionals — and we could start treating them as such — rather than like salesmen who win a mini-lottery every time anyone buys a pension.

Until then, if you need financial advice make sure you pay an upfront fee and nothing else (new FSA rules mean that all advisers will now have to offer you a choice of commission or fees and tell you how much you will be paying either way). And if you can’t afford a fee, you probably don’t want tailor-made investment advice, just a good savings account. In truth, it’s all most of us need.