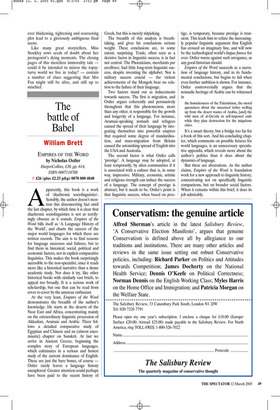 The battle of Babel

EMPIRES OF THE WORD by Nicholas Ostler HarperCollins, £30, pp. 614, ISBN 0007118708 ✆ £26 (plus £2.25 p&p) 0870 800 4848 Apparently, this book is a work of ‘diachronic sociolinguistics’. Sensibly, the author doesn’t mention this disconcerting fact until the last chapter, by which time it is clear that diachronic sociolinguistics is not as terrifyingly obscure as it sounds. Empires of the Word bills itself as ‘A Language History of the World’, and charts the careers of the major world languages for which there are written records. The aim is to find reasons for language successes and failures, but to find them in historical, social, political and economic factors, not in explicit comparative linguistics. This makes the book surprisingly accessible to the non-specialist, since it reads more like a historical narrative than a dense academic study. Nor does it try, like other historical books with similarly vast briefs, to appeal too broadly. It is a serious work of scholarship, but one that can be read from cover to cover by the amateur enthusiast.

At the very least, Empires of the Word demonstrates the breadth of the author’s knowledge. He starts in the deserts of the Near East and Africa, concentrating mainly on the extraordinary linguistic procession of Akkadian, Aramaic and Arabic. There follows a detailed comparative study of Egyptian and Chinese and an (almost encomiastic) chapter on Sanskrit. At last we arrive in Ancient Greece, beginning the complex story of European languages, which culminates in a serious and honest study of the current dominance of English. These are just the bare bones, of course Ostler rarely leaves a language history unexplored. Greater attention could perhaps have been paid to the recent history of Greek, but this is merely nitpicking.

The breadth of this analysis is breathtaking, and gives his conclusions serious weight. These conclusions are, to some extent, surprising. Trade, often seen as a decisive factor in linguistic success, is in fact not central. The Phoenicians, merchants par excellence, had little long-term linguistic success, despite inventing the alphabet. Nor is military success crucial — the violent achievements of the Mongols bear no relation to the failure of their language.

Two factors stand out as inducements towards success. The first is migration, and Ostler argues coherently and persuasively throughout that this phenomenon, more than any other, is responsible for the growth and longevity of a language. For instance, Aramaic-speaking nomads and refugees caused the spread of their language by integrating themselves into powerful empires that required some degree of standardisation, and mass-migration from Britain caused the astonishing spread of English into the USA and Australia.

The second factor is what Ostler calls ‘prestige’. A language may be adopted, at least temporarily, by alien communities if it is associated with a culture that is, in some way, impressive. Military, economic, artistic and religious strength can induce the success of a language. The concept of prestige is abstract, but it needs to be. Ostler’s point is that linguistic success, when based on pres tige, is temporary, because prestige is transient. This leads him to refute the increasingly popular linguistic argument that English has crossed an imaginary line, and will now be the technological world’s lingua franca for ever. Ostler warns against such arrogance, as any good historian should.

Empires of the Word succeeds as a narration of language history, and in its fundamental conclusions, but begins to fail when even further ambition is shown. For instance, Ostler controversially argues that the nomadic heritage of Arabic can be witnessed in

the homelessness of the Palestinians, the moral queasiness about the unearned riches welling up from the desert wastes of Arabia, [and] the wild men of al-Qa’eda in self-imposed exile while they plan destruction for the iniquitous cities.

It’s a smart theory, but a bridge too far for a book of this sort. And his concluding chapter, which comments on possible futures for world languages, is an unnecessary speculative appendix, which reveals more about the author’s politics than it does about the dynamics of language.

But these are aberrations. As the author claims, Empires of the Word is foundation work for a new approach to linguistic history, concentrating not on specifically linguistic comparisons, but on broader social factors. When it remains within this brief, it does its job admirably.