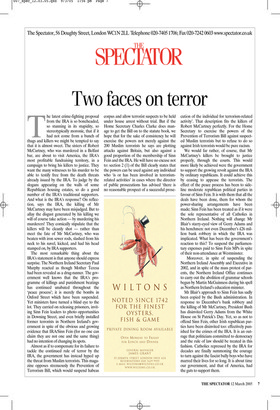 The latest crime-fighting proposal from the IRA is so boneheaded, so stunning in its stupidity, so stereotypically moronic, that if it had not come from a bunch of thugs and killers we might be tempted to say that it is almost sweet. The sisters of Robert McCartney, who was murdered in a Belfast bar, are about to visit America, the IRA’s most profitable fundraising territory, in a campaign to bring his killers to justice. They want the many witnesses to his murder to be able to testify free from the death threats already issued by the IRA. To judge by the slogans appearing on the walls of some Republican housing estates, so do a good number of the IRA’s traditional supporters. And what is the IRA’s response? On reflection, says the IRA, the killing of Mr McCartney may have been misjudged. But to allay the disgust generated by his killing we will of course take action — by murdering his murderers! They comically stipulate that the killers will be cleanly shot — rather than meet the fate of Mr McCartney, who was beaten with iron sewer rods, slashed from his neck to his navel, kicked, and had his head stamped on, by IRA supporters.

The most remarkable thing about the IRA’s statement is that anyone should express surprise. The Northern Ireland Secretary Paul Murphy reacted as though Mother Teresa had been revealed as a drug-runner. The government well knows that the IRA’s programme of killings and punishment beatings has continued unabated throughout the ‘peace process’; it is merely the bombs in Oxford Street which have been suspended. Yet ministers have turned a blind eye to the lot. They carried on releasing prisoners, inviting Sinn Fein leaders to photo opportunities in Downing Street, and even briefly installed former terrorists in Northern Ireland’s government in spite of the obvious and growing evidence that IRA/Sinn Fein (for no one can claim they are not one and the same thing) had no intention of changing its spots.

Almost as if to compensate for its failure to tackle the continued rule of terror by the IRA, the government has instead hyped up the threat from Muslim terrorists. This magazine opposes strenuously the Prevention of Terrorism Bill, which would suspend habeas corpus and allow terrorist suspects to be held under house arrest without trial. But if the Home Secretary Charles Clarke does manage to get the Bill on to the statute book, we hope that for the sake of consistency he will exercise the powers not merely against the 200 Muslim terrorists he says are plotting attacks against Britain, but also against a good proportion of the membership of Sinn Fein and the IRA. He will have no excuse not to: section 2 (1) of the Bill clearly states that the powers can be used against any individual who ‘is or has been involved in terrorismrelated activities’ in cases where the director of public prosecutions has advised ‘there is no reasonable prospect of a successful prose cution of the individual for terrorism-related activity’. That description fits the killers of Robert McCartney perfectly. For the Home Secretary to exercise the powers of the Prevention of Terrorism Bill against suspected Muslim terrorists but to refuse to do so against Irish terrorists would be pure racism.

We would far rather, of course, that Mr McCartney’s killers be brought to justice properly, through the courts. This would more likely be achieved were the government to support the growing revolt against the IRA by ordinary republicans. It could achieve this by ceasing to appease the terrorists. The effect of the peace process has been to sideline moderate republican political parties in favour of Sinn Fein. It is with them that all the deals have been done, them for whom the power-sharing arrangements have been made; Sinn Fein has been treated as if it were the sole representative of all Catholics in Northern Ireland. Nothing will change Mr Blair’s starry-eyed view of Gerry Adams and his henchmen: not even December’s £26 million bank robbery in which the IRA was implicated. What has been the government’s reaction to this? To suspend the parliamentary expenses paid to Sinn Fein MPs in spite of their non-attendance at Westminster.

Mr Blair’s approach to Sinn Fein has sadly been copied by the Bush administration. In response to December’s bank robbery and the killing of Mr McCartney, President Bush has disinvited Gerry Adams from the White House on St Patrick’s Day. Yet, so as not to offend Sinn Fein, other Irish republican parties have been disinvited too: effectively punished for the crimes of the IRA. It is an outrage that politicians committed to democracy and the rule of law should be treated in this fashion. Catholics repressed by the IRA for decades are finally summoning the courage to turn against the fascist bully boys who have marred their lives for so long. It is about time our government, and that of America, had the guts to support them.