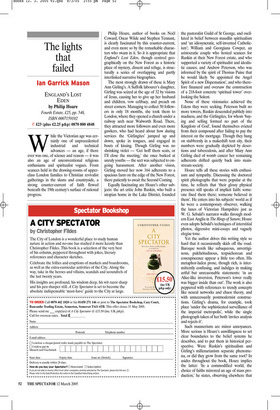 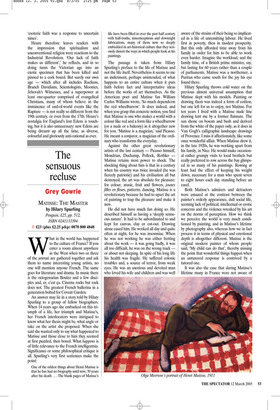 The lights that failed

ENGLAND’S LOST EDEN by Philip Hoare Fourth Estate, £25, pp. 548, ISBN 0007159102 ✆ £23 (plus £2.25 p&p) 0870 800 4848 While the Victorian age was certainly one of unprecedented industrial and technical advances — an age, if there ever was one, of science and reason — it was also an age of unconventional religious enthusiams and spiritualist vogues. From seances held in the drawing-rooms of upperclass London families to Christian revivalist gatherings in the slums and countryside, a strong counter-current of faith flowed beneath the 19th century’s surface of rational progress. Philip Hoare, author of books on Noël Coward, Oscar Wilde and Stephen Tennant, is clearly fascinated by this counter-current, and even more so by the remarkable characters who swam in it. So it is appropriate that England’s Lost Eden, though centred geographically on the New Forest as a historic place of mystery, dissent and refuge, is structurally a series of overlapping and partly interlinked narrative biographies.

The most strongly drawn of these is Mary Ann Girling’s. A Suffolk labourer’s daughter, Girling was seized at the age of 32 by visions of Jesus, causing her to give up her husband and children, vow celibacy, and preach on street corners. Managing to collect 50 followers in only 18 months, she took them to London, where they opened a church under a railway arch near Walworth Road. There, they attracted more followers and even more gawkers, who had heard about how during services the ‘Girlingites’ jumped up and down, spoke in tongues, and engaged in bouts of kissing. Though Girling was no shrinking violet — ‘Get hoff them seats, or I’ll close the meeting,’ she once barked at unruly youths — the sect was subjected to ongoing harassment. After another vision, Girling moved her now 164 adherents to a spacious farm on the edge of the New Forest, there patiently to await the Second Coming.

Equally fascinating are Hoare’s other subjects: the art critic John Ruskin, who built a utopian home in the Lake District, founded the pastoralist Guild of St George, and oscillated in belief between maudlin spiritualism and ‘an idiosyncratic, self-invented Catholicism’; William and Georgiana Cowper, an aristocratic couple who hosted seances for Ruskin at their New Forest estate, and who supported a variety of spiritualist and idealistic causes; and Andrew Peterson, who was informed by the spirit of Thomas Paine that he would likely ‘be appointed the Angel Spirit of a new Dispensation’, and who therefore financed and oversaw the construction of a 218-foot concrete ‘spiritual tower’ overlooking the Solent.

None of these visionaries achieved the Edens they were seeking. Peterson built no more towers, Ruskin descended publicly into madness, and the Girlingites, for whom ‘buying and selling formed no part of the Kingdom of God’, found themselves evicted from their compound after failing to pay the interest on the mortgage. Though they hung on stubbornly in a makeshift tent city, their numbers were gradually depleted by desertions and tuberculosis, and after Mary Ann Girling died of womb cancer her remaining adherents drifted quietly back into mainstream society.

Hoare tells all these stories with enthusiasm and sympathy. Discussing the doctored spirit photographs that were popular at the time, he reflects that ‘their glossy physical presence still speaks of implicit faith: someone fixed them there; someone believed in them’. He enters into his subjects’ world as if he were a contemporary observer, walking the lanes of Victorian Hampshire just as W. G. Sebald’s narrator walks through modern East Anglia in The Rings of Saturn; Hoare even adopts Sebald’s techniques of interstitial photos, digressive mini-essays and vaguely elegiac tone.

Yet the author drives this writing style so hard that it occassionally skids off the road. Baroque words like subaqueous, unvertiginous, pulchritudinous, terpsichorean and concupiscence appear a little too often. His metaphor-laden prose, though rich, is intermittently confusing, and indulges in making artful but unreasonable statements: ‘in an Alice-like inversion, Peterson’s tower really was bigger inside than out’. The work is also peppered with references to trendy concepts like neural networks and chaos theory, and with unnecessarily postmodernist constructions. Girling’s drama, for example, took place ‘under the sophisticated surveillance of the imperial metropolis’, while the single photograph taken of her both ‘invites analysis and rejects it’.

Such mannerisms are minor annoyances. More serious is Hoare’s unwillingness to set clear boundaries to the belief systems he describes, and to put them in historical perspective. Were Ruskin’s spiritualism and Girling’s millenarianism separate phenomena, or did they grow from the same root? In asides throughout the book, Hoare implies the latter: ‘In a commodified world, the choice of faiths mirrored an age of mass production,’ he states, observing elsewhere that ‘esoteric faith was a response to uncertain times’.

Hoare therefore leaves readers with the impression that spiritualism and unconventional religion were reactions to the Industrial Revolution. ‘Our lack of faith makes us different’,’ he reflects, and in so doing turns the Victorian age into an exotic specimen that has been killed and pinned to a cork board. But surely our own age — which after all includes Raelians, Branch Davidians, Scientologists, Moonies, Jehovah’s Witnesses, and a superpower at least one-quarter comprised of evangelical Christians, many of whom believe in the imminence of end-of-world events like the Rapture — is not really so different from the 19th century, or even from the 17th. Hoare’s nostalgia for England’s lost Edens is touching, but it is also unnecessary: new Edens are being dreamt up all the time, as diverse, colourful and gloriously anti-rational as ever.