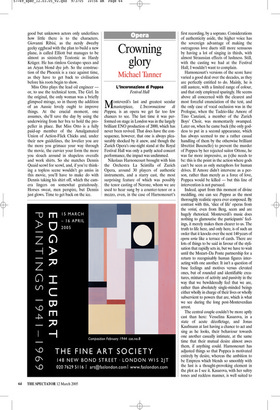 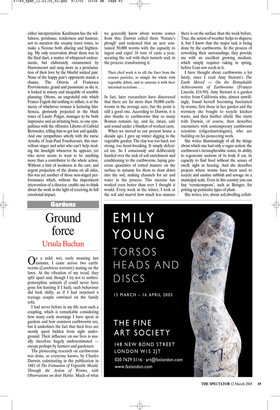 L’Incoronazione di Poppea Festival Hall Monteverdi’s last and greatest secular masterpiece, L’Incoronazione di Poppea, is an opera we get far too few chances to see. The last time it was performed on stage in London was in the largely brilliant ENO production of 2000, which has never been revived. That does have the consequence, however, that one is always pleasurably shocked by it anew, and though the Zurich Opera’s one-night stand at the Royal Festival Hall was only a partly acted concert performance, the impact was undimmed.

Nikolaus Harnoncourt brought with him the Orchestra La Scintilla of Zurich Opera, around 30 players of authentic instruments, and a starry cast, the most surprising feature of which was possibly the tenor casting of Nerone, whom we are used to hear sung by a counter-tenor or a mezzo, even, in the case of Harnoncourt’s first recording, by a soprano. Considerations of authenticity aside, the higher voice has the sovereign advantage of making the outrageous love duets still more sensuous by having a lot of singing in thirds, with almost Straussian effects of lushness. Still, with the casting we had at the Festival Hall, I wouldn’t want to complain.

Harnoncourt’s versions of the score have varied a good deal over the decades, as they are perfectly entitled to do. Mainly, he is still austere, with a limited range of colour, and that only employed sparingly. He seems above all concerned with the clearest and most forceful enunciation of the text, and the only case of vocal occlusion was in the Prologue, when the Tadzio-like Amore of Tino Canziani, a member of the Zurich Boys’ Choir, was momentarily swamped. Later on, when he came back (the only goddess to put in a second appearance, which has always seemed to me a rather casual handling of them by the otherwise brilliant librettist Busenello) to prevent the murder of Poppea by her rejected suitor Ottone, he was far more impressive, as (s)he needs to be: this is the point in the action where gods can’t be seen as only metaphors for human drives. If Amore didn’t intervene as a person, rather than merely as a force of love, Poppea would be killed — but this line of intervention is not pursued.

Indeed, apart from this moment of divine meddling, one can see Poppea as the most thoroughly realistic opera ever composed. By contrast with this, ‘slice of life’ operas from the veristi, even from Berg, seem and are hugely rhetorical. Monteverdi’s music does nothing to glamourise the participants’ feelings, it merely makes them clearer to us. The truth to life here, and only here, is of such an order that it knocks over the next 140 years of opera seria like a terrace of cards. There are lots of things to be said in favour of the stylisation that rapidly sets in, but we have to wait until the Mozart–Da Ponte partnership for a return to recognisably human figures interacting with one another. It isn’t a question of base feelings and motives versus elevated ones, but of rounded and identifiable creatures, mixtures of activity and passivity in the way that we bewilderedly feel that we are, rather than absolutely single-minded beings either wholly in charge of their lives or wholly subservient to powers that are, which is what we see during the long post-Monteverdian arrest.

The central couple couldn’t be more aptly cast than here: Vesselina Kasarova, in a state of acute décolletage, and Jonas Kaufmann at last having a chance to act and sing as he looks, their behaviour towards one another casually intimate, at the same time that their mutual desire almost awes them, if anything could. Harnoncourt has adjusted things so that Poppea is motivated entirely by desire, whereas the ambition to be Empress which blends so smoothly with the lust is a thought-provoking element in the plot as I see it. Kasarova, with her sultry tones and reckless manner, is well suited to either interpretation. Kaufmann has the wilfulness, petulance, tenderness and hauteur, not to mention the creamy tenor tones, to make a Nerone both alluring and frightening. My only reservation about them was in the final duet, a matter of whispered endearments, but elaborately ornamented by Harnoncourt and sung more as a proclamation of their love by the blissful wicked pair. None of the happy pair’s opponents stands a chance. The Ottavia of Francesca Provvisionato, grand and passionate as she is, is locked in misery and incapable of sensible planning; Ottone, an ungrateful role which Franco Fagioli did nothing to inflate, is at the mercy of whichever woman is lecturing him. Seneca, gloriously projected in the black tones of Laszlo Polgar, manages to be both impressive and an irritating bore, so one sympathises with the offensive Liberto of Gabriel Bermudez, telling him to get lost and quickly. And one sympathises utterly with the nurse Arnalta of Jean-Paul Fouchecourt, this marvellous singer and artist who can’t help stealing the limelight whenever he appears, yet who never seems to want to be anything more than a contributor to the whole action. Without a hint of weakness in the cast, and urgent projection of the drama on all sides, this was yet another of those non-staged performances which, without the impertinent intervention of a director, enable one to think about the work in the light of receiving its full emotional impact.