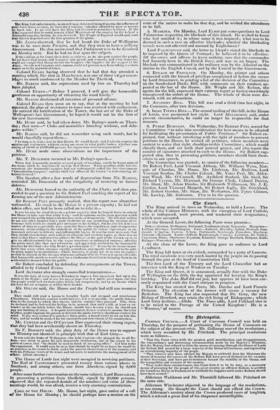 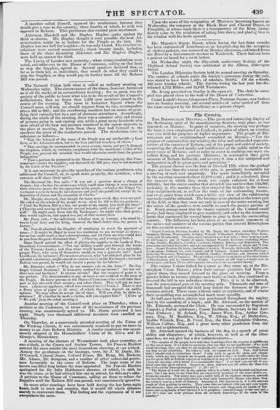 Cosmos ConscaL.—A Court of Common Council was held on Thursday, for the purpose of petitioning the House of Commons on the subject of the present crisis. Mr. Galloway moved the resolutions ; which were seconded by Mr. Pritchard. The principal resolutions were as follows- " That this Court views with the greatest grief, mortification, and disappointment, the extraordinary and distressing communication made by his Majesty's Ministers, that his Majesty had refused to them the means of carrying through the house of Lords the Reform Bill passed by a large majority of the house or Commons, and required by an overwhelming majority of the people. " That whoever may have advised his Majesty to withhold from his Ministers the means of insuring the success of the Reform Bill, have proved themselves the enemies of their Sovereign, and have put to imminent hazard the stability of the throne, and the tranquillity and security of the country. " That, 1111411,r these circumstances. this Court feels it to be its duty, as a necessary means of procuring for the people of this great country- an efficient Reform, to petition the Commons House of Parliament to withholdthe Supplies until such a Reform should have been secured."

Alderman Waithman and Mr. Thornhill followed Mr. Pritchard on. the same side.

Alderman Winchester objected to the language of the resolutions as too strong. He thought the Court should not-offend the Crown. The Alderman's anxiety about the Crown produced roars of laughtert. which rendered a great deal of his eloquence unintelligible. A member called Rowell, opposed the resolutions, because they would give a tone to the country ; three fourths of which, he said, was opposed to Reform. This gentleman also excited great merriment. Alderman Marshall and Mr. Hughes Hughes spoke against the third resolution. Mr. Hughes thought it very possible the next Ad- ministration might be as zealous for the People as the last. Mr. Buglies was too dull for laughter—he was only hissed. The two first re- solutions were carried unanimously; about twenty hands, including those of the three dissenting Aldermen and Mr. Hughes Hughes, were held up against the third. The Livery of London met yesterday ; when strong resolutions were voted, and addresses to the Rouse of Commons, calling on that body to stop the Supplies, agreed to. Several speakers declared that, as far as in them lay, as individuals, they would do what they could to stop the Supplies, as they would pay no further taxes till the Reform Bill was passed.