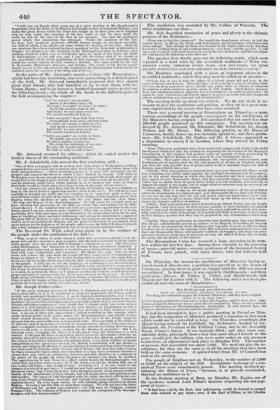 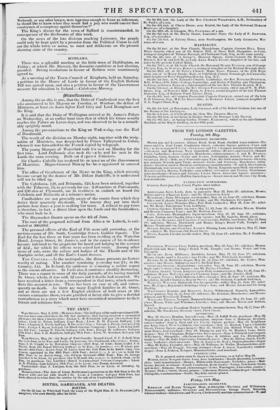 Page 12, 12 May 1832 — On Thursday, the instant the intelligence of Ministers having re-
Close

On Thursday, the instant the intelligence of Ministers having re-

signed reached Manchester, a petition was agreed on to the House of Commons, playing them to grant no Supply until the Bill was passed umoutilated. In four hours, it was signed by 25,000 people ; and three gentlemen—Messrs. R. Potter, J. Filden, and Shuttleworth—left Manchester for London with it. The following notice has been pla- carded all over the town of Manchester-

" COVRT INTRIGUE Has, fur the present, prevailed over the

The King has refined to support his Patriotic Ministers, and they have resigned.

WHAT IS TO ME DONE NOW ?

Let the People petition the Commons to refine the Supplies, and let them firm Asso- ciations pledged to discontinue the use mall Ta.red Commodities. These are the peaceable means Of destroying the $oroughmongceiug domination. It will depend upon the Usurpers whet her' other measures need be resorted to."

It had been intended to have a public meeting in Bristol on Mon- day, but the resignation of Ministers produced a sensation in that town which could not be controlled so long. On Thursday, accordingly, the Mayor having refused the Guildhall, the Reformers, headed by Air. Herapath, the President of the Political Union, met in the Assembly Room, Prince's Street. It was instantly filled ; and after some con- siderable delay, principally from a fear that some alleged breach of the peace should give the military, who were under orders to act, pretence to interfere, an adjournment took place to Brandon 1-1111. The number of persons that assembled was about 7,000. We need not give the re, solutions, for they are the same as in all the meetings that have been held on the same occasion. A spirited letter from Mr. O'Connell was read at the meeting.

The people of 'Brighton met on Wednesday, to the number of '2,000 or 3,000, on the subject of the Bill. Resolutions in favour of a cre- ation of Peers were unanimously passed. The meeting declined pe- titioning the House of Peers, " because, as at present constituted, they had no confidence in it." At the Reform meeting at Bury, on Monday, Mr. Eagles, one of the speakers, noticed Lord Eldon's doctrine respecting the non-pay- ment of taxes-

" It had been said by the Earl, that indictments -could be framed to compel- those who refused to pay taxes; now, if the Earl of Eldon, or Sir Charley

Wetherell, or any other lawyer, were ingenious enough to frame an indictment, he should like to know where they would find a jury who would convict their countrymen of a conspiracy against themselves ?"

The King's dinner for the town of Salford is countermanded, in consequence of the disclosures of this week.

On the news of the late division reaching Leicester, the people could only be kept quiet by a promise from the Political Union to call out the whole town en masse, to meet and deliberate on the present alarming state of the country.