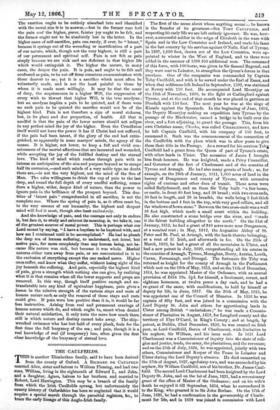 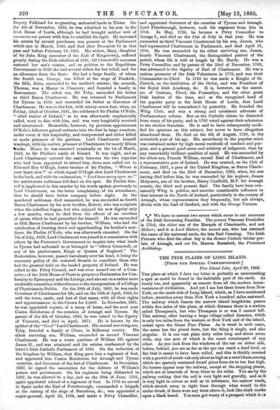 'THIS is another Elizabethan family, said to have been derived -A- from the county of Oxford. A RICHARD DE CADLFELD married Alice, sister and heiress to William Fleming, and had two sons, William, living in the eighteenth of Edward I., and John, and a daughter, Agnes, heiress to her brothers, and married to Robert, Lord Harrington. This may be a branch of the family from which the Irish Caulfeilds sprang, but unfortunately the county history of Oxfordshire has been so neglected that it would require a special search through the parochial registers, &c., to trace the early lineage of this Anglo-Irish family.

Deputy Falkland for re-granting escheated lands in Ulster. On the 4th of November, 1634, he was admitted to his seat in the Irish House of Lords, although he had brought neither writ of summons nor patent with him to establish his right. He increased his estates by several purchases, was present at the Parliament which met in March, 1640, and died after December 13 in that year and before February 18, 1641. His widow, Mary, daughter of Sir John King (ancestor of the Earl of Kingstown), suffered greatly during the Irish rebellion of 1641, till Cromwell's successes restored her son's estates, and on petition to the Republican Government in 1653 she had several orders for her relief, and for an allowance from the State. She had a large family, of whom the fourth son, George, was killed at the siege of Dunkirk ; the fifth, John, succeeded to his mother's estates ; the seventh, Thomas, was a Master in Chancery, and founded a family in Roscommon. The eldest son, Sir Toby, succeeded his father as third Baron Charlemont. He was returned to Parliament for Tyrone in 1639, and succeeded his father as Governor of Charlemont. He was in this fort, with ninety-seven foot, when, on Friday, 22nd of October, 1641, the celebrated Sir Phelim O'Nelle, "chief traitor of Ireland," as he was afterwards emphatically called, went to dine with him, and was very hospitably received and entertained. Meanwhile, however, by previous appointment O'Neile's followers gained entrance into the fort in large numbers, under cover of this hospitality, and overpowered and either killed or made prisoners of the garrison. Lord Charlemont himself was kept, with his mother, prisoner at Charlemont for nearly fifteen *reeks. Hence he was removed eventually on the 1st of March, 1642, to Sir Phelim's castle of Kinard. It was night, and as Lord Charlemont entered the castle between the two captains who had been appointed to attend him, these men called out to Edmund Roy O'Hugh, foster brother of Sir Phelim, "Where is your heart now ?" on which signal O'Hugh shot Lord Charlemont in the back, and with the exclamation, "Lord have mercy upon me 1" the unfortunate nobleman fell dead on the spot. Sir Phelim him- self is implicated in this murder by his words spoken previously to Lord Charlemont, on the latter complaining of his attendance, that he should have better company before night. As the murdered nobleman died unmarried, he was succeeded as fourth Baron Charlemont by his next brother, Robert, who was a captain when the rebellion began, but who enjoyed his new dignity only a few months, when he died from the effects of an overdose of opium which he had prescribed for himself. He was succeeded as fifth Baron Charlemont by his brother, William, who had the satisfaction of hunting down and apprehending his brother's mur- derer, Sir Phelim O'Neile, who was afterwards executed. On the 7th of July, 1658, Lord Charlemont was joined in a commission with others by the Protector's Government to inquire into what lands in Tyrone had escheated to or belonged to "Oliver Cromwell, or any of his predecessors, Kings or Queens of England." The Restoration, however, passed harmlessly over his head, it being the necessary policy of the restored Stuarts to conciliate those who had the greatest hold on the landed property of Ireland. He was called to the Privy Council, and was even named one of a Com- mi ttea of the Irish House of Peers to prepare a Declaration for Con- formity to Episcopacy and the Liturgy, and also sat on a rather more creditable committee withreference to the incorporation of a College of Physicians in Dublin. On the 28th of July, 1661, he was made Governor of Charlemont for life, and on the 13th of April, 1664, he sold the town, castle, and fort of that name, with all their rights and appurtenances, to the Crown for 3,500/. In November, 1661, he was appointed captain of a troop of horse, and the next year Custos Rotulorum of the counties of Armagh and Tyrone. By patent of the 8th of October, 1665, he was raised to the dignity of Viscount, and died in April, 1671. He is known by the epithet of the "Good "Lord Charlemont. His second surviving son, Toby, founded a family at Clone, in Kilkenny county. His eldest surviving son, William, succeeded as second Viscount Charlemont. He was a warm partizan of William III. against James 11., and was attainted and his estates confiscated by the latter's Irish Catholic Parliament of 1689. On the reduction of the kingdom by William, that King gave him a regiment of foot, and appointed him Cnstos Rotulorum for Armagh and Tyrone counties, and Governor of the fort of Charlemont. In December, 1697, he signed the association for the defence of William's person and government. On his regiment being disbanded in 1697, he was allowed 8s. a day, and on the 28th of Jane, 1701, again appointed colonel of a regiment of foot. In 1705 he served in Spain under the Earl of Peterborough, commanded a brigade at the raising of the siege of Barcelona, &c., was appointed a major-general, April 22, 1708, and made a Privy Councillor,

and appointed Governor of the counties of Tyrone and Armagh. Lord Peterborough, however, took his regiment from him in 1706. In May, 1726, he became a Privy Councillor to George I., and died on the 21st of July in that year. He was succeeded as third Viscount Charlemont by his son, James, who had represented Charlemont in Parliament, and died April 21, 1734. He was succeeded by his eldest surviving son, James, fourth Viscount Charlemont, the distinguished patriot of the period, whose life is told at length by Mr. Hardy. He was a Privy Councillor, and by patent of the 23rd of December, 1763, was advanced to the dignity of Earl of Charlemont. He was a zealous promoter of the Irish Volunteers in 1779, and was their Commander-in-Chief. In 1783 he was made a Knight of St. Patrick, on the institution of the Order, and was President of the Royal Irish Academy, &c. It is, however, as the associ- ate of Grattan, Flood, the Ponsonbys, and the other great Irish leaders of the time, and as the recognized head of the popular party in the Irish House of Lords, that Lord Charlemont will be remembered by posterity. He founded the Whig Club, and was a strong and consistent advocate of Parliamentary reform. But on the Catholic claims he dissented from many of his party, and in 1793 voted against their ailiniasion to the elective franchise. He is said to have subsequently modi- fied his opinions on this subject, but never to have altogether abandoned them. He died on the 4th of August, 1799, in the seventieth year of his age. His ascendancy in the popular mind. was sustained rather by high moral rectitude of conduct and pur- pose, and a general good sense and sobriety of judgment, than by any remarkably brilliant qualities of mind. He was succeeded by his eldest son, Francis William, second Earl of Charlemont, and a representative peer of Ireland. He was created, on the 13th of February, 1837, a peer of the United Kingdom, as Baron Charle- mont, and died on the 23rd of December, 1863, when, his sod having died before him, he was succeeded by his nephew, James Molyneux, son of his brother, Henry Caulfeild, M.P. for Armagh county, the third and present Earl. The family have been con- sistently Whig in politics, and exercise considerable influence in that interest in the North of Ireland, particularly in the county of Armagh, whose representation they frequently, but not always, divide with the Earl of Gosfond, and with the Orange Verners.