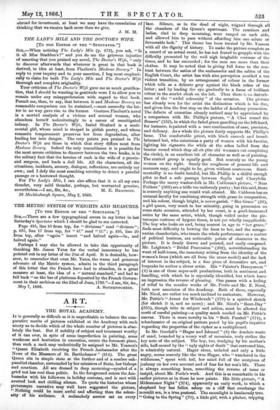 THE METRIC SYSTEM OF WEIGHTS AND MEASURES. [To THE EDITOR

Sia,—There are a few typographical errors in my letter in last Saturday's Spectator which I should be glad to see corrected.

Perhaps I may also be allowed to take this opportunity of thanking Mr. James Yates for the verbal inaccuracy he has pointed out in my letter of the 21st of April. It is desirable, how- ever, to remember that even Mr. Yates, the warm and generous advocate of the Metric system, admits in the third paragraph of this letter that the French have had to abandon, in a great measure at least, the idea of a "natural standard," and had to fall back "on the bar of platinum deposited by the French Govern- ment in their archives on the 22nd of June, 1799."—I am, Sir, &c.,