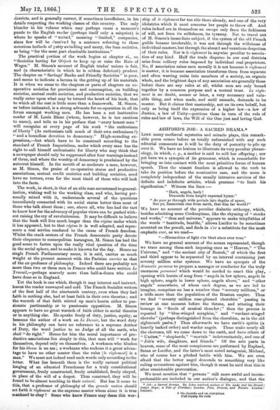 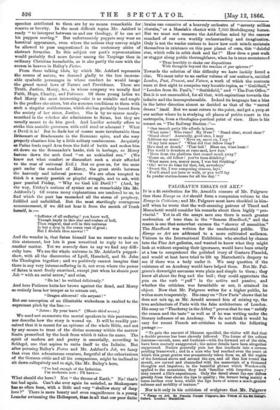 ASHFORD'S JOB: A SACRED DRAMA.* LIKE many medlieval mysteries and

miracle plays, this remark- able poem comes before us totally unfurnished with any such editorial comments as it will be the duty of posterity to pile up over it. We have no lexicon to illustrate its very peculiar phrase- ology, in which, e. g., a mother is said to milk her offspring ; nor yet have we a synopsis of its grammar, which is remarkable for bringing us into contact with the most primitive forms of human speech. Thus the utmost freedom is allowed to the verb to take its position before the nominative case, and the noun is completely independent of the usually intrusive services of the definite and indefinite articles, which presume "to limit his signification." Witness the lines :—

"As gaze ye through wide portals into depths of space, See ye, Immortala rise from earth, that dim far world?" We have no account of the peculiar dialectic orthoepy, which, besides admitting some Cockneyisms, like the rhyming of "stocks and works," "thus and universe," appears to make trisyllables of the words "beatitude, beatific," allows Lucifer to be sometimes accented on the penult, and finds in e'er a substitute for the most emphatic ever, as we read— "—Hierarchies of light e'er blest since ever true."

• Job: a Sacred Drama. By John Ashford. author of The Lady and the Hound ; Italy's Hope; a Tale of Florence; London, Past, Present, and Future. Loudon: Bennett.

.1. On cherubs and on chernblma

Full royally He rode We have no general account of the scenes represented, though we trace among them such imposing ones as "Heaven," "The Universe," and "the ancient city of Bozrah," of which the first and third appear to be separated by an interval containing just seventy million solar systems. We have no synopsis of the dramatis persons to prepare a manager or conductor for the truly enormous personnel which would be needed to enact this play, . opening with bursts of song from "angels in low sphere, angels in high sphere, angels in lower sphere, angels above," and "other angels" somewhere, of whom each degree, as we are led to imagine, comprises no less a number than "seventy millions," or a trifle more than the population of the Russian empire. Thus we find "seventy million rose-plumed cherubim" passing in review at one moment before the throne, and uttering their homage in "floods of musical thunder ;" then the process is repeated by "blue-winged seraphim," and "verdant-winged cherubs" (perhaps distinguished from the cherubim, as in the old eighteenth pealm.l. Then afterwards we have earth's spirits (a heavily tasked order) and warder angels. These make nearly all the choruses, till we come down to the earth, and have others of "Unites," "shepherds," " mortals " indeterminately, and one of "Job's wife, daughters, and friends." Of the solo parts in heaven, some of the most conspicuous are performed by Raphael, Satan or Lucifer, end the latter's most noted antagonist, Michael, who of course has a pitched battle with him. We are even afraid that the better angel descends to something very like railing accusations against him, though it must be said that this is after considerable provocation.

We must mention that " persons " still more awful and incom- prehensible are included in our author's dialogue, and that the speeches attributed to them are by no means remarkable for reserve or brevity. In the most difficult topics Mr. Ashford is ready "to interpret between us and our theology, if he can set his puppets moving." But unfortunately puppets may wear an heretical appearance, even where the notions they convey might be allowed to pass unquestioned in the customary attire of abstract formulas. In this subject our poet's representations would probably find more favour among the Taepiegs than in ordinary Christian households, as is also partly the case with the scenes in heaven in Bailey's Festus.

From these talking idols, by which Mr. Ashford represents the source of nature, we descend gladly to the less inexcus- able symbolic personages in whose conduct he would image the grand moral laws of Nature and Providence. These are Truth, Justice, Mercy, &c., in whose company we usually find Faith, Hope, Charity, and Patience. Of these young ladies we find Mercy the most interesting—she is so amiable and ample In the proffers she utters, but she annexes conditions to them with Such a singular stubbornness, which she has probably learnt from the society of her sister, Justice. She is by no means mealy- mouthed in the rebukes she administers to Satan, but they are usually meant to do him good. And Lucifer actually offers to strike this amiable governess with cold steel or adamant ? What a Devil it is! But he finds her of manse more invulnerable than Britonaart or Bradamante in the Romance epics, and she very properly chastises him by a little solitary confinement. As quietly Its Pallas leads rapid Area from the field of battle and makes him sit down on the Scamander's banks, rich in herbage, so Mercy fastens down the arch fiend "on an unkindled sun." (We know not what comfort or discomfort such a chair afforded to the rear of universal Evil.) But so goes on, for the most part under the couduet of Mercy, the great strife between the heavenly and infernal powers. We are often tempted to think it s. merely peevish or playful struggle, and to ask, with poor 'marled Friday, "Why no God kill Devil ? " (And, by the way, Friday's notions of syntax are so remarkably like Mr. Ashford's!) Of course many explanations are tendered to us, to find which the poet has ransacked all the stores of prophecy, fulfilled and unfulfilled. But the most startlingly courageous announcement, if we did not hear it from the month of Truth Immelf, is :— "Infifoter of all suffering ! you know well, Though Imply in this star and realms of hell, Thou reign'st, that evil in this universe Is but a drop in the ocean vast of good ; But I disdain thee answer !"

And the wonder is, that Satan himself has no answer to make to this statement, but lets it pass unnoticed to reply to her on another matter. Yet we scarcely dare to say we find any diffi- culty here. We see the whole universe in Mr. Ashford's puppet- show, with all the discoveries of Lyell, Herschell, and St. John the Theologian together ; and we positively cannot imagine that there is any very intense suffering in it, not even where the power of Satan is most freely exercised, except just when he shoots poor Job "with an aerial arrow," and cries, "Ha ha! he writhed deliciously."

And here Patience knits her brows against the fiend, and Mercy so entirely loses her temper as to scream out, "Dragon abhorred! vile serpent ! "

But our conception of an illimitable wickedness is exalted to the 'glummest pitch by the line :—

We need not enumerate the mortal speakers in this pantomime, nor describe how the story is wound up. It will be readily per- ceived that it is meant for an epitome of the whole Bible, and not by any means to treat of the divine economy within the narrow limits prescribed by the book from which it takes its name. The spirit of modern art and poetry is essentially, according to Schlegel, one that aspires to unite itself to the Infinite. But after perusing Bailey's Festus and Mr. Ashford's Job, we fancy that even this adventurous creature, forgetful of the exhortations of the German critic and all his companions, might be inclined to sit down collapsively and to sigh, like Mr. l3ailey's hero,

"I've had enough of the Infinities. I'm moderate now : I'll have—

What should she have ? Not "the throne of Earth." No! that's too bad again. Can't she ever again be satisfied, as Shakespeare has so often been, with a little and very "shallow story of deep love ?" There is more beauty and even magnificence in a young Leander swimming the Hellespont, than in all that our poor finite brains can conceive of a heavenly orchestra of "seventy million cherubs," or a Messiah's chariot with 7,000 Brobdiugnag horses. But we must not measure the .Ashfordian mind by the narrow standard of our own worldly understanding and imagination. Only is not the reader curious to know how such minds maintain themselves in existence on this poor planet of ours, this "doleful star, which rolls in orbit dark and far ?" How deea a poet walk or stagger along public thoroughfares, when he is once aceu.stomed "Thus horribly to shake our dispositions With thoughts beyond the reaches of par spheres ?"

Towards the solution of this difficulty we have luckily found a clue. We must refer to an earlier volume of our author's, entitled London, Past, Present, and Future, a work of which the contents seem at first sight to comprise very humble topics, as " Guildhall," "London from St. Paul's," "Smithfield," and " The Post Office." But it is not unennobled, for all that, with aspirations towards the infinite and the incomprehensible. Indeed its language has a bias in the latter direction almost as decided as that of the "sacred drama" itself. But we must return to the point, audget a peep at our author where he is studying all places of public resort in the metropolis, from a theologico-poetical point of view. Here is his sonnet on "The Railway Station :"— " One tumult petty life affords is here. What noise ! Who runs? My Muse!' 'Stand clear, stand clear !'

The world is drunken or runs mad, bow fast.'

'Move from the platform that crazed monk away !'

What mean yen, marry anon, I was but thinking.'

'You'll stand not here or walk, or you we'll lay In yonder station-house for all the day.'"