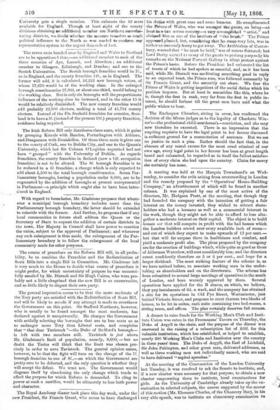 Page 2, 12 May 1866 — The Irish Reform Bill only distributes three seats, which it
Close

The Irish Reform Bill only distributes three seats, which it

gains by grouping Kinsale with Bandon, Portarlington with Athlone, and Dungannon with Enniskillen. Of these three seats it gives one to the county of Cork, one to Dublin City, and one to the Queen's University, which last Sir Colman O'Loghlen regretted had not been " grouped " with the University of Dublin. As regards franchises, the county franchise in Ireland (now a 12/. occupation franchise) is not to be altered. The 8/. borough franchise is to be reduced to a 61. franchise, a change which is only expected to add about 5,500 to the total borough constituencies. Seven Par- liamentary boroughs, having a population under 8,000, are to be augmented by the addition of boroughs at present unrepresented in Parliament—a principle which ought also to have been intro- duced in England.