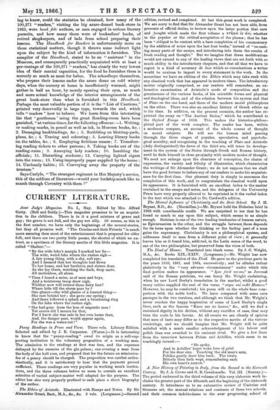 Aunt Judy's Magazine. No. I., May. Edited by Mrs. Alfred

Gatty. (Bell and DaMy.)—This magazine promises to be an acquisi- tion to the children. There is in it a good mixture of grave and gay ; the grave is not dull, and the gay not silly. Of course, as this is the first number, we have only the beginnings of the several stories, but they all promise well. "The Cousins and their Friends "is much =ore amusing than most of the entertainment that is prepared for older folk, and there are two pretty little poems, the shorter of which we ex- tract, as a specimen of the literary merits of this little magazine. It is called " Shelter:"—

" By the wide lake's margin I marked her lie— The wide, weird lake where the rushes sigh—

A fair young thing, with a shy, soft eye; And I deemed that her thoughts had flown To her home, and her brethren, and sisters dear, As she lay there, watching the dark, deep mere, All motionless, all alone.

"Then I heard a noise, as of men and boys, And a boisterous troop drew nigh.

Whither now will retreat those fairy feet?

Where hide till the storm pass by ?

One glance—the wild glance of a hunted thing—

She east behind her ; she gave one spring ; And there followed a splash and a broadening ring On the lake where the rushes sigh.

"She had gone from the ken of ungentle men !

Yet scarce did I mourn for that,

For I knew she was safe in her own home then, And, the danger past, would appear again, For she was a water-rat!"