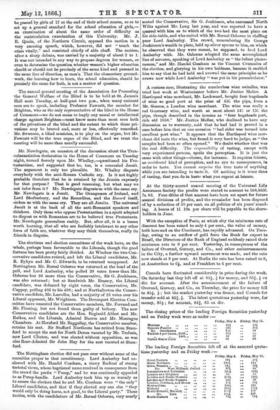 Page 3, 12 May 1866 — The Nottingham election did not pass over without some of
Close

The Nottingham election did not pass over without some of

the amenities proper to that constituency. Lord Amberley had co- alesced with Mr. Handel Cossham, a viewy Radical of strong teetotal views, whose baptismal name received in consequence from the crowd the prefix "Pump," and he was continually appealed to as Pump-handle. Lord Amberley took him tip so warmly as to assure the electors that he and Mr. Cossham were "the only" Liberal candidates, and that if they ele.cteel any one else "they would only be doing harm, not good, to the Liberal party." These tactics, with the candidature of Mr. Bernal Osborne, very nearly seated the Conservative, Sir G. Jenkinson, who canvassed North Wilts against Mr. Long last year, awl was reported to have a quarrel with him as to which of the two had the most plate on his side-table, and who united with Mr. Bernal Osborne in chiffing poor Lord Ataberley. The crowd, remembering Sir George Jenkinson's wealth in plate, held up silver spoons to him, on which he oinerved that they were meant, he vposed, to feed Lord Amberley with. Mr. Osborne adopted the seine accomplished line of sarcasm, speaking of Lord Amberley as "the infant pheno- menon," and Mr. Handel Coasham an the Vincent Crtuntnles of the election, and glorying in his own baldness, bemuse it enabled him to say that he had held and avowed the same principles as he avows now while Lord Amberley "was yet in his perambulator."