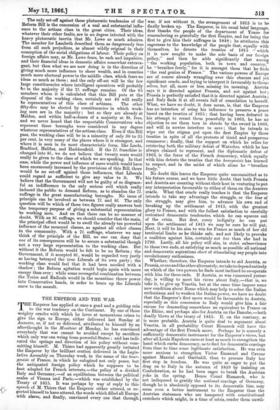 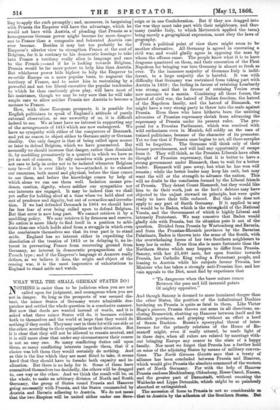 THE EMPEROR AND THE WAR.

THE Emperor has applied at once a goad and a guiding rein to the war tendency on the Continent. By one of those weighty oracles with which he loves at momentous crises to ,give the sign to Europe, either delivered last Sunday at Auxerre, or, if not so delivered, attributed to himself by an -afterthought in the Moniteur of Monday, he has convinced everybody that war cannot be avoided except by sacrifices which only war can wring from powerful States ; and has indi- cated the springs and direction of his policy without com- mitting himself. M. Thiers had apparently greatly irritated the Emperor by the brilliant oration delivered in the Legis- lative Assembly on Thursday week, in the name of the bour- geoisie of France, in which he eulogized not only peace, but the antiquated foreign policy which he supposes to be best adapted for French interests,—the policy of a divided Italy and Germany,—of an equilibrium between the political scales of Vienna and Paris,—which was established by the Treaty of 1815. It was perhaps by way of reply to this speech of M. Thiers that the Emperor either uttered, or re- forted himself to have uttered, the words which filled all Europe with alarm, and finally, convinced every one that through

war, if not without it, the arrangement of 1815 is to be finally broken up. The Emperor, in his usual brief language, first thanks the people of the department of Yonne for remembering so gratefully the first Empire, and for being the first to give him their suffrages in 1848; he attributes this eagerness to the knowledge of the people that, equally with themselves, he detests the treaties of 1815 "which it is now sought to make the sole basis of our foreign policy," and then he adds significantly that among "the working population, both in town and country," he "breathes freely," for it is amongst them that he finds "the real genius of France." The various powers of Europe are of course already wrangling over this obscure and yet significant oracle, and trying to interpret it favourably to them- selves, but all, more or less, missing its meaning. Austria says it is directed against Prussia, and not against her ; Prussia is perfectly satisfied that it is directed against Austria ; and Italy finds it at all events full of consolation to herself. What, we have no doubt, it does mean, is, that the Emperor has no intention of using his influence to preserve a peace based on the treaties of 1815; that having been defeated in his attempt to recast them peacefully in 1863, he has no objection to see them torn in shreds by the sword in 1866, and will in nowise interfere to save ; that he intends to wipe out the stigma put upon the first Empire by those treaties in spite of all the protests of timid and prosperous commerce ; finally, that the support on which he relies for retrieving both the military defeat of Waterloo, which he has always claimed to represent, and the diplomatic defeat of 1863, is the force of the French democracy, which equally with him detests the treaties that the bourgeoisie has learned to respect, and in the midst of which alone he "breathes freely."

No doubt this leaves the Emperor quite uncommitted as to his future course, and we have little doubt that both Prussia and Austria are counting without their host in venturing to put any interpretation favourable to either of them on the Auxerre oracle. What that oracle really teaches is that the Emperor intends to take any advantage the struggle, or the fear of the struggle, may give him, to advance his own end of breaking up the settlement of 1815, with the greatest glory to France, and with the fullest satisfaction to carefully restrained democratic tendencies, which he can squeeze out of the crisis. But first, every indignity he can put upon the settlement of 1815 we may be sure he will put. Next, it will be his aim to win for France as much of her old territorial limits as he thinks safe, and not likely to provoke a coalition against him, .certainly not less than she had in 1790. Lastly, all his policy will aim, in strict subservience to these two ends, at satisfying as much as possible all national and democratic aspirations short of stimulating any people into revolutionary enthusiasm.

Whether, therefore, the Emperor intends to aid Austria, or Prussia, or one and the other alternately, we take to depend entirely on which of the two powers he finds most inclined to co-operate with him for these ends. If Austria, as was rumoured yester- day, is willing to meet his views about Italy,—that is, we take it, to give up Venetia, but at the same time impose some new condition about Rome which may help to sober the Italian enthusiasm and to weaken the Italian power, we have no doubt that the Emperor's first move would be favourable to Austria, especially as this concession to Italy would give him a fair excuse for demanding somewhere an equivalent to France on the Rhine, and perhaps also for Austria on the Danube,—both deadly blows at the treaty of 1815. If, on the contrary, as is more probable, Austria is quite deaf to argument about Venetia, in all probability Count Bismarck will have the advantage of the first French move. Perhaps he is scarcely a sufficiently democratic instrument for the Emperor's views, but after all Louis Napoleon cares at least as much to strengthen the hand which curbs democracy, as to find for democratic cravings from time to time some legitimate satisfaction. He was even more anxious to strengthen Victor Emanuel and °avow. against Mazzini and Garibaldi, than to procure Italy her first step in freedom. He was quite as eager to put the drag on to Italy in the autumn of 1859 by iodating on Confederation, as he had been eager to break the Austrian yoke in the spring. Hence Count Bismarck, who is not indisposed to gratify the national cravings of Germany, though he is absolutely opposed to its democratic bias, may seem even a better instrument to the Emperor than the Austrian statesmen who are hampered with constitutional crotchets which might, in a time of crisis, render them unwil- ling to apply the curb promptly ; and, moreover, in bargaining with Prussia the Emperor will have the advantage, which he would not have with Austria, of pleading that Prussia as a homogeneous German power might become far more danger- ous to France than a composite and federated Austria can ever become. Besides it may but too probably be the Emperor's ulterior view to strengthen France at the cost of Belgium, for it is contrary to his democratic leanings to take into France a territory really alien in language and race to the French ;—and if he is looking towards Belgium, Prussia would be far more potent to help him than Austria. But whichever power bids highest to help the Emperor to re-settle Europe on a more popular basis, to augment the territory of France, and to assist him in restraining by a powerful and not too liberal executive the popular tendencies to which he thus cautiously gives play, will have most of his assistance, though we may be very sure that he will take ample care to allow neither Prussia nor Austria to become a menace to France.

How, with these European prospects, it is possible for English politicians to speak of England's attitude of purely external observation, as one unworthy of us, it is difficult indeed to see. We at least have no interest in supporting any of the arrangements of 1815 which are now endangered. We have no sympathy with either of the conquerors of Denmark, and yet no reason to object either to German unity or German duality. Our only danger is that of being called upon sooner or later to defend Belgium, which we have guaranteed. But assuredly we should increase that danger, rather than diminish it, by meddling prematurely in a quarrel in which we have as yet no sort of concern. To ally ourselves with powers we do not care to help in order not to be isolated whenever Belgium may be—if it is ever likely to be—attacked, is to exhaust our resources, both moral and physical, before the time comes to use them, and before the knowledge comes by help of which alone we can use them well. Isolation means pru- dence, caution, dignity, where neither our sympathies nor our interests are engaged. It may be indeed that we shall yet suffer for holding aloof at a time when we held aloof not out of prudence and dignity, but out of cowardice and irresolu- tion. If we had defended Denmark in 1864 we should have far less fear of ever being called upon to defend Belgium. But that error is now long past. We cannot retrieve it by a meddling policy. We may retrieve it by firmness and reserve. No nation is more likely to find itself in a position to arbi- trate than one which holds aloof from a struggle in which even the combatants themselves see that its true part is to stand aside. England has no interest either in expediting the dissolution of the treaties of 1815 or in delaying it, no in- terest in preventing France from recovering ground from Germany, no interest in democratic propagandism of the French type ; and if the Emperor's language at Auxerre really defines, as we believe it does, the origin and object of the coming war, it is the most impressive of exhortations to England to stand aside and watch.