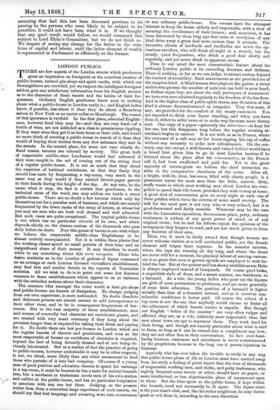 The common idea amongst the outer world is that gin-shops and public-houses are haunts of dissipation. No charge, judging from our own experience, is more unfounded. No doubt dissolute and dishonest persons are almost certain to add intemperence to their other vices, and to be in consequence frequenters of bar- rooms. But in the vast majority of these establishments, men and women of avowedly bad character are unwelcome guests, and are treated with very scant ceremony if they hang about the premises longer than is required for taking their drink and paying for it. No doubt there are low pot-houses in London which are the regular haunts of thieves and prostitutes, and even at the most respectable of houses no certificate of character is required, beyond the fact of being decently dressed and of not being ob- viously intoxicated. But as a matter of fact the practice of going to public-houses, however undesirable it may be in other respects, is not, we think, more likely than any other amusement to lead those who partake of it into bad company. Of course if a young man of good position and education chooses to spend his earnings in a tap-room, it must be because he has a taste for society beneath him, but a mechanic or tradesman meets men of his own station and calibre at the public-house, and has no particular temptation to associate with any one but them. Judging, as the present writer does, from a somewhat large experience of such resorts, we should say that foul language and swearing were rare occurrences in any ordinary public-house. The owners have the strongest interest to keep the house orderly and respectable, with a view of securing the continuance of their licence; and, moreover, it has been discovered by them long ago that noise or rowdyism of any kind drive away a great deal more custom than it attracts. The favourite clients of landlords and landladies are never the up- roarious revellers, who will drink all night at a stretch, but the steady, quiet frequenters, who drink a good deal slowly and regularly, and yet never drink to apparent excess.

Thus to our mind the most characteristic feature about the ordinary London public is its exceeding decorum and dullness.

There is nothing, as far as we can judge, to attract custom beyond the instinct of sociability. Such amusements as are provided are of the simplest kind. A blind woman who plays on the guitar, a street urchin who guesses the number of nuts you can hold in your hand, an Italian organ boy, are about the only purveyors of amusement we have ever seen admitted regularly to the freedom of the bar floor.

And in the higher class of public spirit stores, any diversion of this kind is always discountenanced as irregular. Very few seats, if any, are provided for the comfort of the weary customers. You are expected to drink your liquor standing, and when you have done it, either to order more or to make way for some more thirsty soul. One copy of a paper—generally the Advertiser—is kept for bar use, but this disappears long before the regular evening at- tendance begins in earnest. It is not with us as in France, where- the customer of a cafe may sit for hours sipping his cup of coffee- without any necessity to order new refreshments. On the con- trary, any one except a well-known and valued habitué would have a broad hint given him to go in most London taverns if he' loitered about the place after his consommation, as the French call it, had been swallowed and paid for. Yet to the great majority of tavern-goers we believe the chief attraction re- sides in the comparative cheeriness of the scene. After all, a bright, well-lit, clear, bar-room, filled with chatty people, is a.

pleasanter resort for most men than the little, narrow, dirty, stuffy rooms in which most working men about London are com- pelled to spend their idle hours, provided they wish to stop at home.

A great deal of conversation goes on every night at each one of these publics which form the centres of some small society. The talk for the most part is not very wise or very refined, but it is good-humoured and fairly sensible. Whatever may be the ease with the Lancashire operatives, the.common-place, petty, ordinary tradesman is seldom of any great power of mind, or of any

original views ; but he and his fellows repeat the opinions of the newspapers they happen to read, and are not much given to form any theories of their own.

Then, too, it must be fairly ownel that though women are never welcome visitors at a well conducted public, yet the female element still reigns there supreme. In the monster taverns, where the taps are running all day long, and where the doors are never still for a moment, the physical labour of serving custom- ers is so great that men or grown-up lads are employed to wait be- hind the bar. But at the quieter and less showy establishments Hebe is always employed instead of Ganymede. Of course good looks, a coquettish style of dress, and a smart manner, are desiderata to a barmaid. As a rule, the young ladies who pour out the liquors are girls of some pretensions to prettiness, aud are more generally of some little education. The position of a barmaid is higher socially than that of a domestic servant, and as it involves con- siderable confidence is better paid. Of course the school of a tap-room is not the one that anybody would choose to foster all the refinement of which female nature is capable. But though our English "ladies of the counter" are very often vulgar and affected, they are, as a rule, infinitely more respectable than fast men about town are apt to represent them. They work hard for their living, and though not exactly particular about what is said to them, so long as it can be turned into a compliment any how, they are not often free in their conversation. In fact over-fami- liarity between customers and attendants is never countenanced by the proprietors, because in the long run it prows injurious to business.

Anybody who has ever taken the trouble to study in any way this public-house phase of life in London must have carried away from his study a feeling of great regret that the tens of thousands of respectable working men, and clerks, and petty tradesmen, who nightly frequent some tavern or other, should have no gayer, or more intellectual, or less objectionable place of amusement open to them. But the time spent at the public, house, if kept within due bounds, need not necessarily be ill spent. The liquor-store is the poor man's club, and, like his richer neighbour, he may derive good or evil from it, according to his own discretion