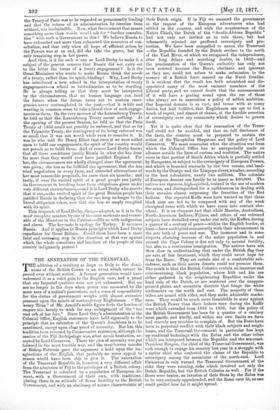 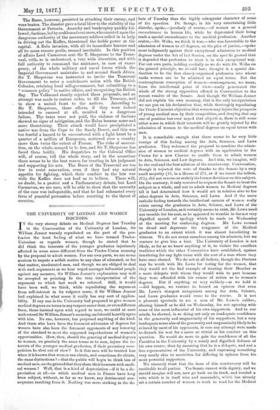 THE ANNEXATION OF THE TRANSVAAL.

THE addition of a territory as large as Italy to the domi- nions of the British Crown is an event which cannot be passed over without notice. A former generation would have welcomed it as a solid gain to the English race, and a proof that our Imperial qualities were not yet exhausted. But we are no longer in the days when power was measured by the mere area of a nation's possessions, and a sense of responsibility for the duties of government weighs with almost excessive pressure upon the minds of contemporary Englishmen. "The weary Titan " of Mr. Arnold's noble figure feels the burden of empire too keenly to wish for any enlargement of the " too vast orb of her fate." Since Lord Grey's administration of the Colonial Office, English statesmen have held rigorously to the principle that no extension of the Queen's dominions is to be sanctioned, except upon clear proof of necessity. Nor has this tradition been reversed by Conservative statesmen, although the cession of the Fiji Archipelago was, after much hesitation, ac- cepted by Lord Oarnarvon. There the plea of necessity was put forward in the most forcible way, and the treacherous murder of Bishop Patteson gave the argument a hold upon the im- aginations of the English that probably no mere appeal to mason would have been able to give it. The annexation of the Transvaal Republic is, however, a very different affair from the admission of Fiji to the privileges of a British colony. The Transvaal is colonised by a population of European de- scent, with a Government of their own, with traditions, placing them in an attitude of fierce hostility to the British Government, and with an obstinacy of nature characteristic of their Dutch origin. If in Fiji we assumed the government at the request of the European adventurers who had

settled in the- country, and with the acquiescence of the

Native Chiefs, the Dutch of the " South-African Republic " had not only not invited us to rule them, but had vehemently rejected our proffered sovereignty and pro- tection. We have been compelled to annex the Transvaal —the Republic founded by the Dutch settlers to the north of the Vaal River, of which we recognised the independence, after long delays and searching doubts, in 1852—and the proclamation of the Queen's authority has only not been resisted because the Boers, obstinate and ignorant as they are, could not refuse to make submission to the menace of a British force massed on the Natal frontier. It is evident that the result has both astonished and dis- appointed many of the most eminent members of the Liberal party, and we cannot doubt that the announcement of it will have a grating sound upon the ear of those who always see in annexation a policy of selfish ambition.

Our Imperial domain is so vast, and teems with so many duties, but half fulfilled, that Englishmen are apt to feel a

touch of regret, and almost of shame, at the forcible assertion of sovereignty over any community which desires to govern itself.

Yet it is quite clear that the annexation of the Trans- vaal could not be avoided, and that on full disclosure of the facts, the country must be prepared to sustain the action of Sir Theophilus Shepstone and the policy of Lord Carnarvon. We must remember what the situation was from which the Colonial Office has so unexpectedly made an advance outside the lines of custom and tradition. The native races in that portion of South Africa which is partially settled by Europeans, or subject to the sovereignty of European Powers, and which is bounded seawards by the two oceans, and land- wards by the Orange and the Limpopo rivers, number, according to the best calculation, nearly two millions. The colonists of European descent can hardly be as many as 400,000. The natives are vigorous, high-spirited, trained in the use of modem

fire-arms, and distinguished for a ruthlessness in dealing with their enemies almost surpassing the ferocities of the Red Indians. Our repeated Kaffir wars have warned us that these black men are not to be compared with any of the weak aboriginal races with which we have come into contact else- where. It is an eloquent fact that while Maories, Australians, North-American Indians, Fijians, and others of our coloured subjects have dwindled away under our rule, the Kaffirs, during a quarter of a century of peace—within the English border, at least—have multiplied concurrently with their advancement in the arts both of peace and war. The immense and in some respects alarming increase of the native population in and around the Cape Colony is due not only to natural fertility, but also to a continuous immigration. The natives have not liben slow in understanding that under the British flag they are sure of fair treatment, which they could never hope for from the Boers. They are certain also of a comfortable sub- sistence, such as their native deserts could not promise them. The result is that the British Colonies ccntain an immense and ever-increasing black population, whose kith and kin are either gathered in the neighbouring Republics under the hard rule of the Dutch, or are scattered over the unappro- priated plains and mountain districts that fringe the white settlements on the north and east. The majority of these tribes are armed with rifles, and they make admirable marks- men. They would be much more formidable in arms against the British Power than their fathers were during the Kaffir wars which extended from 1816 to 1853, but the policy of the British Government has been for a quarter of a century most pacific and kindly, and within our own limits we have had scarcely any troubles to complain of. But the Boers have been in perpetual conflict with their black subjects and neigh- bours, and the Transvaal Government in particular has kept up continual bickerings with the Zulus and the other tribes which are interposed between the Republic and the sea-coast. President Burgers, the chief of the Transvaal Government, was rash enough to engage his country last year in a struggle with a native chief who contested the claims of the Republic to sovereignty among the mountains of the north-east. Lord Carnarvon in vain warned the Transvaal Government of the risks they were running, risks which involved not only the Dutch Republic, but the British Colonies as well. For if the Boers were beaten, an invasion of their State by the Zulus was to be very seriously apprehended, and the flame once lit, no one could predict how far it might spread. The Boers, however, persisted in attacking their enemy, and were beaten. The disaster gave a fatal blow to the stability of the Government at Pretoria. Anarchy and bankruptcy quickly fol- lowed; factions, led by reckless adventurers,who counted upon the dangerous authority of the mercenary soldiers called in to help in driving out the Kaffirs, threatened the feeble power at the capital. A Zulu invasion, with all its immediate horrors and all its more remote perils, seemed inevitable. In this position of affairs Lord Carnarvon sent Sir T. Shepstone to the Trans- vaal, with, as is understood, a very wide discretion, and with full authority to command the assistance, in case of emer- gency, of the whole military and naval forces which the Imperial Government maintains in and around South Africa. Sir T. Shepstone was instructed to invite the Transvaal Government to enter a confederate union with the British Colonies, retaining local self-government, but submitting to a " common policy" in native affairs, and recognising the British flag. The Volksraad stoutly rejected these proposals, and an attempt was made to restore order, to fill the Treasury, and to show a united front to the natives. According to Sir T. Shepstone, these efforts, if they were indeed intended to succeed at all, resulted in a dangerous failure. The taxes were not paid, the violence of factions showed no signs of mitigation,and the Zulus became more and more threatening. Their attack would have precipitated a native war from the Cape to the Sandy Desert, and this was too fearful a hazard to be encountered with a light heart by a quarter of a million of Europeans, scattered over a country more than twice the extent of France. The risks of annexa- tion, on the whole, seemed to b3 less, and Sir T. Shepstone has faced them boldly. His despatches to the Colonial Office will, of course, tell the whole story, and in the meantime there seems to be the best reason for trusting in his judgment and supporting his acts. The Boers of the Transvaal are too few to resist annexation, even if they had any natural appetite for fighting, which their conduct in the late war with the Kaffirs does not lead us to believe. There will, no doubt, be a protest and a Parliamentary debate, but Lord Carnarvon, we are sure, will be able to show that the necessity of the case was indisputable, and that he had exhausted every form of peaceful persuasion before resorting to the threat of coercion.