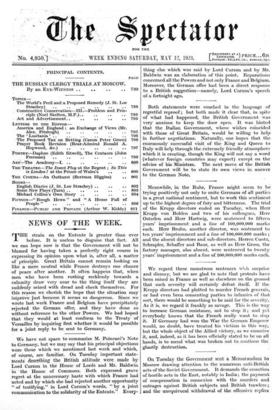 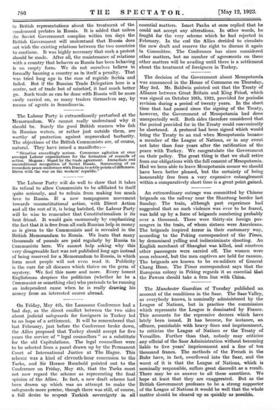 Page 1, 12 May 1923 — On Tuesday the Government sent a Memorandum to Moscow drawing
Close

On Tuesday the Government sent a Memorandum to Moscow drawing

attention_ to the numerous anti-British acts of the Soviet Government. It demands the cessation of hostile acts in the East, notably in India ; the payment of compensation in connexion with the murders and outrages against British subjects and British trawlers ; and the unequivocal withdrawal of the offensive replies to British representations about the treatment of the condemned prelates in Russia. It is added that unless the Soviet Government complies within ten days the British Government will understand that Russia does not wish the existing relations between the two countries to continue. It was highly necessary that such a protest should be made. After all, the maintenance of relations with a country that behaves as Russia has been behaving is an empty form. We do not ourselves believe in formally banning a country as in itself a penalty. That was tried long ago in the case of regicide Serbia and failed. But if the Russian Trade Delegation here is a centre, not of trade but of mischief, it had much better go. Such trade as can he done with Russia will be more easily carried on, as many traders themselves say, by means of agents in Scandinavia.