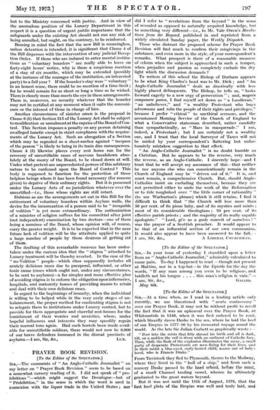 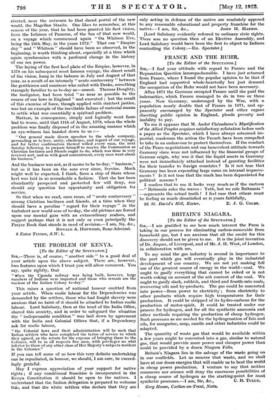 [To the Editor of the SPECTATOR.] SIR,—At a time when,

as I read in a leading article only recently, we are threatened with " acute controversy " over our Prayer Book, it may not be without profit to recall the fact that it was an upheaval over the Prayer Book, at Whitsuntide in 1549, when it was first ordered to be read, which literally drove Drake to the sea, where he laid the keel of our Empire in 1577-80 by his immortal voyage round the world. As the late Sir Julian Corbett so graphically wrote :- " Peer into the mists that fitly shroud his birth and all is dark, till, on a sudden the veil is riven with an outburst of Catholic fury. Then, while the flash of the explosion illuminates the scene, a small party of desperate Protestants are seen flying for their lives, and in their midst a blue-eyed, curly-haired child, scarce out of baby- hood, who is Francis Drake."

From Tavistock they fled to Plymouth, thence to the Medway, where they lived in the " hull of a ship," and -from such a nursery Drake passed to the hard school, before the mast, of a small Channel trading vessel, whence he ultimately

graduated to the great waters beyond.

first keel plate of the Empire was well and truly laid, and

riveted, near the entrance to that dread portal of the new world, the Magellan Straits. One likes to remember, at this season of the year, that he had been granted his first vision, from the Isthmus of Panama, of the Sea of that new world, on a voyage which commenced again " On Whitson Eve, being the 24th May, in the yeare 1572." That our " Empire day " and " Whitson " should have been so observed, in the beginning, is worth thinking about, especially at a time which again synchronizes with a profound change in the history of our sea power.

The laying of the first keel plate of the Empire, however, in 1578 on his subsequent most famous voyage, the direct result of the vision, hung .in the balance in July and August of that year, as a result of an intensely " acute controversy " between the gentlemen and mariners who sailed with Drake, something strangely familiar to us to-day as—unrest. Thomas Doughty, the instigator, had been tried " as near as possible to the course of our laws in England " and executed ; but the result of this exercise of force, though applied with strictest justice, was but an example of the inevitable failure of material means to settle what was essentially a spiritual problem.

Matters, in consequence, simply and logically went from bad to worse, until that 11th of August, 1578, when the whole problem was finally disposed of in the amazing manner which an eye-witness has handed down to us :—

" Our general made divers speeches to the whole company, persuading us to love, unity, obedience, and regard of our voyage, and for better confirmation thereof willed every man, the next Sunday following, to prepare himself to receive the Communion as Christian brethren and friends ought to do, which was done in very reverent sort, and so with good contentment, every man went about his business."

And the business was not, as it seems to be to-day, " business," but as it has been on the seas ever since, Service. Much might well be expected, I think, from a ship of State whose keel was laid in so remarkable a fashion. That she has been abundantly prospered and protected few will deny, nor should any question her opportunity and obligation for service.

So that when we read, once more, of " acute controversy " among Christian brethren and friends, at a time when they should have a peculiar " regard for their voyage " in the turbulent new world seas of to-day, the old pictures are forced upon our mental gaze with an extraordinary realism, and suggest perhaps that it is not only or even principally the Prayer Book that stands in need of revision.—I am, Sir, &c., RONALD A. HOPWOOD, Rear-Admiral. 8 Eaton Terrace, S.W.1.