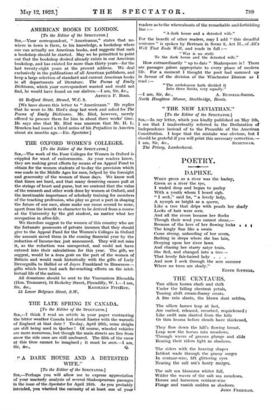 A DARK HOUSE AND A DETESTED WIFE."

Si ,—Perhaps you will allow me to express appreciation of your masterly analysis of several Shakespearean passages in the issue of the Spectator for April 28th. As you probably intended, you whetted the curiosity of at least one of your readers as to the whereabouts of the remarkable and forbidding line " A dark house• and a detested wife."

For the benefit of other readers, may I add " this dreadful sentence " is spoken by Bertram in Scene 8, Act II., of All's Well That Ends Well, and reads in full:

" War is no strife

To the dark house and the detested wife."

How extraordinarily " up to date " Shakespeare is ! There are passages galore appropriate to every phase of modern life. For a moment I thought the poet had summed up in favour of the division of the Winchester Diocese as I read :— " The archdeacon hath divided it Into three limits, very equally."